TV loves wet eyes and fire and it got plenty of both on Wednesday. They flowed and blazed as the nation reeled from Tuesday’s claims by amateur President Donald Trump that Nazis, the Ku Klux Klan and other racial hate groups attracted some “very fine people” to last Friday’s torch-lit march and Saturday’s violent clashes in the streets.

One woman died and many were injured by an angry white racist who drove his car through counter-demonstrators in Charlottesville, Va. Wednesday’s TV reporting on the three major cable news channels included a spectacular 9 p.m. hour of Anderson Cooper 360 on CNN.

At issue is the removal of a statue of General Robert E. Lee, who led the Confederate armed forces in the Civil War in the 1860s in an unsuccessful rebellion to leave the United States and form a new nation to preserve the “rights” of the Southern states to keep black human beings in slavery.

In the first half hour, David Gergen—who knows his way around presidents—questioned the current president’s very sanity.

“Are you sound? Are you of good mind?” Gergen said of the 71-year-old, orange-faced, yellow-haired, Republican chief executive. “There are increasing questions tonight… about his emotional and mental stability. These issues are now arising among psychiatrists in the country.”

The second half of the show began abruptly when producers dared to cut short a beer commercial to go directly at 9:30 p.m. to a candlelight vigil in Charlottesville for Saturday’s victim, Heather Heyer, and those injured. Organizers kept it secret from the internet, CNN reported, spreading notice only by word of mouth for fear of a Nazi disruption.

No other network was on the ground there. CNN’s cameras and microphones covered the large group of people singing without instrumental accompaniment “We Shall Overcome,” “The Battle Hymn of the Republic,” “This Little Light of Mine” and “This Land Is My Land, This Land Is Your Land.”

Cooper wisely stayed silent for more than five minutes. The only other sound was the chirping of summer crickets between songs. Then he narrated and chatted briefly with his panel, while the images of candles stayed on the screen and the voices of harmony sounded softly beneath the CNN conversation.

Near the end of Cooper’s show, he showed a tear-filled interview with Micah and Tadrint Washington. Their car was hit from behind Saturday by the man who mowed down the counter-demonstrators. Micah said she remembered seeing Heather Heyer on the ground and the medic trying CPR.

Tadrint said “God put us there” because, had the man not crashed into their car first, he may have had more space and speed and time to run down and kill and hurt even more.

“It made me feel very afraid,” she said, her voice choking, her eyes moist. “I’m alive. I survived.”

An unexpected show of sympathy for the victims—and fear of the current presidential regime—came on Fox & Friends, a morning propaganda pageant that usually distorts reality in a way that pleases the most important viewer, Trump, who tends to believe what he sees and hears on this show.

But producers Wednesday booked a black Republican and a black Democrat who didn’t want to argue with each other about Confederate statues in the usual Punch and Judy Fox format.

Instead, Republican consultant Gianno Caldwell needed a handkerchief to wipe his tears when he expressed the fear and dismay that some African-American Republicans must be feeling toward a president whose father was once arrested at a Ku Klux Klan rally.

“Last night, I couldn’t sleep at all because President Trump, our president, literally betrayed the conscience of our country,” he told Fox’s Abby Huntsman. “He has failed. Mr. President, good people don’t pal around with Nazis and white supremacists.”

Agreeing and also tearing up was Wendy Osefo, a Democrat and professor at Johns Hopkins. She called Trump “morally bankrupt” and said “I’m sorry this is where we are. It’s disturbing.”

More tears came in the noon hour on Fox on Outnumbered when Melissa Francis began to sob after giving up her half-hearted defense of Trump.

“I know what’s in my heart,” she said. “I know that I don’t think anyone is different, better or worse, based on the color of their skin. But I feel there is nothing anyone can say right now without being judged.”

A different sort of tears—tears of fear—came from Christopher Cantwell, the right-wing extremist who organized the fatal rally and now fears he will be arrested. Cantwell spoke on an internet video posting. “Bullies are frequently also sniveling cowards,” Cooper said as he introduced the video.

Cooper returned to the screen.

Speaking of the Third Reich, Chris Matthews opened Hardball on MSNBC Wednesday by alternating color images of Friday’s torch rally with black-and-white film of Nazis marching with torches in Germany in the 1930s.

The scenes from Friday were put together by Vice News, which filmed a documentary for HBO about last weekend’s events near the University of Virginia. Parts of it are already available on the internet.

Much of it shows interviews of Cantwell. He complains that Trump let his daughter marry a Jew. The edits in the film sample look like cuts by Leni Riefenstahl, Hitler’s favorite moviemaker.

Although the film was available to all, only CNN and MSNBC used it in heavy rotation. Fox generally ignored it or minimized it, showing only the least-appalling snips.

How strange, Fox and fire. When Fox got ahold of film of a fire in Benghazi, Libya, in which four Americans died in 2012, the network showed it like a year-round Yule log every time some right winger burped the word “Benghazi!” to attack then Secretary of State Hillary Clinton.

And when roving bands of black youths ever turn over and burn a police car in a protest against a police killing, Fox loves to show those conflagrations from every angle, over and over again.

But Wednesday viewers never got to see the bearers of the burning torches or to hear their chanting of “Blood and Soil!” on Trump-fluffer Fox shows like Tucker Carlson Tonight and Hannity. A notable exception for the alternative facts world of Fox was Shepard Smith in the 3 p.m. hour

“So far,” he said, “we’ve been unable to find the very fine people protesting with the white supremacists.” 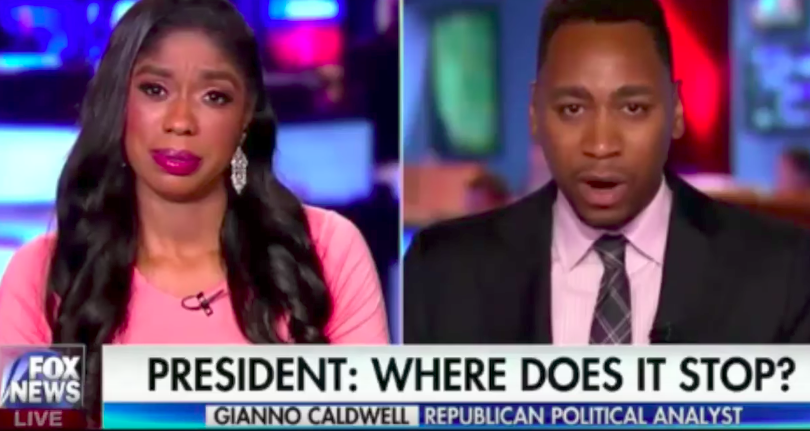