A lot of the choices being made on Game of Thrones this season suggest that the individuals who are vying for power are trying to avoid the blunders of those that have come before. Some are learning from their own past errors in judgment (see: Jaime), while others are taking cues from figures who tormented them in the past. Cersei’s lipstick, inspired by the one used by Ellaria Sand to kill her daughter, definitely wouldn’t pass FDA regulations, meanwhile Sansa appears to be taking lessons and hairstyle cues from the woman who had a hand in killing her parents and brother.

Maintaining legacy, and in some cases birthright, while avoiding the sins of fallen fathers seems to be on everyone’s mind. A strong brand needs a strong visual, and between the lions, dragons and wolves there is plenty of brand awareness. The show’s costume designer Michele Clapton weaves the past and present together with attention to these legacies. The shape and style of Cersei’s black garb nods strongly towards the tunics worn by her father, Tywin. Seeing her deal with the Iron Bank is a good reminder of how much Cersei learned from her father in terms of negotiation and persuasion. It also helps that she repeats the nifty catch phrase: “Lannisters always pay their debts.”

Tywin’s influence may work its way into Cersei’s maneuvers and wardrobe, but she is far from a mirror image. Cersei takes the symbol of the Lannister lion to new, glamorous heights with her shoulder, neck and chest pieces. She is also far more sadistic than her father ever was, and the super sparkly addition to her dress in “The Queen’s Justice” looks more Baratheon (the name of her late husband) in its antler-esque detail, catching the candlelight perfectly as she dishes out her lipstick vengeance.

And after being shorn last season Cersei hasn’t yet grown out her pixie cut—who knows how time works in Westeros—but Sansa has started wearing her long hair in the style the power-hungry Queen formerly sported, which has set alarm bells ringing for some. Sansa’s hair might be Cersei inspired, but the rest of her look is full Stark. And as this Elle article notes, it isn’t just Cersei who is providing Sansa with hairstyle inspiration, mother Stark favored a similar look while she was alive.

Goth Sansa, the likes of whom we first saw back in Riverrun when she finally ditched the embroidered floral gowns, seems to be making a comeback here, though perhaps with a more stately flair. She’s dressed for winter in dark attire, replacing the green frock with a wolf embroidered on its bodice that she apparently knocked up with a needle and thread while at the Wall (where else could it have come from?).

But gone are the feathers of goth Sansa, replaced by wolf imagery, fur cuffs and silver wolf clasps. She seems to have returned to a favorite old necklace, too, but while similar in shape, it’s actually a different one from at the end of season four. The large halved-circle it featured has been swapped for a whole one, perhaps suggesting Sansa is no longer being split in two by the marriages she was forced into. This Sansa has agency. The chain and pointed spike at the end are the same as the earlier model. When Michele Clapton spoke to Racked, she referred to this piece as Sansa’s version of her younger sister’s sword, Needle. Another nod to the Stark bond. There’s also a touch of her mother’s family in the fish-like scales of the dress she wore this week. As Clapton notes, Sansa has not forgotten her roots.

With Littlefinger whispering in her ear, some worry Sansa might drift away from her Stark morals, but she seems to be handling herself well in fending off his advice. He gives guidance as though he’s just watched the Westeros version of The Godfather. Hopefully one of the Starks will not be the Fredo of their family. Maybe I have a little of her father’s naiveté, but I have faith in the eldest Stark daughter to do the right thing. She is already thinking ahead, organizing food supplies and planning to protect the army in winter with breastplates covered in leather for warmth. Victory can sometimes depend on the littlest of details.

Jon Snow is already wearing his winter-ready breastplate. When he arrives at Dragonstone his signature fur is packed away and the symbol of the wolf adorns his chest. It’s interesting that it isn’t until later, brooding on the cliffs, that he cloaks himself again in fur—an evident symbol of his father’s house. Wrapping himself up in the image of Ned Stark, he contemplates whether this trip south was a mistake. But as Jon points out to Tyrion when he notes that “Stark men don’t fare well when they travel south,” in name he is not a Stark, despite the clothing he wears.

Tyrion replies that both are lucky for not being like their fathers. It’s a point Daenerys has been struggling to make this season as well. While she may not be the last Targaryen, right now she believes she is, and her arrival at Dragonstone included a significant style change. Before season seven Daenerys wore mostly shades of blue edging to the white end of that spectrum. Dragon jewelry has long been a vital part of Daenerys’ costuming—even when her dragons deserted her—with a whole array of chokers, cuffs and pendants featuring the motif. She has since ditched the blues gowns in favor of black and gray clothing, and the opulent neck sculptures have been switched for somewhat toned-down brooch versions. A brooch can be just as visually arresting as an elaborate choker, as the women on Feud and The Good Fight can attest.

The visual link between Stark and Targaryen can also be seen in the similarities between the chains Sansa and Daenerys wear. These women could be great allies, and the recently returned Bran holds the key to unlocking this shared heritage.

Daenerys is embracing her family name through her costuming in a way we haven’t seen before; yes the dragon imagery is important, but now she is also wearing the Targaryen colors of black and red. The Targaryen brand has been tainted by the actions of the Mad King, but Daenerys is not her father and while history has a habit of repeating, there is also room for change. But she is going to need to put her dragons to good use soon, and show Cersei what she can do with the beasts whose likenesses are emblazoned on all her chokers and chains. 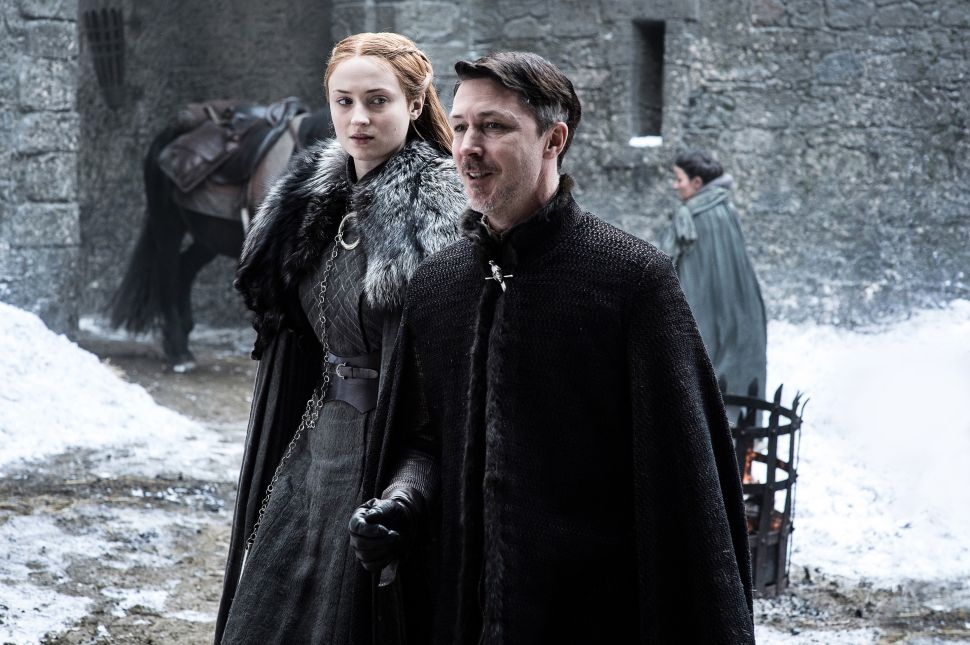