This post contains Stark (see what I did there?) discussion of last night’s episode of Game of Thrones, “The Spoils of War.” If you haven’t yet watched the episode, make like a weirwood tree and leave.

Well, that was certainly something, wasn’t it? After an enjoyable, highly-rated yet deliberately paced first half of season seven, Game of Thrones made it a point to prevent all viewers from sleeping last night with an overdose of adrenaline. The incumbency made moves to maintain its grasp of power, siblings reunited after years apart and oh yeah THERE WAS A FRIGGIN’ AIR RAID FROM A DRAGON. Nice parallel to The Field of Fire. With so much going on at once, it’s understandable if you left last night’s feeding frenzy with a few lingering questions.

Is Jaime alive or dead?

Let’s start with the biggest question: Jaime is alive because, come on, he’s obviously alive. For all of the wonderful holy s&%# moments in “The Spoils of War,” that cliffhanger was not one of them. Yes, his metaphorical and literal drowning under the crushing weight of his Lannister armor was a nice touch, but that fade to black didn’t feel 100% genuine.

Jaime has enjoyed one of the strongest arcs and been revealed to be one of the most layered characters on the show. Despite the atrocities committed by his family, Jaime has stayed the course of his redemptive path since season three. He may be fighting for the wrong Queen, but he’s still trying to be a better man.

In other words, he’s become too intertwined with the show’s central themes to be unceremoniously pronounced dead at the start of the next episode. Plus, he’s still got Cersei to kill.

What was Sansa’s reaction while she was watching Arya spar with Brienne?

At first, it was hard to get a read on what Sansa was feeling as she watched Arya match — and even best — Brienne in training. Was she jealous that Arya had amassed a more tangible sense of power than her own? Was she disappointed to see Brienne — her sworn protector — struggle against a young woman? Did she just want those damn kids to stop skateboarding in her courtyard?

Rewatching the scene and their earlier reunion, it seems more as if Sansa was disturbed by what life had turned her sister (and brother, and herself, and her whole family) into. Sansa’s father, mother and two of her brothers are dead. Bran’s an emotionless Tree Hacker and Jon’s been through all sorts of (Seven) Hells. Sansa herself been tortured and brutalized by a revolving door of villains. And now her little sister has been turned into a killing machine to survive.

It’s a realization of what each of them has lost and the price each of them has paid to keep going. It’s the loss of innocence and a firm reminder that though they are family, none of them are the same. Not anymore.

Did Jon bend the knee?

It’s very possible that amid all of the thick sexual tension that you could cut with dragonglass that Jon did not bend the knee during Daenerys’ rousing little speech. But, come on, he bent that sucker, right? Dany gave him all of the assurances he was looking for: commitment to a moral path, agreement to help fight the White Walkers, yadda, yadda, yadda. Strategically, it was the right play to swear fealty to her in that moment.

Based on the way they emerged from the cave — framed by first-time GoT director Matt Shakman as if they were almost walking hand-in-hand — and the fact that she not only sought his war advice but followed it, it seems like they have reached a union of sorts.

Also, aunt + nephew…are we wrong to be shipping this or what…? 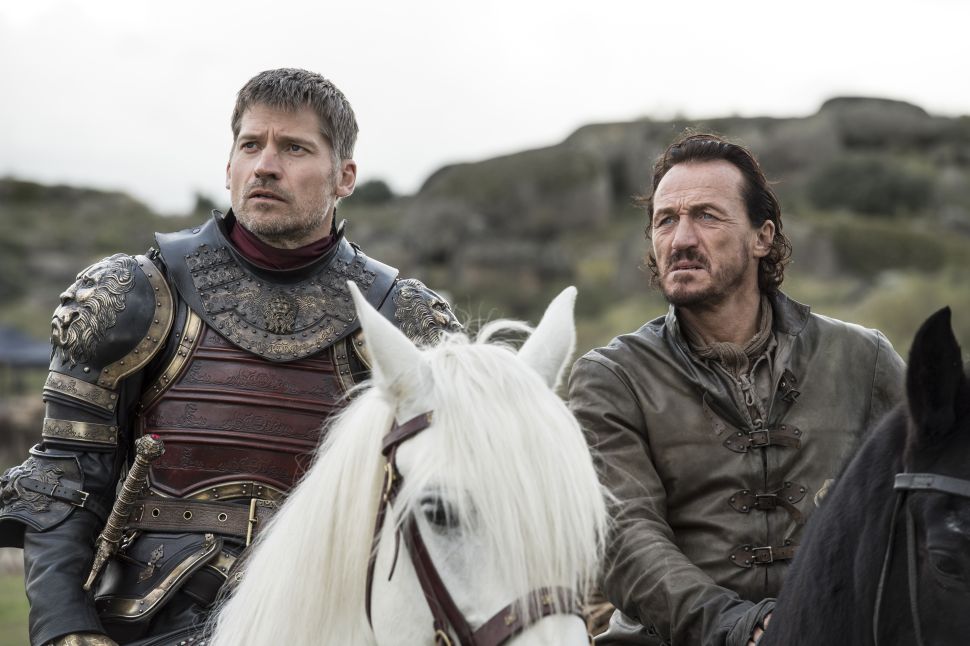