Since it began, Game of Thrones has been touted (as were George R.R. Martin’s A Song of Ice and Fire novels) as a different kind of fantasy series—one that subverts our expectations about the fantasy genre to become something more complex and relevant.

This contrast between classic fantasy and GoT—which had a more traditional episode Sunday night—has many elements, of course, but in general it involves the show’s outsized attention to the politics of its invented world. Yes, we still got our magical creatures and prophecies and brawny men in helmets, but now we also had men meeting around long tables, jockeying for power and attention while they debated the best way to deal with a looming economic crisis. Clearly, this was a new kind of fantasy show.

But now as the show swings quickly through its truncated seventh season on the way to its final chapter, it is beginning to seem like Game of Thrones is discarding some of this political complexity in favor of action and spectacle. In short, I am starting to wonder whether this show about politics may be transitioning in its last seasons into a show about war.

Certainly it has always been at least somewhat about war; Westeros has been pretty much constantly at war since King Robert (First of His Name) died way back in season 1, episode 7. The tactics, and the effects, of warfare have never been far from the central storyline of GoT or its main characters. And it’s not like we’ve been lacking for epic fight scenes, from the Battle of the Blackwater to Hardhome to the Battle of the Bastards.

Moreover, it’s not like we can draw a strict division between the wars and the politics of the show—since the outbreak of the conflict every political decision has been influenced by and seen through the lens of clashes raging elsewhere on the continent. War is, as Clausewitz said, the continuation of politics by other means.

But even if we consider war and politics to be one and the same, the stories we tell about them are not. A political thriller and a war epic are very different kinds of narratives. And increasingly, we seem to be finding ourselves more within the latter.

In earlier seasons, the emphasis of war scenes seemed to be on the effects of the battles—how they changed the landscape, the balance of power, the daily lives of regular citizens. And the important turning points, the events that actually changed things, were generally battles that happened offscreen, and which we heard about in throne rooms and council chambers. Or, even more often, these decisive moments weren’t battles at all: the murder of Renly Baratheon, the Red and Purple Weddings, the murder of Balon Greyjoy, and so on.

From the moment Dany stepped foot on Westeros, though, this began to change. The people standing around the war maps, the conversations they have while planning battles, are starting to appear less pivotal than the actual events they are planning. Euron’s nighttime ambush at sea, Grey Worm’s pyrrhic victory at Casterly Rock, the taking of Highgarden, and especially this week’s Loot Train Battle, these are situated as the key events, not the discussions about them, which are dramatic but less consequential. The emphasis has changed.

It is perhaps inevitable, as the show nears its endgame, with less space to tell its story, that the story would change in this way. Things are accelerating, with fewer moving pieces as the primary conflict coalesces around two rulers. And with shorter seasons, we simply have less opportunity to check in with all of the other players and see how events are affecting them and inspiring their next actions—a key element of any political narrative.

It especially robs us of a sense of how common people are affected by events, which previously added texture and complexity to the story of lords and ladies at war. Arya used to be our conduit for these scenes, as she moved through the world incognito, but now she is back among her highborn family and poised to finally become a major player in the story.

To really see how these differences affect the narrative, let’s take the latest and largest of the show’s epic battle sequences, this past episode’s Loot Train battle. In their post-episode recap, the showrunners make a big deal of the fact that this is the first time we’ve seen a battle where we care about characters on both sides of the conflict. We certainly don’t want to see Jaime’s redemptive arc cut short, and Bronn is always a charming addition to any scene. But it is also never in doubt which side of this conflict we are supposed to root for. We hope Jaime and Bronn will survive, but we want Daenerys to kick ass.

The show has pointedly made Dany the underdog, serving her several setbacks in a row, making us desire a win for her side, to even things out. And then it set up the whole battle as a reveal, from the hinting dialogue that precedes it—“The queen is not here.” “Where is she?”—to the drawn-out scenes of the Lannister army encamped, to the sound of distant hoof beats, and finally the dragon appearing suddenly, breathtakingly from the mist. We’ve never seen one of the dragons in battle before, and this whole scene primes us to be absolutely thrilled when it finally happens.

(Not coincidentally, the scene also visually echoes the appearance of Gandalf leading the charge of the Rohirrim at the Battle of Helms Deep in The Two Towers. A scene of a purely good hero turning the tide in a battle against pure evil.)

But this is all the more shocking when we consider that what we’re watching is basically Dany bringing an F-14 to a swordfight. She’s not simply pressing her advantage in battle; she’s raining devastation from above on rank-and-file soldiers. When we root for her and her dragon, we’re rooting for the slaughter of thousands. And that’s what it is, a slaughter, not necessarily warfare.

Contrast this with our horrified reaction when Cersei killed thousands herself, also with supernatural fire. The parallel is clearly intended here: It was Daenerys’ father who stockpiled all of that wildfire in the first place. And yet one is positioned as an act of evil, the other as a long-awaited triumph.

But of course they are, you’ll say. Cersei killed her own people—civilians!—for her own benefit, while Dany killed soldiers, in war. They’re totally different! Sure, but that’s the whole point: The kind of story that GoT is telling now is the kind where “horrible things happen in war” has become its own moral justification. In previous iterations of the show, a choice to do something like this would be a more difficult calculus. (Take, for instance, Catelyn’s decision not to execute Jaime. We are never told how to feel about this choice, and even now, when we have seen what became of Jaime, it is hard to say that it was the right decision.)

Of course, in the episodes and scenes leading up to this one, Tyrion has been urging Dany away from this course of action, but that doesn’t seem to detract from our thrill in seeing it happen. (The show seems to attempt to justify this by having her attack the soldiers on the road, rather than laying waste to King’s Landing itself—which is what Tyrion is specifically warning her against, turning her future subjects against her by burning their cities. But again, this makes it better only when we reduce things to military logic).

Increasingly, in fact, Tyrion seems to be being left behind by the narrative, as if he is still stuck in a political drama (his home turf) while a war story blooms around him. And Jon Snow, who also urged against this course of action, occupies an even more interesting space. His story has always been one about war, and yet he keeps getting stymied by political concerns. To him, this whole southern war is a political game compared with the real war to the north. And yet he cannot bend the knee—a purely political symbol—lest he lose the support of his main constituency.

Jon and Dany are thus becoming increasingly aligned, a trick the show is pulling by making them more and more the ones who see things in black and white, who need to make this subtle, complex political story into a simple us vs. them conflict. (‘Look where all this talking’s got us,’ one can imagine them saying to Tyrion or Varys.)

And the thing is, with an army of ice zombies on its way, there is a very real chance they are the kind of heroes we need—and this is the kind of story Game of Thrones is destined to be from here on out. 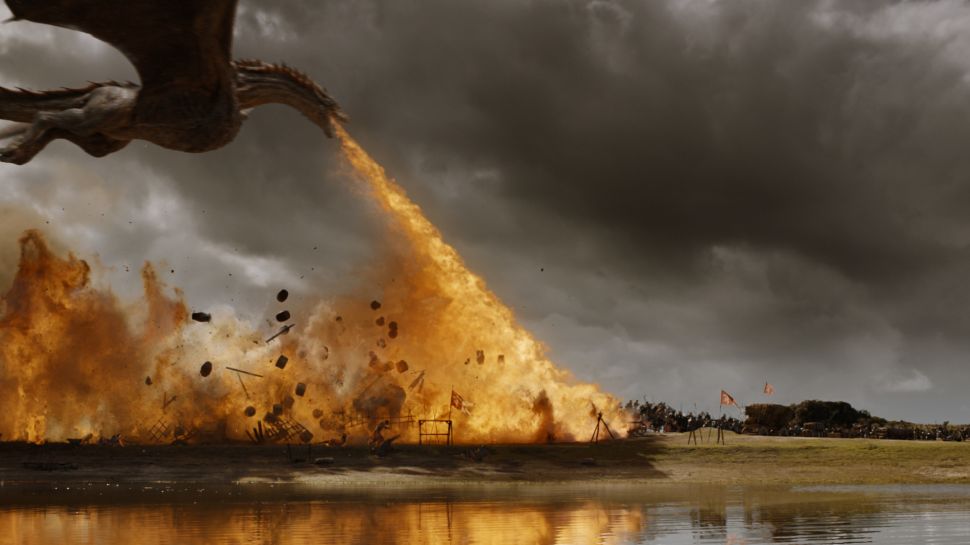