First the nightmares. There are many unpalatabilities, including ripping the nasty open-secret of a scab off broad swathes of the Republican Party’s decades-long death-dance with hate movements. In every instance, Trump is brazenly hostile toward Republican elected leaders who don’t fall slavishly in front of him or dare criticize him. To their horror, he’s breaking the very coalition that that handed him the White House and Republicans their greatest power grab in 90 years. Add to that his irresponsibility: He could easily take the U.S. to war just to look strong, thereby placing millions of lives in danger. With the exception of his hard core nativist base, he has bottomed out with most of the country, including those who held their nose, took a chance, and provided his tiny yet strategically sound margins in three states.

The daydream is singular: tax cuts.

Those two words are the sole motivating centrifugal force keeping Republicans in Washington going. They cynically think, “We will ignore the pandering to neo-Nazis, the war games, the brinkmanship, the corruption, the lies, the sleaze, the idiocy and the Russian business if we can only get those tax cuts.”

The same goes for many of the president’s advisors. Some dunces joined Trump’s administration but so did some smart people driven by the opportunity to achieve long-held goals. Case in point? Gary Cohn.

Cohn chairs the National Economic Council in Trump’s White House. He is a former Goldman Sachs executive, major Democratic donor, longtime establishment power broker, and elite Jivanka social peer whom Donald Trump found during his swamp-draining exercise. As such—and this is self-professed—tax cuts and deregulation of the financial services industry are at the top of Cohn’s agenda. It’s ostensibly the reason he joined the administration. Word has it he’s angling for chairman of the Federal Reserve.

He is also one of the most powerful, influential and prominent Jewish figures in the United States. Publicly, he appears willing to sublimate the responsibility that accompanies that position just to get tax cuts done. There’s no other explanation.

Gary Cohn stood alongside Donald Trump three days after the neo-Nazi rally in Charlottesville during the press conference in which the president claimed there were “many fine people” among the #MAGA hat wearing white supremacists, Ku Klux Klan and militia members, many of whom, it’s worth repeating, marched in the name of Donald Trump himself.

So, again, loudly for the folks in the nosebleed seats: One of the most notable Jews in the country stood alongside the president while he defended Neo-Nazis, who began their weekend of hate in Virginia chanting cruel slogans about Jews and carried signs threatening them. One of most visible jackbooted leaders, former OkCupid hopeless romantic Chris Cantwell, said on national television that his only problem with Trump is that his daughter married a Jew.

Yet, there was Gary Cohn, unflinchingly standing by the president and, given his status, giving Donald Trump cover while he gave these anti-Semitic hate groups calling for Jewish extermination the kid-glove treatment.

Whoa! Those tax cuts must be really important.

Then, The New York Times broke the story that—fasten your seat belts and hold on to your shirts—Gary Cohn considered stepping down after the president’s response to Charlottesville. He was apparently “distressed,” so distressed that he drafted his resignation letter.

But the point is he didn’t resign.

In fact, he is mind-bogglingly positioning his remaining in his job serving Trump as evidence of a Jew who “won’t be pushed around” and that somehow he is a figure of strength. That is a dizzying spin. Maybe Kellyanne Conway is giving him lessons.

Similarly, congressional Republicans have reserved their horror of a president who excuses neo-Nazis for behind closed doors—and you would think that Charlottesville would give them the cover they needed, since not standing with Nazis is a core American value or at least is a firm Raiders of the Lost Ark takeaway—and are standing by the president. Profiles in courage.

Because tax cuts. Republicans and those in pursuit of financial services deregulation know that only this partisan makeup of Washington has a prayer of delivering the mega donor class’ biggest dreams on a silver tray.

They also know that the clock is ticking. To quote the most quotable political film of all time (The American President, duh) the president’s coattails aren’t what they used to be. Worst yet, 2018 is right around the corner. Republicans in tough races will have to make a politically devastating calculus. Do they abandon a president who has lost the middle and risk a primary or a dispirited base? Or stick with a man the majority of lawmakers view as willfully incompetent and be held responsible for Donald Trump at the ballot box?

But for Gary Cohn and congressional Republicans alike, that question is totally ignored no matter what Trump foists on the country, including playing to right-wing domestic terrorists—as long as they get those tax cuts for their friends. A sick bargain indeed. 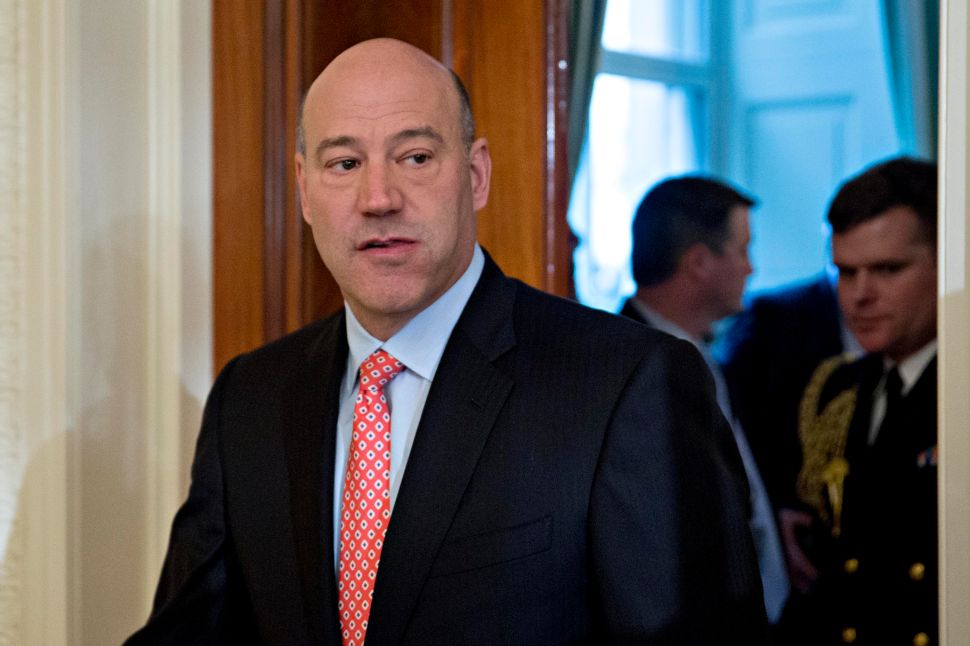