There’s a great Anne Lamott quote about writing memoir that goes, “You own everything that happened to you. Tell your stories. If people wanted you to write warmly about them, they should have behaved better.”

Both Jeannette Walls’s daddy dearest memoir The Glass Castle and Destin Daniel Cretton’s slavish adaptation could have benefited from this advice. The story’s bare bones—read the Cliff Notes—is that Manhattan writer Walls (Brie Larson) cabs home from a fancy soiree and catches her middle-aged parents dumpster diving. She doesn’t stop; even to give them the boxed leftovers to which she clings.

The memoir’s core explores how this successful striver—an upward mobility role model—arrived here given that her father Rex (Woody Harrelson) was an Appalachian drunk and her artist mother (Naomi Watts) is the ultimate enabler. Along the way, she and her two sisters and brother suffer burns, abuse, and a rootless existence shot through with the moon-dust of this magic man-child Rex.

Of course, in order for Wells to become a true adult, she has to make peace with the ways in which she’s her father’s daughter while slouching out of his toxic clutches. As Larson’s Wells says to her callow financier fiancé David (Max Greenfield), “When it comes to my family, let me do the lying.”

As memoirist knows, that goes with the territory—no matter how searingly honest the author is. At least Harrelson’s father gets to spout on the same topic, crying, in the italics of the script: “You learn from living. Everything else is a damn lie.”

The fact-based drama navigates these two poles: the lies in the words and the lies of the heart. It also, like the memoir, moves back and forth in time, from Wells’s prettified present through the hells and highlights of growing up with an abused and abusive but brilliant alcoholic father. But I could have done with a bit less of his old-fashioned survival lessons, including the scene where daughter sews papa’s torn shoulder (and we’re not talking a sleeve here). I could have used a little less of everything, in fact. Chop the 127 minute runtime and pare down the repeated examples of papa’s brutality and mama’s enabling. Director and co-writer Destin Daniel Cretton has cast the film with golden light, everywhere. It’s bouncing off the unwashed children’s ginger hair and the garbage heap by the family shack. This is the most glowing grim drama I’ve seen outside of PBS. The film enshrines the hard-knocks narrative narrative when it should be getting dirt under its fingernails—the real-life clips of the family at the end credits suggest both a more charismatic father and a dingier, duskier existence.

Harrelson as the devil-in-chief and divine daddy whipsaws between the two opposites, struggling to be good and moving and real and, well, struggling to get the kind of direction that, say, Oren Moverman gave him in the underrated Rampart and The Messenger. Larson is a good dramatic actress with a fine resting bitch face—but she’s not freed up enough from the material to reshape and liberate the narrative to give it true range and conflict. She’s a little shellacked.

The kids are universally terrific—Chandler Head and Ella Livingston as younger incarnations of Walls, as well as Sarah Snook, Sadie Sink, Josh Caras, Charlie Shotwell as the herd of Walls kids at various ages. Watts, as the mama, scrabbles to make the role hers but seems constrained by straggly hair and hippie cottons and not quite enough light in the character to counter the glow of the camera. She has a lot of scenes but not quite enough to do.

The story of an iconoclastic father and the mob he shapes for good or ill is has been told before, and I couldn’t help but think of some of them in the wake of this viewing. Last year’s deeply emotional Captain Fantastic with a thunderbolt of a performance by Viggo Mortensen and 1982’s Shoot the Moon with Albert Finney and Diane Keaton are prime examples. There are heart-tugging moments in The Glass Castle, but Walls’s bestselling memoir needed to be roughed up and aired out. For it to match up to the book, the movie needed the glass to be smashed, not every shard treasured. 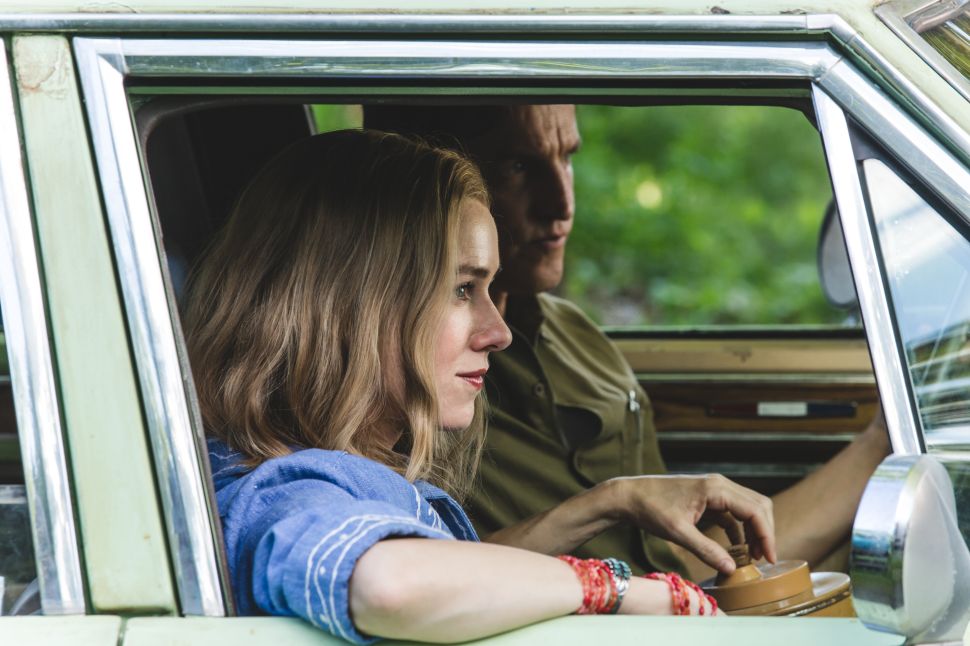