Some movies seem too long at 30 minutes. The Glass Castle, the the frantic, clumsily-paced but undeniably riveting screen adaptation of journalist Jeannette Walls’s tortured childhood memoir, clocks in at two hours and seven minutes but it’s so intense that I was hardly aware of the time. This is due largely to profound star performances by Brie Larson (in her best role since she won an Oscar for the electrifying Room), Woody Harrelson (in his best role ever), Naomi Watts and young Ella Anderson as Jeannette in adolescence—all of them as painful and true as wounds that won’t heal.

The courageous and beautifully written autobiographical details that defined the disturbing family relationships in Walls’s best seller were too numerous and complex to distill into an easily flowing screenplay, and that is the film’s major problem. The script, co-written by Andrew Lanham and the film’s director, Destin Daniel Cretton, never finds a balance between Jeannette’s formative years in the 1970s, when she was tossed around without supervision and guidance (not to mention  the benefits of an education, indoor plumbing and running ), and her life and career in the late 1980s and early 1990s. The result is a lot of  jumping around in time frames so confusing you don’t always know where you are, or why. But what a saga her life has been!

The movie begins in 1989 when, as a successful, well-paid gossip columnist for New York magazine engaged to a handsome investment banker (Max Greenfield), Jeannette spots her parents rummaging through garbage cans. Slowly we begin to see why she is so ashamed of her loopy, unconventional background that she lies about her past to everyone in New York. Over time, facts emerge in the form of flashbacks, forming the structure for a sort-of  restless trajectory. Her father, Rex Walls, was a charismatic but irresponsible non-conformist who couldn’t hold down any kind of job, eschewing normal values while he daydreamed of someday designing a futuristic “glass castle” operated by solar energy. He was a drunken motor mouth spouting a lot of nonsensical philosophy, but secretly brilliant, and so charming that people loved him in spite of his violent outbursts and unpredictable binges, which left his wife and four children dirty, hungry and alone for days at a time. (A perfect role for Woody Harrelson, who plays it like a man on the verge of a diabetic coma, desperate for a spoonful of sugar.)  Her mother, Rose Mary (the over-exposed Naomi Watts, in another of her endless screen disguises), was a  no-talent painter and aging bohemian who neglected her four children, leaving Jeannette to wash and feed herself and her three siblings while she concentrated on her paintbrushes.  As the horrors unravel, Dad forces the kids to bathe in public swimming pools to avoid the expense of paying the bill, throwing Jeannette into the deep end. In  one scene, she climbs up to the stove to light a gas jet and goes up in flames, leaving her body scarred with burns for the rest of her life. In another harrowing scene, Rex comes home after splitting his arm open  in a drunken brawl and makes Jeannette rudely stitch it up with a needle and thread. Always one step ahead of the sheriff, the Walls would drag their kids out of bed in the middle of the night and move on to another town, squatting in deserted shacks in the snow without or heat, always ending up back in Welch, West Virginia, a poverty-stricken mining town with Appalachian roots. The children were often left with their paternal  grandma, a hillbilly as crazy and cruel as her son. At one point, with the kitchen empty, Jeannette feeds her brother and two sisters with a paste made from  butter and sugar to stay alive. Learning to look at even the darkest circumstances with a positive spin, the little brother says, “It’s sort of like frosting.”

Walls always seeks the upside of down, but by the time she realizes the father she adores is a toxic influence, the viewer has already beat her to it. As they  grow older and wiser,  sifting through the detritus of a tragic upbringing, the siblings, who sort of raised each other, start saving their nickels and dimes to escape, and you can’t wait to watch them succeed. The movie is about how Jeannette came to reconcile her love for a father who could be both monstrous and caring with the need to survive—trying first to save him, and then herself. Eventually, in a death-bed scene where Dad begs for forgiveness, she realizes how empowering his influence has been and the impact his domestic dementia has made since the day she was born, and succumbs in a flood of tears.  Because the father has already been preserved in amber as a really tyrannical nut job, it’s a redemption scene that’s hard to fathom, saved only by Brie Larson’s controlled emotional strength and  Mr. Harrelson’s tender vulnerability. I’ve never been much of a fan, but he is truly overwhelming in The Glass Castle.

In a coda similar to the one in Lion, you see how all of the surviving members of the Walls family turned out at the Thanksgiving table in Jeannette’s apartment after she has chucked her fiancé and her  career as a respected journalist to write her vivid, inspired memoir. It’s here that you realize why this motley crew—the antithesis of Father Knows Best—was worth writing about in the first place. The risk Jeannette Walls takes, turning  her back on money, accomplishment, love and material success, and opting for self-respect, is exactly what her father would have wanted. The result might not be a perfect movie, but it’s a risk she can be proud of. 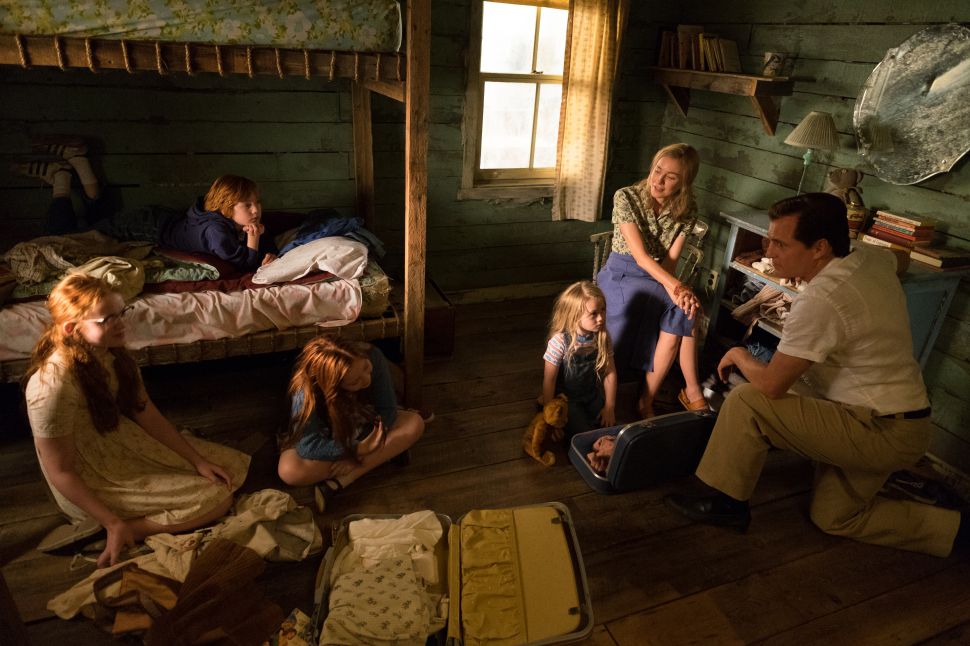