The anti-diversity memo from Google software engineer James Damore has set off shockwaves in Silicon Valley over the past week. Damore’s treatise on “Google’s Ideological Echo Chamber” accused the company of creating “a politically correct monoculture that maintains its hold by shaming dissenters into silence.” It also claimed that “men and women biologically differ in many ways” and “women generally (have) a harder time negotiating salary, asking for raises, speaking up and leading.”

Women in tech have heard all this before—as we’ve reported numerous times, females in Silicon Valley have to deal with sexism, harassment and lower pay than their male counterparts.

But this time, Google had enough—Damore was fired yesterday.

“Portions of the memo violate our Code of Conduct and cross the line by advancing harmful gender stereotypes in our workplace,” Google CEO Sundar Pichai wrote in a blog post. “Our job is to build great products for users that make a difference in their lives. To suggest a group of our colleagues have traits that make them less biologically suited to that work is offensive.”

While this move was widely cheered, many conservatives on social media felt differently—they said Google was squashing “diversity of opinion.” Julian Assange even offered Damore a job at Wikileaks.

Others tried to use the site’s search results as proof that it “hates whites,” noting that a Google image search of the phrase “white women with children” brought up images of interracial families. As such, they dubbed the search engine “Goolag.”

Not content solely to lob insults at Mountain View, however, the social media hordes then began targeting individual Google executives. The replies to Pichai’s most recent tweet, from July 28. are filled with people calling him “the authoritarian iron fist behind a rainbow glove.”

But that was mild compared to the hate lobbed at Danielle Brown, Google’s vice president of diversity, integrity and governance. Brown just started at the company in June, but she was thrust into the public eye as a result of Damore’s memo.

“Changing a culture is hard, and it’s often uncomfortable,” Brown wrote in an internal email. “But I firmly believe Google is doing the right thing.”

Some people on social media thought Brown didn’t go far enough in her comments. Any legitimate criticism was overshadowed by social media hate, however—trolls claimed Brown was “a thought police Nazi” with a “Jew nose.”

But of course, no one went further than Jack Posobiec. The alt-right activist, who gained infamy in June after he disrupted a Trump-inspired performance of Julius Caesar in Central Park, accused Brown of following only “hardcore liberals and RINOs like McCain” on Twitter (RINOs, or “Republicans in Name Only,” are people the far right considers insufficiently conservative).

Most absurdly of all, however, Posobiec said Brown showed her liberal bias by following Alt-POTUS 45, a satirical account which imagines what Hillary Clinton would tweet as president. Posobiec referred to the account as “profane…alternative facts.”

Not surprisingly Brown had enough at this point, so she set her account to “protected” mode so users had to send a request before following her. Many Twitter users (high profile and not) have this protection in place, but Posobiec still took a victory lap, believing that he was the cause.

Pichai and Brown still have not publicly responded to the trolls. 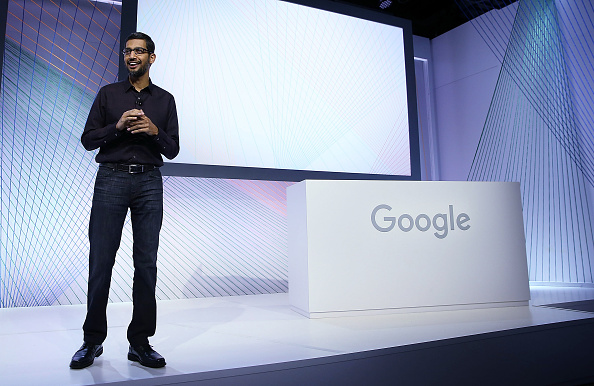