In the 1950s more Americans knew the name of Grandma Moses than that of any other artist.

Less so today. The images by her that remain, largely on greeting cards and jigsaw puzzles, do not have the same recognition they once did. But the atmosphere is the same—the hills and houses of small-town rural America in upstate New York and western New England.

Now the Bennington Museum, an institution that holds the largest public collection of works by Grandma Moses, is showing more than 60 of them. And Moses has company in the exhibition titled “Grandma Moses: American Modern”—artists like Andy Warhol, Joseph Cornell and Helen Frankenthaler join her on the walls. Let’s just say that Grandma Moses (1860-1961) didn’t always keep that kind of company. The curators are out to explore some common ground. It’s worth the trek to Bennington, a shorter journey for many than to Shelburne, Vermont, where the exhibition made its debut last summer.

And what does Anna Mary Robertson Moses share with artists who were considerably younger?  Like Warhol, who might have envied her commercial success, Moses traced images from newspaper photographs and other sources that she would include in her paintings. And many of her paintings were, in effect, collages, putting her in the company of Joseph Cornell (1903-72), who made magical stage sets in small boxes that were three-dimensional installations before that term existed. Cornell had plenty of company in the medium among surrealists.

Was Grandma Moses a surrealist? The show’s curator, Jamie Franklin, isn’t proposing that, but his pairing of Moses works with those of younger modern artists suggest a kinship that could surprise some visitors.

And there’s an underlying argument here. It comes with the reminder, if not the revelation, that Moses composed many of her scenes of rural life with the help of an archive of newspaper and magazine clippings of those images, which she often lifted from those pages and included in her paintings. If the paintings weren’t collages that involved gluing materials onto a surface, they were painted amalgams of images found in those outside sources. And, as with Frankenthaler (1928-2011), who attended Bennington College, outside sources like postcards triggered deeper memories that found their way into her work.

When a Pop artist like Warhol appropriated published images in the 1960s, he was celebrated as a rebel. So was Robert Rauschenberg, now the subject of a retrospective at the Museum of Modern Art (where Grandma Moses made her New York debut in 1939 with three paintings in an exhibition for a limited audience of invited guests).

If the elderly Moses kept boxes of images that she appropriated into her work, it was a calculation that undermined the mythology of the simple farm wife painting from the heart. Moses ceased to be the naïve painter.

And that’s the point of the exhibition. The curators argue that Moses was never a primitive—a term used to describe self-taught artists, whether they were in the cotton fields of the American South or, as Moses was, in a small town in upstate New York. Moses’s paintings, which she described as coming from memory, were supposed to be sincere, rather than calculating. Self-taught artists weren’t supposed to be so smart.

Yet Grandma Moses was both. Take her well-known painting, The Battle of Bennington (1953), which depicts soldiers fighting in the New England Hills in 1977. It also includes the obelisk memorial to the battle, which could not have been part of the landscape until after the battle was over.  In fact, the memorial was built more than a hundred years after the battle. “I guess it looked good,” Moses explained when asked about including the obelisk in the picture.

There’s a deadpan feel to Moses’s explanation of that juxtaposition that sounds downright Warholian, almost like Warhol’s response to questions about why he exhibited Brillo boxes instead of painting something original. “Because it’s easier,” he said.

The plain-spoken Moses and the ironic Warhol are on the wall next to each other in Bennington. In Moses’s 1944 painting The Old Checkered House, 1853 the oddly-patterned structure with a red and white checkerboard façade at the center looks strikingly modern next to Warhol’s Campbell’s Soup I: Chicken Noodle of 1968.

Yet the New York art world that welcomed Warhol treated Moses with condescension, partly because she was disparaged as a folk artist, partly because she was popular enough to launch a series of products, and partly because her work was warmly reassuring at a time when Abstract Expressionism was spilling testosterone onto canvases. No surprise, Moses isn’t Jackson Pollock. Yet Moses in modern company will get you thinking. 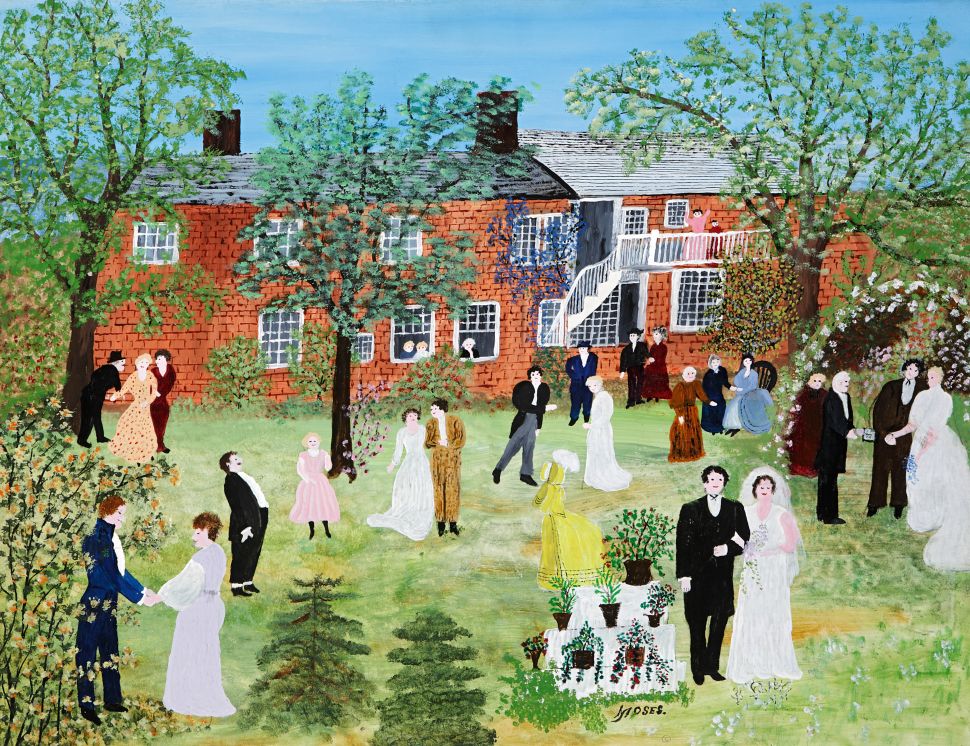