Most Americans don’t know who Horst Wessel was, but they should. One of the first Nazi Stormtroopers, he was shot in the head and killed by two communists in 1930. His death became an obsession for Hitler and the National Socialists. Nazi propaganda leader Joseph Goebbels turned him into a martyr. His death was an early warning of violence to come. Many fear similar violence in the United States after the events in Charlottesville that culminated in the murder of Heather Heyer.

On the domestic front, Heather Heyer is like John Birch. You may remember that name from pre-Fox News conspiracists. The Jon Birch Society represented the American ultra-right for decades. John Birch was a Baptist missionary and U.S. military intelligence officer killed by communists in China in 1945. Birch Society founder Robert Welch considered him the first casualty of the Cold War, symbolizing the post-World War II global conflict between communism and capitalism. The John Birch Society is still active.

Why is this relevant today? For the simple reason that, as The Wall Street Journal columnist Daniel Henninger recently wrote, Heather Heyer “won’t be the last casualty.” In a 2015 Times of Israel article, I opined that hateful rhetoric on Fox News could get out of hand and inspire repulsive people to organize, as it did in Munich in the late 1920s and 1930s. What happened in Charlottesville mirrors what happened in the streets of Germany: Politics became violent. The voting booth was not enough. The white nationalists in Charlottesville chanted “blood and soil.” So did Horst Wessel and his gang.

The eulogy that Heather’s mother gave for her daughter was deeply moving. She saw her daughter as a symbolic sacrifice in a larger struggle. Heather was no bystander. She was committed to social justice and the quest for equality—for those not represented by today’s Republican Party.

The country is now in a street fight. This is not the same as the death of, for example, Matthew Shepard, who was killed by homophobes in a cowardly lone attack. Heather’s death is the harbinger of organized street battles and planned violent events that neo-Nazis and their associated fringe groups need to gain attention.

However, this must be said: Groups like Antifa welcome an escalation. They are prepared to do battle. This has been the position of some on the far left for many years. It was on display in Seattle in 1999 when protestors violently trashed property in an anti-World Trade Organization (WTO) protest. And it was on display decades before, when the Weather Underground was active. In 1969, they launched their “days of rage,” smashing windows in downtown Chicago with the intent to topple the government by force.

Make no mistake: There is absolutely no moral equivalence between left wing groups and right wing white nationalists, the KKK, neo-Nazis and similar groups. The fact that some leftist groups at times engage in violence simply must be stated.

Now that blood has been spilled and the president has equivocated on whom to blame, emboldening the violent right wing, political instability is a possibility. Extreme right wing radio fanatics like Alex Jones (Trump is a dedicated listener) have been predicting this violence for a while. The Charlottesville chaos was fueled by the anger of people such as Jones. The clash of civilizations is here on our domestic doorstep. No ayatollahs or jihadis need apply; this is an intra-Christian conflict.

This is why the business community that flirted with Trump has fled en masse, just as German industrialists did in the 1930s. Desperate for political order, some German industrialists initially thought they could temper the National Socialists’ worst impulses. In the end, Nazis seized their companies for the war effort. Likewise, Wall Street has no use for Charlottesville’s clubs and torches. They distract from the bottom line. It is in this context that James Murdoch’s $1 million donation to the Anti-Defamation League (ADL) is akin to the Renaissance-era Borgia family buying indulgences from the Catholic Church. It’s too little too late.

Let Heather rest in peace, but it is doubtful that after sowing discord for decades the violent right with be satiated with one death. 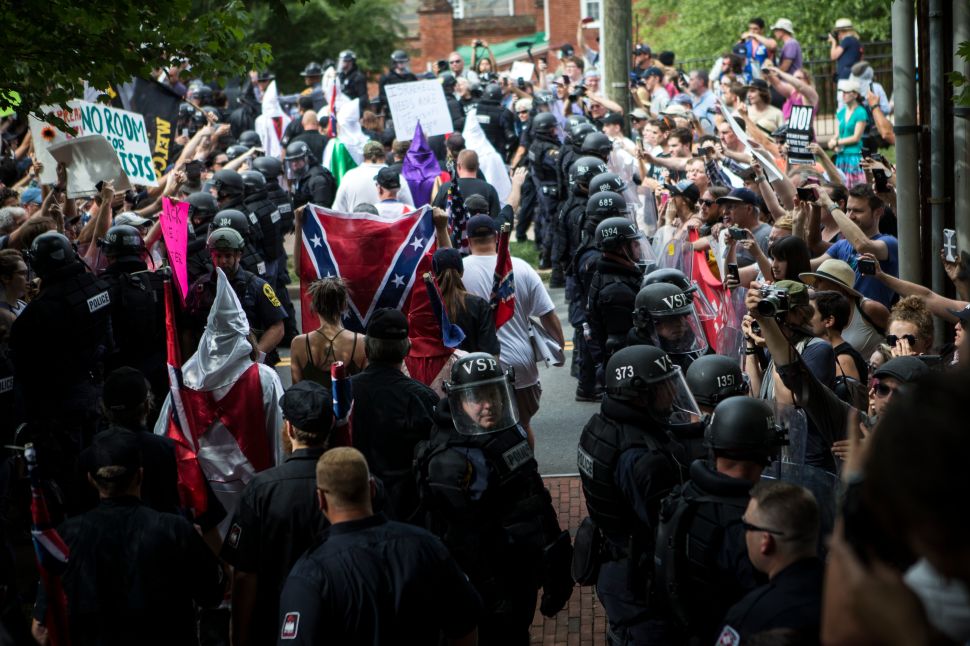