Greece has acted out a European tragedy for more than seven years. But some signs suggest Greece may finally, in the words of its economy minister, be on the way to becoming a “normal country” again.

Greece’s creditors have disbursed another chunk of funds as part of Greece’s current, €86 billion (US$100 billion) bailout, and the country recently tested the bond markets for the first time in three years, planning to borrow more from private investors soon. Some now believe Greece may soon follow fellow bailed-out countries Ireland and Portugal in their revivals.

But despite the wave of optimism, Greece’s staggering amount of debt looms menacingly over the country’s economy and future. And the International Monetary Fund (IMF), while endorsing Athens’ reform program, is urging its fellow creditors to offer Greece much greater debt relief.

In my recent book, “Tangled Governance,” I examined the financial rescue programs for euro area countries, including three for Greece, and the conflicts over them. My own research supports the view that Greece needs to finally be released from debtors’ prison but for political reasons more than the financial arithmetic at the core of the institutions’ debt analyses.

And there’s a way to do that which makes the pain bearable for everyone and opens a path back to normalcy.

Over the last seven years, we have witnessed many 11th-hour crisis meetings and last-minute rescues that, after much brinkmanship and grinding of teeth, each time seemed to narrowly avert the Greece’s ejection from the euro area.

You’d be forgiven for becoming numb to the continual travails of a modestly sized country in the southeastern corner of Europe. That would be a mistake: Greece’s tenuous position in the euro area weakens long-term confidence in European integration. Moreover, as a key NATO ally, located in a strategic corner of a volatile region, its economic and political stability are essential to European security.

To stabilize its finances and avoid expulsion from the euro area, Greece has undertaken a wrenching series of government layoffs, budget and pension cuts, and tax reforms, among other measures, at the insistence of the IMF, European Commission (EC) and European Central Bank, which together make up the so-called troika of public lenders to the beleaguered country.

So far, the troika has lent Greece about €265 billion in three separate bailouts, with the latest one set to expire next summer. Separately, Greece managed to restructure its private sector debt in 2012, reducing the amount it owed investors by about 53 percent.

Despite all this, Greece still owes a total of about €320 billion in debt, and its economy has suffered the equivalent of the Great Depression in the United States in the 1930s, having shrunk by a fourth. Unemployment is running at nearly 25 percent, and youth poverty, which soared during the crisis, remains near 36 percent.

But now that the latest disbursement of funds has been agreed to, does that mean the worst is behind Greece?

Sadly, no one should be confident that Greece’s recovery will become self-sustaining. It is particularly vulnerable to another European recession, whenever that might come. And with the end of the current bailout on the horizon, its creditors are sharply divided about what to do next.

For the moment, they’re waiting for Germany’s national elections in September to come and go so that domestic politics don’t get in the way. Debt relief before then could have been costly at the polls for the governing coalition. But once talks resume this fall, they are certain to be contentious.

The euro members, which have put up the lion’s share of the loans so far, remain deeply reluctant to offer Greece more than minimal debt relief. The IMF, on the other hand, has argued forcefully that Greece’s debt won’t become sustainable without substantial relief. It suggests doing that by keeping interest rates at today’s lows, extending grace periods and allowing Greece to defer paying back its loans until decades past the current due date of 2060.

Part of the problem is that the European creditors are holding onto a rather rosy scenario of how much Greece’s economy can be expected to grow beyond the near-term recovery and thus generate enough tax revenue to pay off its debt in the long term. The European Commission expects Greece to grow 1.5 percent every year, on average, until 2030 and 1.25 percent thereafter.

The IMF, on the other hand, projects growth of just 1 percent a year beginning in 2022.

While the difference may seem small, the cumulative effect on Greece’s ability to pay back its debt is decisive. The larger the economy, the smaller the relative size of the debt and interest payments, and the easier it will be to run budget surpluses to repay debt. If the EC is wrong, Greece will have a very hard time meeting its debt payments in two or three decades without major relief.

Ultimately, however, the ability and willingness of Greece to service its debt rests on political considerations, not economic ones, just as does the question of debt relief.

It looks like European creditors want to use the debt burden to keep Greece on a very short leash to prevent backsliding on economic reforms, albeit ones that are essential for the country to get back on its feet.

A way out of the impasse

As a long-term strategy, however, using debt as leverage over reform is doomed and will prevent Greece from a full recovery. There are two principal reasons for this:

A way out of this impasse, however, is to make the size of Greece’s debt payments contingent on growth outcomes. If Greece rebounds quickly and maintains high growth, debt relief can remain relatively modest. If Greece grows more slowly, as the IMF and others predict, then payments on the debt can be reduced and deferred automatically – without requiring creditors to come together and overcome domestic political hurdles every time.

Eurozone finance ministers recently floated this as a possibility for Greece. Given the political constraints of the key players, as my analysis of the crisis suggests, it’s the best way forward, and proponents should fight for its robust adoption so that Greece’s debt payments are significantly reduced if growth proves to be weak.

If Greece’s European creditors truly believe that their neighbor’s prospects are as rosy as they say – rather than a ploy to avoid granting relief now – then they should have little problem signing on to the new mechanism.

This will also give investors confidence that Greece in fact is returning to “normal” and they can commit to projects in the country. Finally, this will align the interests of everyone with those of the long-suffering Greek people.

C. Randall Henning is a Professor of International Economic Relations at the American University School of International Service. This article was originally published on The Conversation. Read the original article. 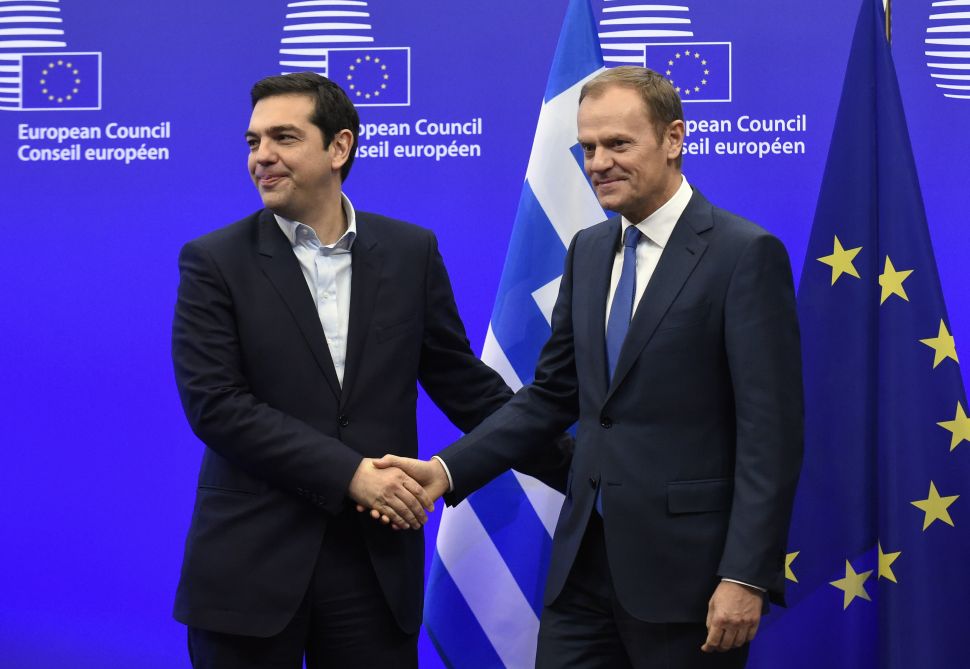