Earlier this week, Russian President Vladimir Putin played host to Israeli Prime Minister Benjamin Netanyahu in the beautiful Black Sea resort city of Sochi. This visit marked their ninth in two years, five of which have taken place in Russia.

The two leaders have a lot to talk about.

Putin’s and Netanyahu’s discussions are straightforward. To use the Hebrew vernacular, which comes from the Arabic, the discussions are very “dugri,” meaning practical and to the point. They are diplomatically convivial, but the issues at hand require gravity.

Russia and Israel need to make certain that they do not, quite literally, clip one another’s wings in Syria and Lebanon. Both countries’ air and ground forces are active in the area, and nobody wants either military to accidentally shoot at the other.

Major General Amir Eshel, the outgoing head of the Israeli air-force, announced during his exit ceremony that, of late, Israel successfully carried out over 100 strikes into Lebanon and Syria. The attacks aimed to destroy weapons being transferred into Hezbollah’s hands, which would alter the balance of power in the region. None of these strikes involved Russian troops, and there were almost no retaliatory strikes by Hezbollah.

Russia and Israel also need to work together to oust ISIS.

One of Israel’s biggest worries is Iran assuming an increasingly large role in Syria and Lebanon. In face-to-face conversations and over their secure phone lines, Netanyahu has emphasized to Putin that Israel will not tolerate a permanent residence by Iran—either by proxy or with boots on the ground—on two of their borders.

When Iranians preach about “wiping Israel off the map,” they are not merely spewing rhetoric. Teheran pursues policies and supports groups that attack Israel. Iran and her cohorts present a very real threat to Israel’s existence. It has gravitas in the region, real power, and significant and dangerous weapons. Iran can outfit Hezbollah and shoot the weapons themselves.

At a joint press conference in Sochi, Netanyahu said, “Iran is increasing its efforts to establish its military foothold in Syria. That is dangerous for Israel, the Middle East and, I believe, the whole world. Iran is already in advanced stages of taking over Iraq and Yemen, and in effect it also controls Lebanon.”

He continued, “We are all defeating ISIS in a concerted international effort, and that is welcome. What is not welcome is Iran moving in everywhere ISIS moves out. We do not forget for one minute that Iran continues to threaten Israel’s destruction every day; it is arming terrorist organizations and is instigating terrorism; and it is developing intercontinental missiles with the goal of arming them with nuclear warheads. For all these reasons, Israel continues to oppose Iran’s entrenchment in Syria.”

Netanyahu made it perfectly clear: If the stars align for Iran and they become a dominant, established presence in the region, Israel will not hesitate to strike.

Putin understands that Netanyahu is protecting Israel’s military and historical mandate—but that does not mean Putin agrees or will take up arms in Israel’s campaign to derail Iran. And unfortunately, despite a lobbying effort made last week in D.C., Israel was not able to secure an agreement from Washington that Iran won’t play a political or military role in Syria.

Israel will not be swayed and will do whatever is necessary to keep itself safe. It knows better than to rely on Russia or the U.S. At this point, it is safe to assume that if Iran remains strong in Syria and in parts of Lebanon, Israel will engage Iran directly.

But one little spark could set off a very large explosion, engulfing the entire region in flames. 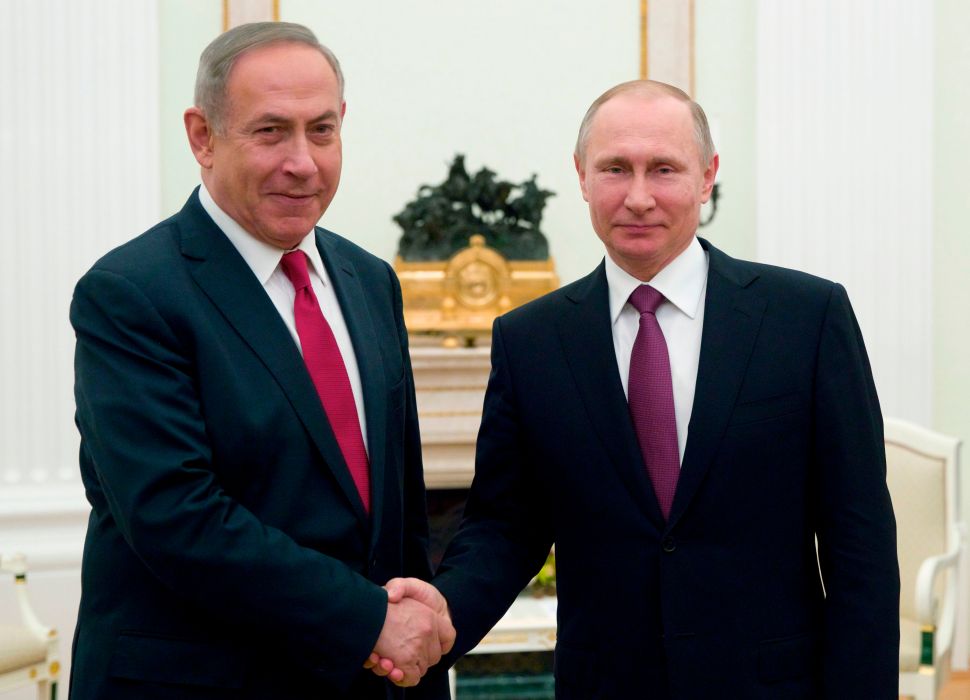