On Saturday afternoon, approximately 150 progressive activists attended the annual SlutWalk Chicago. Billed as a rally in support of women and to end “sexual violence and the social codes of shame, silence and blame,” the event seemed more like an anti-Israel rally with women’s rights serving as a mere opening act.

In June, three Jewish women were ejected from the Chicago Dyke March for carrying LGBTQ Pride flags featuring a Star of David. Organizers declared Dyke March an anti-Zionist event and removed the Jewish activists even though they did not display anything advocating for Israel. In solidarity with the Dyke March decision, SlutWalk Chicago originally banned the Star of David from their event. They later reversed that decision, stating, “Bring symbols of your respective faiths, if that is what you choose to do. Bring symbols of resistance, but leave symbols of nationalism and oppression at home.”

According to attorney Amanda Berman, Jews and supporters of Israel have found themselves unwelcome in the progressive movement.

“In the progressive Jewish community, it’s been very difficult to participate in progressive activism as a proud Jew and proud Zionist. We’ve been unwelcome for quite some time,” Berman told the Observer. “This year has been especially challenging, considering the Women’s March, support for BDS and this notion that Zionists can’t be feminists and Zionists can’t be progressive. Meanwhile, we are excluded based on our innate characteristics.”

Berman, who serves as director of legal affairs at the Lawfare Project, a pro-Israel legal group, said that the exclusion of Jews from the Chicago Dyke March for carrying a religious symbol having nothing to do with the State of Israel or Zionism, served as a “watershed moment” that has led to the creation of the Zioness initiative.

Zioness is the progressive Jewish answer to the movement’s exclusion of Jews and non-Jews who support Israel and Zionism, the right of the Jewish people to self-determination.

Under the banner “Unabashedly Progressive, Unquestionably Zionist,” more than a dozen Jewish progressives attended Saturday’s SlutWalk, despite being publicly condemned on Facebook by event organizers who made it clear that “SlutWalk Chicago does not support the ‘Zioness progressives’ coming to the walk Saturday.” In the same statement, SlutWalk Chicago reminded the public that their event will be a “march against rape culture, against victim blaming, against slut-shaming, against whorephobia, and for all survivors internationally.”

As the noon event got underway, the presence of the Zioness progressives could be felt throughout the event.

“Many of the participants who arrived at SlutWalk to talk about feminist issues and women’s empowerment were confused by the red umbrellas and the aggressive manner in which the organizers chased us around, trying to smack down and/or hide our Zioness signs,” said Berman. “When we explained our position—that we were there in solidarity with the core mission of SlutWalk and were being ostracized for our ethnoreligious identities—several of them actually took Zioness signs and stood proudly with us. They, like us, were true progressives, there to fight oppression, rape culture, slut-shaming and victim blaming, and they were not interested in playing politics with so many important issues on the line.”

Event organizers used large red umbrellas in an attempt to cover and hide the Zioness signs that featured a woman wearing a Star of David necklace. The Zioness attendees at times found themselves the target of vulgarities.

While the Zioness progressives stood firm, they and the rest of the attendees were subjected to numerous speeches that prioritized bashing Israel over condemning slut-shaming.

Gay Liberation Network co-founder Andy Thayer used his time to criticize the United States, Christians and especially the Jewish state, with the liberal use of fallacies:

“We live in a country that gives three quarters of its military aid to just two nations, the first one being Israel and the second being Egypt, and this is no accident because both of them surround Gaza,” Thayer told the crowd. “Three quarters of U.S. military aid goes to Israel, and Israel gets more than twice as much military aid as Egypt and every other country is far behind that. We have a particular responsibility in this country not only to speak against militarism in general but also the oppression of Palestinians on their own land.”

During his seven-minute falsehood-laden rant, Thayer failed to address the issues of rape culture and sexual violence that SlutWalk Chicago was founded on in 2011.

A young woman who went by the name of “Scout” spoke on behalf of the anti-Israel group Jewish Voice for Peace.

“The same motivations that bring me to SlutWalk Chicago today are the ones that bring me to the work as advocating for Palestinian human rights as a Jew and as an American,” Scout explained. “Moving positively, loudly, proudly and sexually throughout Chicago requires me to think about the way other people’s freedom of movement is restricted, both in Chicago, across the world, in Israel and in Palestine…restricted with my tax dollars and in the name of my Jewish people.”

To her credit, Scout did manage to at least mention freedom in the context of gender identity and sexuality.

The most highly anticipated speaker of the afternoon was Lela of the Palestine Youth Movement. Her remarks, taking aim at the Jewish state from its founding, display either pathetic ignorance of history, or abject mendacity:

“Before the establishment of the Zionist entity known as Israel, Zionist militia groups rumped Palestine, terrorizing the indigenous population. They employed vicious tactics from rape and sexual assault to genocide. This would later be a factor in Nakba, the mass exodus of 1948 when over 700,000 Palestinians fled their homes to escape Zionist terrorism… Since the beginning of Israel’s creation, Zionism has meant violence for Palestinian women… We’re talking about a government that…calls for the rape of Palestinian women to deter resistance. For the concerned neo-liberals who pretend to care about Palestinian women’s rights, to collapse our struggles in order to promote their own agenda, let’s make one thing clear. Our struggles are not rhetorical points, there is nothing more oppressive and harmful to the liberation of Palestinian women, Palestinian queers, than Zionism and the state of Israel. And if anyone feels uncomfortable with that, Goz, which in Arabic means, I don’t give a fuck.”

Zioness marchers did voice their disapproval of the anti-Israel and at times anti-Semitic rhetoric, calling out the lies and demanding to know what these speeches had to do with what SlutWalk Chicago stands for.

At no point did the anti-Israel speakers address the fact that due to their lifestyle they all would be subjected to imprisonment or execution under Palestinian law. In Israel, they would enjoy the same freedoms as they do in the United States.

Facts are not always politically convenient. 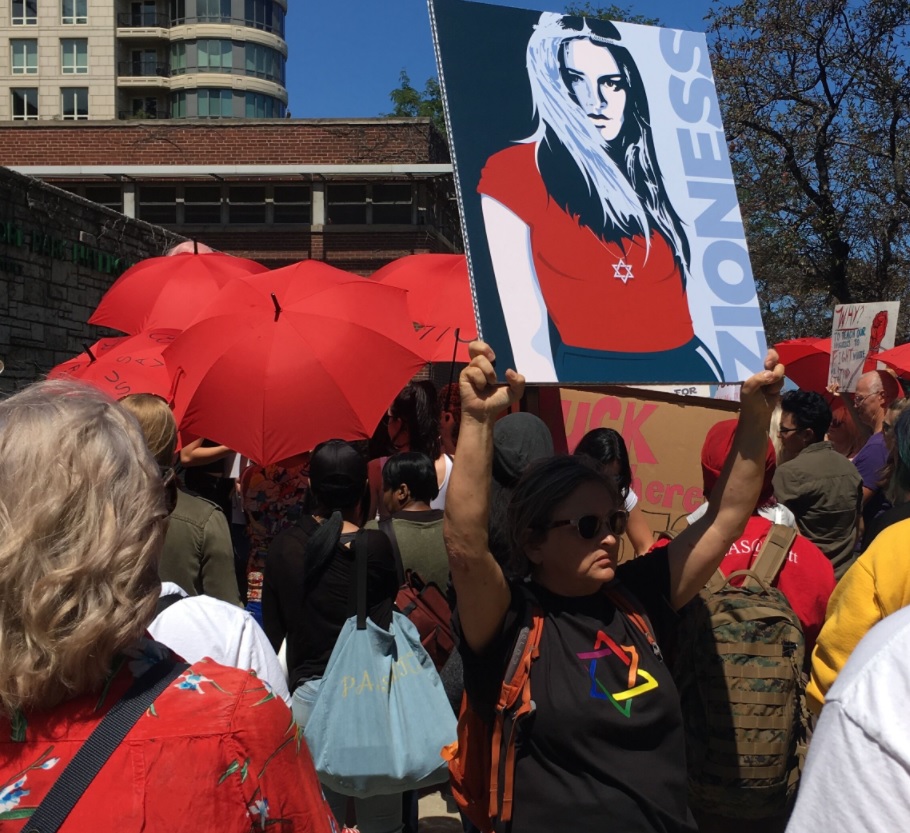