Italian American elected officials and community leaders took to the steps of City Hall on Thursday to blast City Council Speaker Melissa Mark-Viverito and Mayor Bill de Blasio for considering the removal of the Christopher Columbus statue in Columbus Circle.

Mark-Viverito, a Democrat, and Harlem elected officials held a rally earlier this week to request the removal of a statue of J. Marion Sims, a 19th Century doctor who has been called the “father of modern gynecology,” from Central Park, where it is located on East 103rd Street in East Harlem. Sims experimented on African slaves without their consent or any anesthesia throughout his career.

During the rally, the speaker said that the statue of Columbus, known for discovering the Americas while sailing for Asia, but later known for aggressive moves to colonize and oppress natives, should be also be reviewed.

In 2013, de Blasio, who is of Italian heritage, said that there are “some troubling things” in Columbus’s history.

Although a mayoral spokesman told Observer this week that the Columbus statue “will get very immediate attention because there’s been tremendous concern raised about it,” de Blasio declined to comment on any specific statue during the Democratic primary debate on Thursday night.

De Blasio has ordered a 90-day review of all statues and monuments that suggest hate, division, racism or anti-Semitism and will form a task force that will assess each one and come up with recommendations.

Councilman Joe Borelli, who penned a letter to de Blasio and Mark-Viverito asking them to outline the criteria that a de Blasio-appointed commission will use to decide which monuments stay and which of them go, said that the issue “has attracted more attention outside of New York City than one would anticipate.”

“The point of mentioning this is to reaffirm how deep the roots are for Italian Americans to the legacy of Christopher Columbus,” Borelli said. “Many of the organizations standing behind me bear the name of Columbus or of Columbia and they’re proud to do so. Many of them do not but they still share in the interest in preserving the legacy of who Christopher Columbus was, faults and all, for the memory and legacy of New York’s residents.”

Borelli, a co-chair of President Trump’s New York campaign, suggested that de Blasio and Mark-Viverito were proving Trump right. After a deadly neo-Nazi rally in Charlottesville, Va., this month, the president stirred controversy with his comments that people who want to remove confederate statues and monuments would be erasing parts of U.S. history. The neo-Nazi rally in Virginia began as a protest of Charlottesville’s decision to remove a statue of confederate general Robert E. Lee.

Ulrich said that de Blasio has “shamefully sidestepped this issue.”

In the wake of the Charlottesville rally, many other cities and states have moved to take down statues of confederate generals or other divisive symbols.

The effort to remove a statue of Columbus, one of the most famous explorers in history, celebrated with national holidays in many countries, has brought a new twist to the discussion.

Trump supporters were also seen in the background at Thursday’s rally. Speakers frequently blasted what they described as “revisionist history,” and Castorina and Gentile said Columbus discovered America despite the fact that he did not reach North America, only landing on the Carribbean islands and Central and South American coasts. Gentile also claimed that Native Americans were not welcoming to Columbus.

Mark-Viverito has told reporters that the commission would evaluate all monuments and statues and that her focus is on getting the Sims statue removed.

“I expect — as all other monuments and statues on city-owned land that the figure of Columbus as well as every other figure that is in a monument or in a statue on any sort of city property on the city of New York — will be evaluated by the commission that will be convened by the mayor,” she said. “But I would hope that in times of, on this conversation of the climate that we find ourselves in, we have to gain a deeper understanding of each other and be willing to listen to our experiences.” 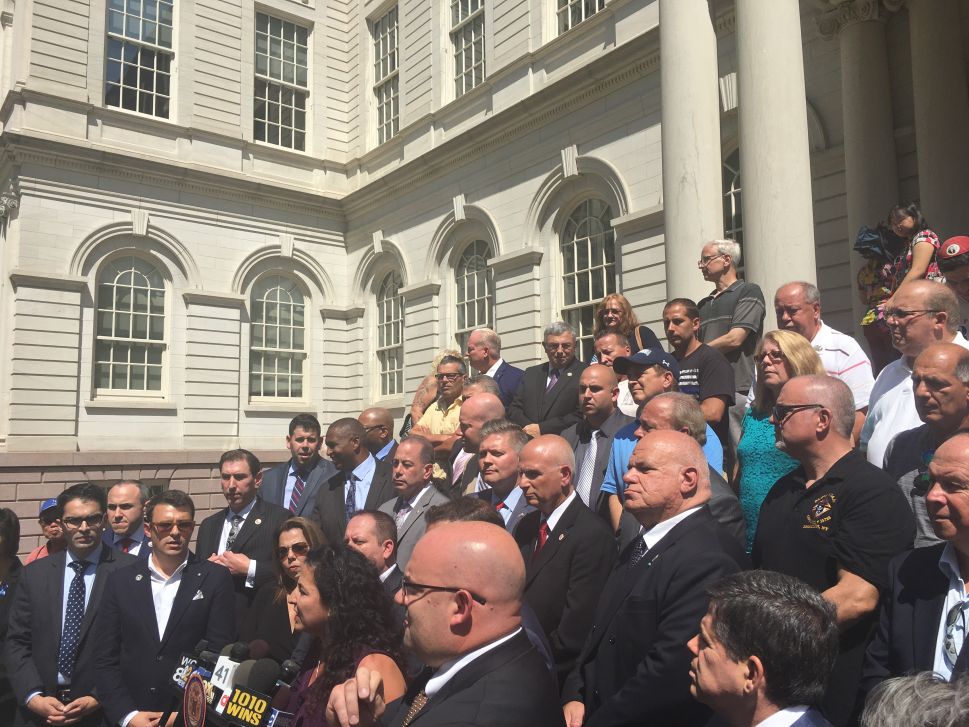