Soberly and sincerely narrated with more than the usual professional polish by Colin Farrell, It’s Not Yet Dark is an inspirational documentary about Simon Fitzmaurice, a handsome and talented young Irish filmmaker with M.N.D. (Motor Neuron Disease, also called Lou Gehrig’s disease), a neurological disorder that causes increasing muscle weakness, eventual paralysis, and almost certain death. In most cases it is tragic and hopeless. But as the indestructible Fitzmaurice says in his first-person written narration, “I am unable to speak, swallow or even breathe without artificial help. But I can still feel…everything!”

Directed by Frankie Fenton, this remarkable portrait in courage follows its young hero as he embarks on the mind-blowing challenge of directing his first feature-length motion picture, titled My Name is Emily. Fitzmaurice uses a complex technology that enables a disabled person to construct thoughts into words on a computer, simply by gazing at a keyboard with the eyes. The documentary recalls the narrativized version of Stephen Hawking’s life seen in one of this decade’s greatest film triumphs The Theory of Everything. But in some ways, this film is even more moving than that 2014 drama. Fitzmaurice has such a passion for movies that he filmed every chapter in his brave journey as it actually happened. We are watching the real deal—not a re-enactment with actors simulating life, but life itself.

Clever, funny and sensitive, even as a boy, Simon fell in love with movies the day he saw The Godfather. There were girls, but his life changed the day he met Ruth, a fellow university student in Dublin, who became his devoted wife, nurse and lifelong support system. She plays a major role in the film, as she helps guide and shape the narrative in the same way she aided Simon when he wrote the best-selling memoir on which the film is based. Just when his career was beginning to move, his body stopped. On a snowy street in Park City, Utah—where one of his short films had just been screened at Sundance—he was walking through the icy drifts, elated by the ovation he had received, when he felt his foot go numb and he began to limp. Back home in Ireland, he got the bad news: three to four years to live. Despair and terror were unavoidable, and there were days spent in tidal-waves of tears. But as he collates the experience, the narrative takes on a life of its own. He and his family explored every alternative—prayers, home remedies, mystic and religious theories, and the strength of Superman munching on Kryptonite. Simon simply refused to give in, or give up. And he got it all down on celluloid, recording every detour as he learned to cope with the inevitable. During the years that followed, his body surrendered, but his spirit fought on.  He refused to be defined by his illness. Defying the odds, he fathered five children and learned how to write with his mystifying new toy—a miracle computer operated solely by the pupils in his eyes. In 2008, at the age of 34, he had been handed a fatal diagnosis and he proved the titans of medicine and science wrong by writing and directing his first major film. He is not through yet. “There is no surviving,” he says. “Only living or dying. I have decided to live.”

In the end, when, after all he’s been through, his computer announces to his cast and crew, “That’s a wrap!”  I defy anyone not to cheer. 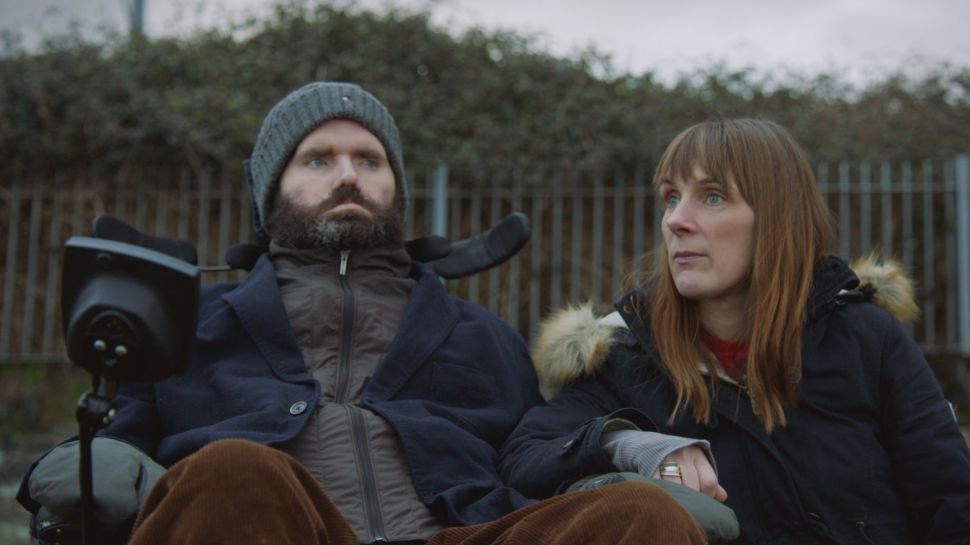