Sen. Jeff Flake says Republicans are in denial about Trump, but I think my party may be in denial about Never Trump Republicans who don’t fight to cut spending and constrict the size of the federal government. I like Flake but have found him to be a big disappointment. When he came from the House to the Senate, he had a reputation as a libertarian in the mold of Sen. Rand Paul, but he turned out to be a moderate like Sen. John McCain. President Donald J. Trump is not the problem. Guys like Jeff Flake are the problem. They haven’t dug in and fought for conservative principles.

Flake has been making the rounds to pitch his new book Conscience of a Conservative. An excerpt of the book was published in Politico on July 31, 2017 and titled “My Party Is in Denial About Donald Trump. We created him, and now we’re rationalizing him. When will it stop?”

First and foremost, it’s important to note that Flake was tested as a man during the shooting of Rep. Steve Scalise on June 14, 2017. According to the Washington Post, Flake ran to apply pressure on Scalise’s wound the moment somebody said the shooter was down. By all accounts, Flake was running from victim to victim to help. For that, he should be considered a real hero and somebody who showed bravery under dangerous circumstances.

Although Flake seems like a classy guy and somebody who is willing to put himself in harm’s way to help his fellow man, he has been less than brave in the Senate. Many conservative groups have compiled voting records that show Flake is more of a moderate than a conservative.

According to Heritage Action for America’s record, Flake took the following bad votes: Cures Act (a bloated spending bill), Lame Duck Continuing Resolution for FY 2017, Puerto Rico Bailout Bill, a bill that included women in the draft, Murkowski-Cantwell “Energy Bill” that was loaded with crony capitalism, Highway Bailout Bill, and a $500 billion bill to repeal Medicare’s Sustainable Growth Rate (SGR). These are bad votes, but his most egregious was his vote in favor of the motion to proceed to debate the Manchin-Toomey gun control bill on April 11, 2013. Sen. Rand Paul had sent a letter to leadership with Sens. Mike Lee and Ted Cruz promising to filibuster the motion to proceed because the bill was an infringement on the Bill of Rights. Flake refused to sign the letter and voted to start debate. For Flake’s bad votes on spending issues and his vote to debate a bill that infringes on gun rights, Flake really can’t be considered one of the solid conservatives in the Senate.

Flake’s book makes the case for Never Trump Republicans to continue the fight against Trump. In the excerpt in Politico, Flake quotes Michael Gerson, one of the squishes who lead President George W. Bush astray of small government conservatism. Gerson says, “The conservative mind, in some very visible cases, has become diseased,” and conservative institutions “with the blessings of a president … have abandoned the normal constraints of reason and compassion.” Gerson’s idea of “compassion” are expensive ideas like No Child Left Behind (NCLB), Medicare Part D and failed nation building exercises in Iraq and Afghanistan. Gerson hates libertarians like Rand Paul, and real conservatives like Ted Cruz, but Flake quotes Gerson, an advocate of bigger government, as a source for his arguments against Trump.

If you quote Michael Gerson, you are a “squish” when it comes to Paul-Cruz style conservatism.

Flake goes further down the wrong track when he argues:

There was a time when the leadership of the Congress from both parties felt an institutional loyalty that would frequently create bonds across party lines in defense of congressional prerogatives in a unified front against the White House, regardless of the president’s party. We do not have to go very far back to identify these exemplars—the Bob Doles and Howard Bakers and Richard Lugars of the Senate. Vigorous partisans, yes, but even more important, principled constitutional conservatives whose primary interest was in governing and making America truly great.

Flake doesn’t mention conservative heroes like Sens. Jesse Helms, Rep. Ron Paul  and Sen. Jim DeMint. When Bob Dole ran for president, I voted libertarian. Howard Baker was a nice man, but he wasn’t a tough leader. Richard Lugar was terrible on gun issues. Citing squishy Bob Dole and Dick Lugar as a model of bipartisan leadership reveals how Flake views his role as senator. A true conservative would say the role of a senator is to use his power to fight against the swamp of both parties and restore power to the states and the people.

I agree with Flake that senators have to stand up for the Article I constitutional powers and flex some institutional muscle, so let’s see if he is willing to shut down the government and use the power of the purse to fight to shrink government or to restore a constitutional balance between the branches.

I would support Flake if he stood up to Trump to keep the legislative filibuster in place so senators can have the power to extend debate if they would like. Eliminating the filibuster would cede more power to the executive branch. Will Flake fight to end Sec. 702 of the Foreign Intelligence Surveillance Act that infringes on the 4th Amendment rights of all Americans? Let’s see. Can Flake fight the Justice Department when it attacks states that have legalized medical marijuana in its effort to restart the war on drugs? That would show a “conscience.” When the rubber meets the road, let’s see if Flake will dig in and fight for conservative principles.

My fear is that many Republicans are angry with President Donald Trump’s Twitter feed and his tone alone. I have no problem with the president not being politically correct if he implements tax cuts and chips away at Obamacare. Policy is more important than the idea of “bipartisanship” and being accepted by the D.C. cocktail circuit for criticizing Trump’s tone.

Flake seems like a good man, but his politics are misguided if he falls into the trap that he must work across party lines. Instead, he should be fighting both parties’ leadership to stop cronyism and shrink the power of Washington, D.C.

Brian Darling is former Sr. Communications Director and Counsel for Sen. Rand Paul (R-Ky.).  He can be followed on Twitter @BrianHDarling 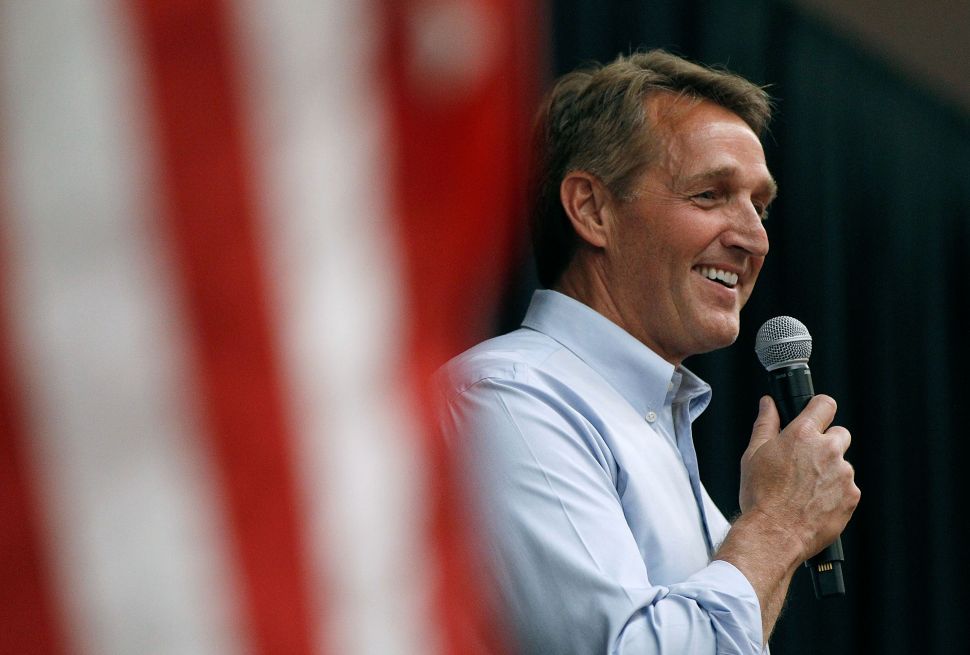