Perhaps Donald Trump’s plan all along was to appease what New Yorkers like him call the “flyover” states where NASCAR roars on circular tracks and Texans get baptized in a creek. Priebus might have guessed early on that the country people—like Priebus of Wisconsin, Steve Bannon of Virginia, and Jeff Sessions of Alabama—would soon be kicked out and replaced by Trump’s urban cronies with Jersey Shore nicknames like “The Mooch.” Bannon would never get a cool nickname like that. Then The Mooch was suddenly out the door.

The big question is not so much if new Chief of Staff General John Kelly can manage the motley crew that shuffles back and forth through the Oval Office. Certainly he can—even if it means firing them all and starting again from scratch. But Kelly is quintessentially warrior establishment. He is a friend, confidant and colleague to folk like former FBI Director James Comey, who Trump referred to as a “nut job.” And we know how that turned out.

This is the question: Has Trump put himself in a straight jacket? John R. O’Donnell, who co-authored a biography of Trump, wrote that his “attention span was so small it was almost impossible to have a strategic conversation with him.”

Will Trump be bored with a distinguished military man running his show? Can Kelly bear the constant distraction of a man who can’t stay focused?

After all, Kelly is Trump’s worst nightmare. He is the Anti-Trump.

Anyway, it’s too late now. The chaos of last week will culminate in a new beginning, the real story that will speak to the ages—a story that may include Trump, but only as a prelude.

As has by now been well observed, the “Trump phenomenon” all apparently swirled unintended out of the mind of two wise and intuitive writers, William Strauss and Neil Howe, who dug deep into Roman history to rediscover the saeculum, which follows the observation that history’s ages shift every 70 years or so. We are at such a turning today.

Trump’s problem is that he turned to Bannon for interpretation of the Strauss/Howe generational theory.

And Bannon saw Trump as the agent of this turning. That is, he believed that Strauss’s and Howe’s book, The Fourth Turning: An American Prophecy—What the Cycles of History Tell Us About America’s Next Rendezvous with Destiny, was a talisman in his hands and that he, Bannon, could personally conjure this destiny.

The book became famous when people learned it was Bannon’s favorite book.

But history doesn’t work that way. Cyclical theories like Thomas Kuhn’s theory of scientific cycles, Mircea Eliade’s profound text on “Eternal Return,” and other studies of historic destiny suggest that these turnings occur unintentionally. They only work when nobody is watching. You can’t make them happen and trying to do so will only cause chaos.

Regardless, as its fans know well, the real Fourth Turning story begins with the Gray Champion.

“Each time the Grey Champion appeared marked the arrival of a moment of ‘darkness, and adversity, and peril,’ the climax of the Fourth Turning,” wrote the authors.

The Gray Champion was an aged veteran of a long past war, drawn from a Nathaniel Hawthorne novel, who appeared as chaos rose and threatened to engulf the republic. When the Gray Champion appeared and spoke to them, the people found their purpose and the will to pursue it. They could no longer be bullied. They knew then what they had to do.

Sen. John McCain is the Gray Champion. Just days out of surgery, he cast his vote on the “skinny repeal” of the health care bill and brought the end of seven years of political disorder.

It is entirely appropriate that McCain, flanked on either side by Maine Sen. Susan Collins and Alaska Sen. Lisa Murkowski, takes this historic mantle. It was him that got the ball rolling for the Trump crew in the first place when candidate Trump mocked McCain’s war service saying,”He is not a war hero.” McCain, a Navy pilot who was shot down over Hanoi, spent years as a POW in Vietnam.

“The attack on McCain was iconoclastic, like a Maoist revolutionary intentionally destroying a priceless Ming Dynasty vase to mark the transition in history,” I wrote for The Hill in July 2015. “Trump repudiated the most treasured symbol of the old regime, its most venerable warrior.”

The Fourth Turning has been portrayed as an end game, a fin de siecle vision of historical destruction. But it is really the story of birth pains and new beginnings, a new creation whose spirit will run the coming century.

Always loyal and by McCain’s side, South Carolina Sen. Lindsay Graham said there will be “holy hell to pay” if Attorney General Jeff Sessions is fired. And, he told reporters, “Any effort to go after Mueller could be the beginning of the end of the Trump presidency unless Mueller did something wrong.”

We better listen to Graham. This is where our story and Strauss’ and Howe’s “rendezvous with destiny” could well begin. 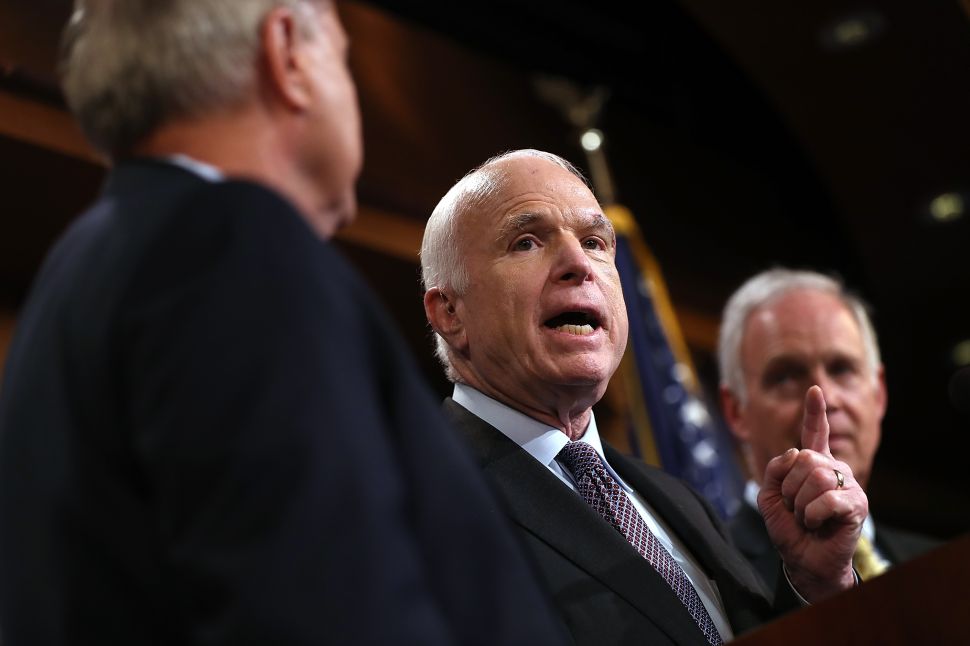