The universe that’s home to Iron Man, Thor and the Black Widow has sure been riddled with daddy issues.

Robert Downey, Jr.’s Tony Stark just can’t get over his dad’s disappointments. Tom Hiddleston’s Loki can’t let go of playing second fiddle to his adopted brother, Chris Hemsworth’s Thor. There is even a robot with daddy issues at the core of Avengers 2. As if we haven’t gotten enough of daddy issues from the Star Wars franchise.

With Marvel’s The Defenders, at least the old script flips a little bit. This time, we get supervillains with mommy problems. In my day, supervillains just wanted to rob all the gold from Fort Knox and buy a nice island nation to retire in, but I’m willing to play along here. We need some kind of interesting motivation in these stories, and they get even better when characters have multiple, conflicting motivations that force difficult choices.

It’s tougher to pull off those conflicts with superheroes, which are fundamentally conservative characters. Heroes just want everything to stay the same. They want everyone to keep their stuff, stay alive and for tomorrow to look much like today did. The big choice they have to make is whether to stay safe with the people from their real lives or keep other people safe in their masked life.

The villains, though, they are always out to make a big move, and that force bigger choices for themselves and their enemies. Maybe not everyone agrees with the idea of putting giant murder machines in the sky to systematically pick off every person around the globe profiled as likely to destabilize society (that’s the plot of Captain America: Winter Soldier), but you have to admit: it’s a bold vision.

Throw mommy issues into the mix and you’ll see the season’s big bad reaching for her bottle of Xanax as quickly as Jessica Jones (Krysten Ritter) kicks back her fifth of Jack Daniels.

There have been five seasons of Marvel comics superheroes on Netflix so far, and they’ve all done a good job of manufacturing villains who shake up the heroes’ lives in ways that reveal something about the good guy and the bad. In every case, it has been almost more important to understand the villains than it has been to understand the heroes. This has been true since Marvel’s Daredevil, a show that’s really two origin stories in one.

Daredevil seems like its just about Matt Murdock finding himself in his red cowl while fighting a crime lord. Instead, by the end, you realize that it was just as much about Wilson Fix (Vincent D’Onofrio) becoming the Kingpin. Similarly, Marvel’s The Defenders is also two stories in one, each about the two different teams confronting each other.

In our prior post, we didn’t mention the fact that the super assassin Elektra returns and plays a key role in the series. Viewers first encountered her in the second season of Daredevil. She’s Matt’s old girlfriend and one of the others his mentor trained to fight alongside him against The Hand.

In this show, though, she’s also the surrogate daughter of Alexandra (Sigourney Weaver), the true leader of The Hand. The organization has been teased out throughout the Netflix shows, but it’s only in this one that we learn it has five distinct branches, all of which trace back to a group of devotees trained in the same magic city where Iron Fist learned Kung Fu.

Alexandra leads these factions, but it’s her sole choice to give birth to Elektra by using the very last of The Hand’s creepy resurrection fluid to bring the jetsetting karate whiz back to life after she was killed at the end of the second Daredevil series. Once that’s done, Alexandra seems to have a hard time choosing between her commitment to this surrogate daughter and whatever evil scheme she and her four ancient allies have hatched.

That plan is best illuminated by Marvel’s Iron Fist, a regrettable show, but essential viewing for really understanding The Defenders. Elektra has echoes in both of its main characters. Like Colleen Wing (Jessica Henwick), she’s found herself in an adopted family whose leader her heart belongs to but her mind doesn’t trust. Like Danny Rand (Finn Jones), the Iron Fist (Finn Jones), she’s the promised savior of an ancient organization who she ultimately lets down.

All three of them are stuck facing up to their own inadequacy before a destiny that none of them chose.

Meanwhile, Alexandra’s destiny is to lead The Hand triumphantly back to the mystical city of K’un-L’un, the place that brought them together and also gave Danny his fancy glowing fist power. Just on the precipice fulfilling that destiny might have been the wrong time to resurrect a dead ninja for an adopted daughter.

That rebellious stage can get messy in a secret lair with lots of blades around. 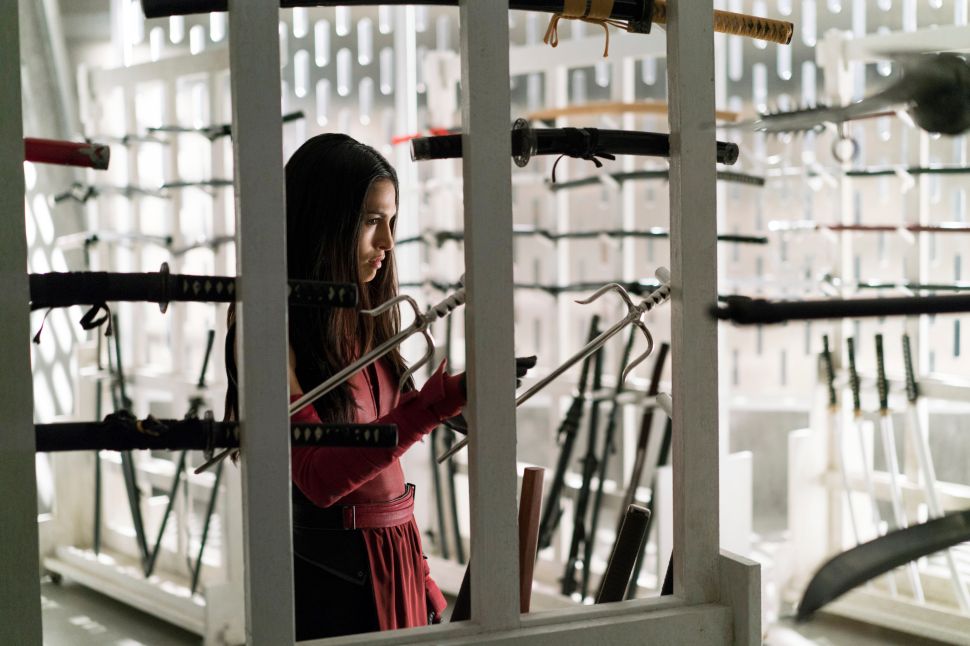