When rain is in the forecast—or the clouds are ominously grey—snakeskin stilettos are hardly the first go-to option. So when First Lady Melania Trump was photographed en route to Air Force One to visit the horrific victims of Hurricane Harvey in Texas while wearing a towering pair of black pumps, there was quite a bit of criticism. The impractical shoes seemed tone deaf and highly inappropriate for a visit to one of the worst natural disasters our country has ever seen. One could hardly navigate a puddle in those, let alone the 50 inches of flooding some areas in Texas are now facing.

There was so much noise around her footwear choice that a spokesperson for the First Lady released a statement, promising citizens of the United States that Melania had another pair of shoes on the plane. She would, rest assured, be changing into her more practical shoes upon arrival in Corpus Christi.

The rest of FLOTUS’ outfit was ready for action, including the aviation-themed pieces such as an olive green bomber jacket and oversized aviators, plus a sensible black shirt and cropped pants. But it was simply the message she conveyed with her superfluous stilettos that led to the controversy.

And here we have Melania Trump modeling what NOT to wear to a hurricane: 5-inch stilettos.

How out of touch can you be? pic.twitter.com/tZR8o3dYxY

Not sure Melania Trump is prepared for Hurricane Harvey pic.twitter.com/Mz5ndbmKC9

I fear Melania Trump’s four-inch heels may not last the day. pic.twitter.com/cEngzLn3ck

In response to those Tweets, the First Lady’s communications director had a cutting remark.

from @FLOTUS comms dir: "It's sad that we have an active and ongoing natural disaster in Texas, and people are worried about her shoes."

Citizens of Houston and the surrounding areas are not only fighting for their own survival, including that of their loved ones and pets, but many of them have lost all of their worldly possessions, including their houses. Now is a time to give back to the communities that have been hit the hardest and put your own luxuries aside, with a sacrifice of any size—be that a monetary donation to the Red Cross or hours of volunteer work. It’s not the time to flaunt sartorial finesse or designer products. 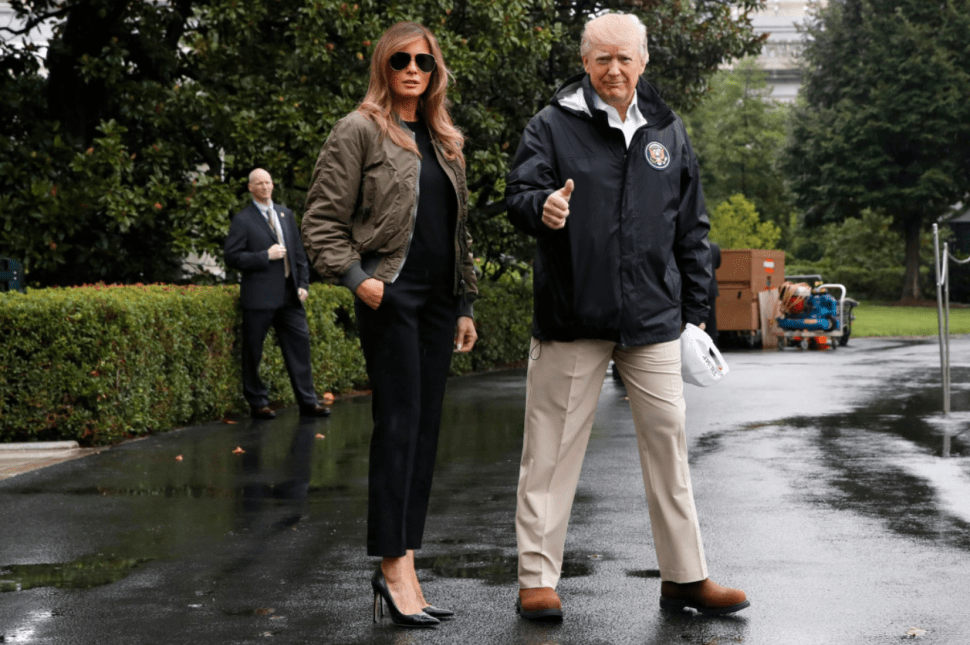