Scott Joplin’s piano-tickling ragtime makes a perfect intro for any play set in a New York City parlor of 1901, but at the first of eight previews for If Only… at the Cherry Lane, he overstayed his welcome by a good ten minutes. It probably seemed longer if you were—as lead Melissa Gilbert was—trying to make yourself heard over the jaunty music, reading a serious, mood-setting journal entry about your first brush with pre-Presidential Abe Lincoln.

But when you’ve been in showbiz a half-century, as Gilbert has, you’ve doubtlessly developed certain survival skills that enable you to plow through annoying little technical glitches like that with professional pluck, grace and aplomb. It was a spectacle future audiences will probably be spared.

“Yep, that’s my job,” beams Gilbert, taking a bow after her true-grit triumph-of-the-will Saturday night. “If there’s a problem, either I fix it or I ram through it until it’s fixed. That one I couldn’t fix because it wasn’t up to me to fix the sound cues.”

Thomas Klingenstein’s new play, which has its world premiere August 28 with a Sunday afternoon matinee, presents a Melissa Gilbert you’ve not seen before. These days she’s a long way from Laura Ingalls Wilder, the little Minnesota farm girl who grew up in your living room on NBC’s Little House on the Prairie from 1974 to 1984. Now, when she reads journal entries, those “granny glasses” perched precariously on the tip of her nose are actually her own.

“Those are my prescription granny glasses,” she declares, a tad gladly. “I have trifocals, I have granny eyes—and I am a grandmother” (courtesy of her second son, Michael Boxleitner, who was named after her Prairie father, Michael Landon).

None of this news sits agreeably with her fans who use her, like Shirley Temple and other child stars, as a human sun-dial for the passage of time. “When I tell people my age, there’s always an audible ‘Oh, my God!’—especially from the women, who are the same age and don’t want to be reminded of it. But it sure beats the alternative.”

This is what comes of starting early. During her decade as a Prairie pioneer, she starred in 190 of the series’ 204 episodes. When she first signed up, she was only nine and already an established professional actor.

“I started doing commercials when I was two and episodic television when I was around four,” Gilbert ticks off. “My first job was an episode on Gunsmoke.”

She only marries actors who co-star with her, but so far she’s not got beyond the B’s: Bo Brinkman (1988-92), Bruce Boxleitner (1995-2011) and a redheaded, Emmy-winning Thirtysomething, Timothy Busfield (2013-present). At least she seems to have broken the alliteration curse (Timothy has a brother named Buck Busfield).

“We work together as much as possible, and we really love it,” says Gilbert of the relationship with her spouse. “We are constantly creating.” A 44-minute short they shot in North Carolina, One Smart Fellow, picked up a prize at the Traverse City Film Festival in 2016. Last year they filmed a TV pilot and formed a production company for film and television in Michigan with fellow actor, Jeff Daniels. Gilbert and Busfield were in New York on a semi-vacation, meeting with agents about some projects they’d put together when If Only . . . was waved in front of her as a possibility.

“My agent told me this play was happening and asked if I’d audition. We had just had this conversation about reinventing myself and taking chances. At this age for me now, I am no longer—definitely—an ingenue. I just happened to be in town when this project came up, so he brought me the script that night. I had about two hours to work on about 14 pages. Then I went in the next morning and auditioned for Christopher McElroen, the director.”

If Only . . . exudes a certain pressed-rose, other-world ambience. Gently, it evolves into an interracial romance prompted by Lincoln and played politely at arm’s length. The Great Emancipator also turns out to have been a pretty good matchmaker, bringing together a well-educated ex-slave (Mark Kenneth Smaltz) and the married New York social lady who nursed him during the war (Gilbert). Not only is it unconsummated, 36 years pass before they get together again and verbalize what might have been. Think of it as Far From Heaven in starchy high-collar.

“I loved the fact that it was an opportunity to tell the story of two people who were soul mates and forced not to be together simply because of the color of their skin,” says Gilbert. “I find it so infuriating that this is even an issue anymore, anywhere in the world—but especially here in America. That was, initially, what drew me to it.”

There was one other consideration as well: “It is very rare for me to just be able to play a love story at my age. You know, people this age go through these things all the time. Just because you get older doesn’t mean that you stop having feelings.”

The last—and only other—time that Gilbert ever appeared on a New York stage was 30 years ago when she was 23 and co-starring with Gordana Rashovich at the Westside Arts in A Shayna Maidel, Barbara Lebow’s much-admired drama about the reunion of two sisters who were brought up on two different World War II fronts. “Well,” the actress cracks glibly, “you know me and my lighthearted comedies.”

Gilbert’s one shot at Broadway came in 2010, playing the mother part in a musicalized Little House on the Prairie. In the first workshop, Patrick Swayze had the Landon role but became ill and had to relinquish it to Steve Blanchard.

“We did it at the Guthrie for three months one summer, then the following year we came here, did more workshops and presented it at the Paper Mill Playhouse before taking it on the road for a year. The tour was exhausting, plus I had injured myself badly at the Paper Mill before we left and didn’t realize at the time the extent of it.”

At tour’s end in Kansas City, Mo., she learned she had been working with a broken back. “I don’t know how I did it. It was kind of a miracle, I guess.” She underwent surgery to replace a disc as well as fuse a vertebra in her lower spine. “It was a long, slow recovery, with nurses at home and a walker, but I did recover. I seem to have some sort of major spine surgery every few years. My spine is my Achilles’ heel.”

It flared up again last year and forced her to withdraw as the presumptive Democratic nominee for Michigan’s 8th congressional district where she and her husband live. Her previous taste of politics was in serving two terms (four years) as President of the Screen Actors Guild. “Union politics is just so difficult. I’ve done my time.”

Gilbert and the late Patty Duke were lifelong friends. “We lived very parallel lives. We had grown up as child actors. We both played Helen Keller. [Gilbert was an Emmy-nominated one to Duke’s Emmy-winning Anne Sullivan in 1979.] We both became SAG presidents. And we were very, very close personally. Always.”

In her long career, Gilbert seems to have been one of everything. She does summer stock (her last was Steel Magnolias at the Totem Pole Playhouse in Pennsylvania). Her Little House work got her into the Western Performers Hall of Fame at the National Cowboy & Western Heritage Museum in Oklahoma City. She wrote a short story for children called Daisy and Josephine. She does voiceovers (like, Batgirl in the 1990s Batman: The Animated Series). She dated Rob Lowe. She has danced with the stars. (Partnered by Maksim Chmerkovskiy, the experience was, she says, “not easy. It was an eye-opening, spray-can, glittery experience. I’m glad I did it, but I will never do anything like that again. It was an excruciating amount of work.”) She has battled alcoholism and drug abuse and lived to write about it in a 2009 autobiography. She cooks, and wrote about that in My Prairie Cookbook: Memories and Frontier Food from My Little House to Yours.

“I’m blessed to have a very varied career of different genres and different styles,” she admits. “It’s been fun, and it just gets more interesting as I age, which is a blessing. I would be thrilled to do more theater in New York. I’m having a blast.” 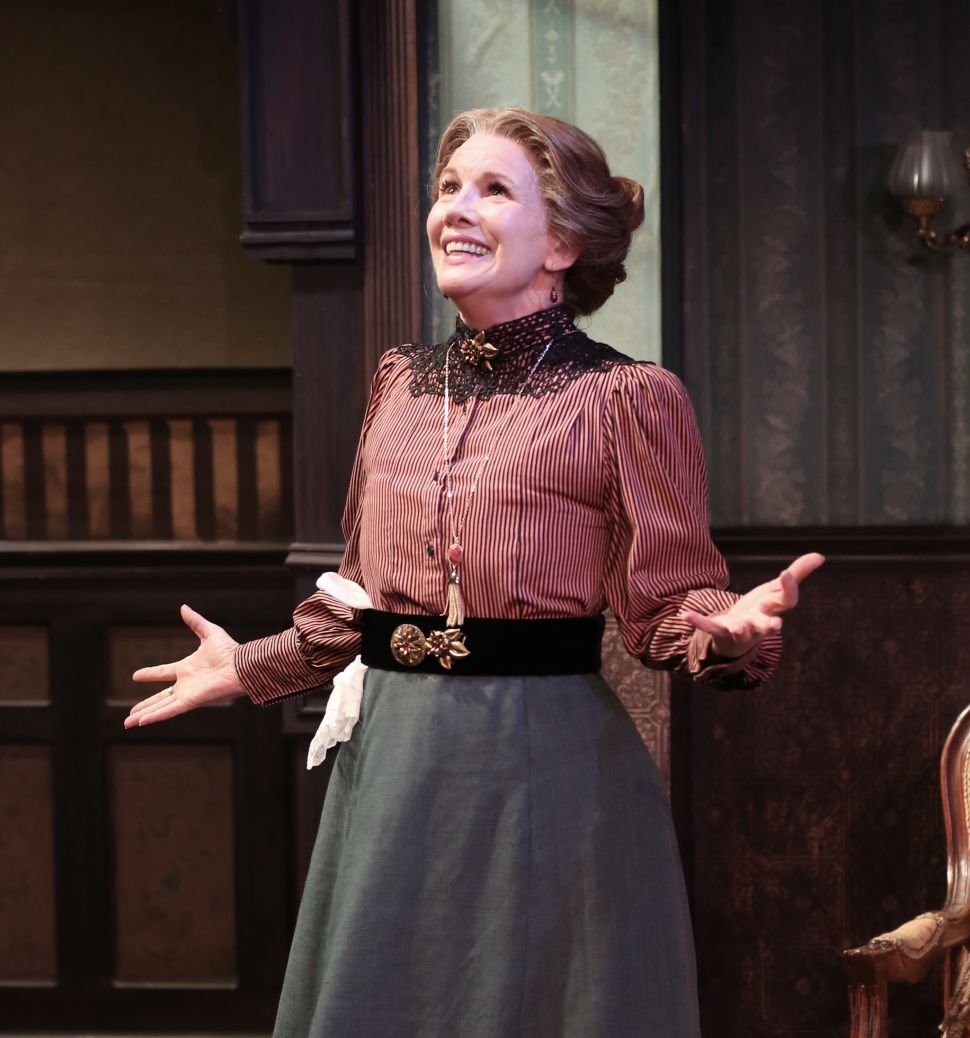