In the obscure realm of performance-badged offshoots of luxury brands, the AMG C43 Coupe from Mercedes-Benz stands out, or at least peeks out, from the crowd. This two-door, which I drove way too fast all week, has a three-liter six-cylinder twin turbo engine that gets 362 horsepower, and can go zero to 60 in not much more than four seconds—perfect for roaring away from the valet stand. It makes a lot of dramatic putt-putt noise, even more so if you jack it down into Sport +, where colors glow ominously and the car spews oil and thumbtacks over the road. Every chance I got, I flipped a switch, moved into the passing lane, and roared away.

There’s also a C63 with eight cylinders, but that seems excessive. You don’t need more than 362 horsepower unless you’re towing a house or trying to win a dirt-track race. The C43 coupe wasn’t designed to do either of those things. It has a custom sport suspension and a nine-speed transmission with paddle shifters. The car drives small and low and tight, coiled and precise, sharp and not at all cozy.

AMG does an amazing job of approximating a racing feel, even if that feel is often wasted by having to get in line behind thousands of competitor cars meandering their way out to the lake. It was a real burner, and I can see why it’s getting more popular within the subsection of the subsection that cares about such things. The brand actually outsold Porsche in some markets last year, so it’s rising in popularity, even though its total clientele is less than the number of people who go to Madison Square Garden on an average night.

Not that most people can afford an indulgence like this. The C43 AMG Coupe starts at $55,000, which, in our disturbed times, causes ordinarily rational people to say “oh, that’s not so bad.” But after multiple add-ons, the model I drove came out to more than $67,000, which seems semi-bad. The car doesn’t have a lot of passenger space. It fits four uncomfortably. There’s not a lot of trunk space either. The model I had didn’t boast EPA numbers yet. The previous year’s averaged in the mid-20s, which is about what you can expect for a weekend sports car for aspiring hedge-fund overlords, people with money and gas to burn.

On the other hand, when you buy a Mercedes, you’re investing in future technology, or at least a simulacrum. The AMG cars don’t have Tesla’s console touch screens or mellow design palate, but the company’s excellent self-driving technology, debuted in the S Class barely 18 months ago, has now trickled down to the full fleet. In a couple of years, all Mercedes products will be driving themselves off the production line. With a premium holding like this one, for a low low add-on cost of $5,500, you get the maximum package, and it is great.

When I found myself trapped in rush hour (which, where I live, lasts from about 6 AM to midnight) I could press a couple of buttons, flick a switch, calibrate a setting, and then suddenly the AMG C43 Coupe was driving itself, stopping and going with the flow of traffic. When I activated the turn signal, it waited for an opening, and then seamlessly moved into the next lane. My feet didn’t touch the pedals for a half-hour at a time. This was ideal, because I don’t really want to drive unless the road is wide open or unless I’m absolutely forced to. Anything in the Mercedes lineup above the CLA or GLA offers that possibility.

So, to sum: The AMG C43 Coupe is fast, fun, wicked, and kind-of expensive. It can also can drive itself for long stretches. Five years ago, that would have been a revolutionary dream car. But with the rumblings from Silicon Valley, not to mention the impending launches of electric luxury cars from most of the major brands, obsolescence is almost baked into the hardware.

While Elon Musk goes about his merry business of transforming the car industry, his competitors are flailing on the margins, twiddling around with variants of variants. Porsche and Audi and Lexus seem like semi-retired rock stars content to strum on side projects, hoping that some of their rich clients can still hear the groove. Mercedes is no different. When Tesla hits full stride, this is the kind of car that will feel the full impact first. The AMG C43 Coupe may be best in class, or close to it, but it’s also one of the last dinosaurs. 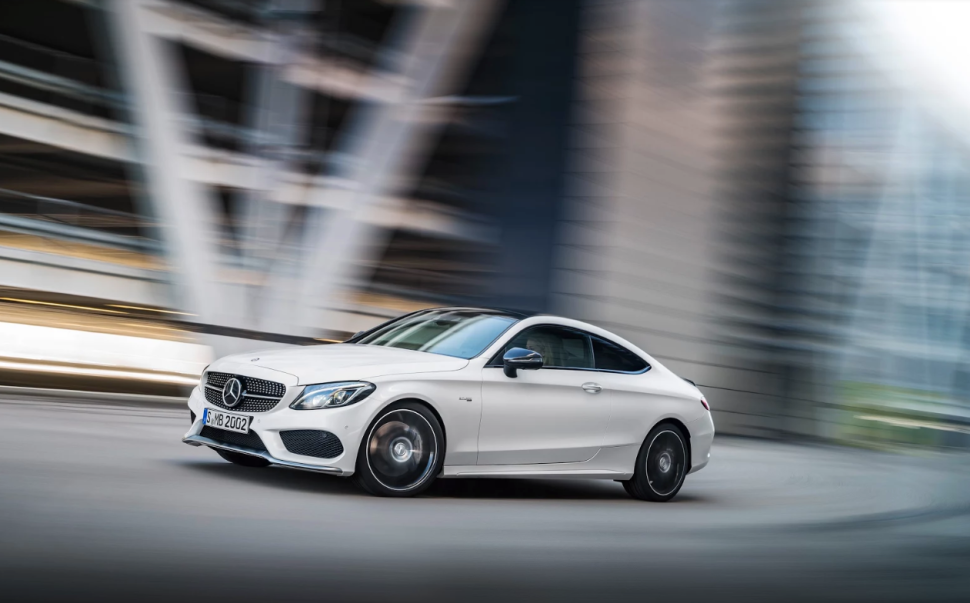