It had to happen. After his roly-poly rise to fame with a roster of controversial films created out of moral high dudgeon and pure moxie to juggle injustice and right wrongs, it was inevitable that writer-director Michael Moore would land on Broadway. Raising a few snoring consciences at the legendary Belasco Theatre, where the ghost of its famous producer namesake is said to haunt the premises after midnight, Moore has fashioned a funny, colorful and totally entertaining one-man show called The Terms of My Surrender. I expected to be challenged, embarrassed, provoked and possibly enraged by so many condensed and concentrated opinions at one sitting (without intermission). What I did not expect, in the bargain, was to have such a good time.

He’s the ultimate liberal. He tries to do the right thing and I applaud him for doing it with such a sense of humor. This is New York, so of course he’s preaching to the choir. But when he waddles out to thunderous applause as the stage lights up in wooden boards of red, white and blue stars and stripes designed by David Rockwell to resemble the American flag, he opens with one question: “How the fuck did this happen?” and he’s not talking about his Broadway debut. It doesn’t take long before it’s clear to all and sundry that he means the mess we’re in as a country, a world, and a whole human race. He talks about the absurdity of the electoral college, he crucifies the 54 percent of American women who voted for Donald Trump, the 44 million disenfranchised coal miners and auto workers who watched his reality TV show, yelling “You’re fired” while hawking a promise for new jobs, and American voters who are so easily manipulated that they vote against their own best interests, reminding a cheering sold-out audience “Yes, the president of the United States can be removed!” But the new president’s supporters should rest easy. Cleverly, Moore keeps a lighted box empty, hoping for the arrival of Mr. Trump and his family, whom he has invited free. So far, no response. But he doesn’t limit his barbs to The Donald. In a second-rate world where nothing works anymore, Moore finds targets everywhere. His subjects include gun control, North Korea, the lunacy of carry-on items banned on airplanes by the TSA, cell phones and New York’s horrible airports. Regardless of your politics, he’s so persuasive and charming that you end up agreeing with him in spite of yourself.

You also learn things. His first target, when he was merely a 17-year-old Michigan high school student, was the racial discrimination in the whites-only Elks Club at the same time that flag-waving institution was sponsoring a hypocritical essay contest on the achievements of Abraham Lincoln. Moore won, then rejected the prize, causing his first liberal scandal. At 18, he followed that victory by hiring 25 stoners who would sign anything  to get his name on the ballot for a Michigan school board election and became the youngest elected official in America. The first thing he did after winning was fire the crook who was his high school principal.

To further demonstrate how one person can make a difference by doing one remarkable thing, he gives real examples. One of them is the possibility of running for office himself in 2020. If he’s elected president, he promises the abolition of low shower heads that benefit nobody but midgets, a campaign season that lasts only eight weeks, the legalization of pot, and free HBO for all. I like the idea he proposes that if the Republicans want to send Americans to war, their kids go first. But I could do without the game show with contestants plucked from the audience to prove Canadians are smarter than Americans. It comes dangerously close to filler. In a moment of rare seriousness, he candidly discussed the death threats he has received that defy everyone’s Constitutionally guaranteed protection of freedom of speech. And his attack against the Republican governor of Michigan responsible for poisoning the citizens of Flint, his hometown, with toxic chemical waste pumped into the supply, is a chilling  contemporary reminder of  Ibsen’s Enemy of the People. He’s a cheerleader for the Democrats, but he’s not an obnoxious roustabout like Ann Coulter is for the other side of the aisle. He might seem strident in life but not onstage, and he gets his points across as persuasively as other liberals like Bill Maher and Lawrence O”Donnell. In The Terms of My Surrender  he accepts the show business technique of winning the audience without  preaching a sermon. Directed by Michael Mayer (Hedwig and the Angry Inch), he even brings out two hunks in star-spangled jock straps and a girl in a red sequin bikini and joins them in a sexy musical production number that brings down the house. He’s merely demonstrating the importance of replacing the dynamics of corruption and selfishness with compassion and a respect for humanity, and a little razzle-dazzle. It takes daring. I wonder if the Republicans have the courage to see it with the same sense of comic timing as Michael Moore. 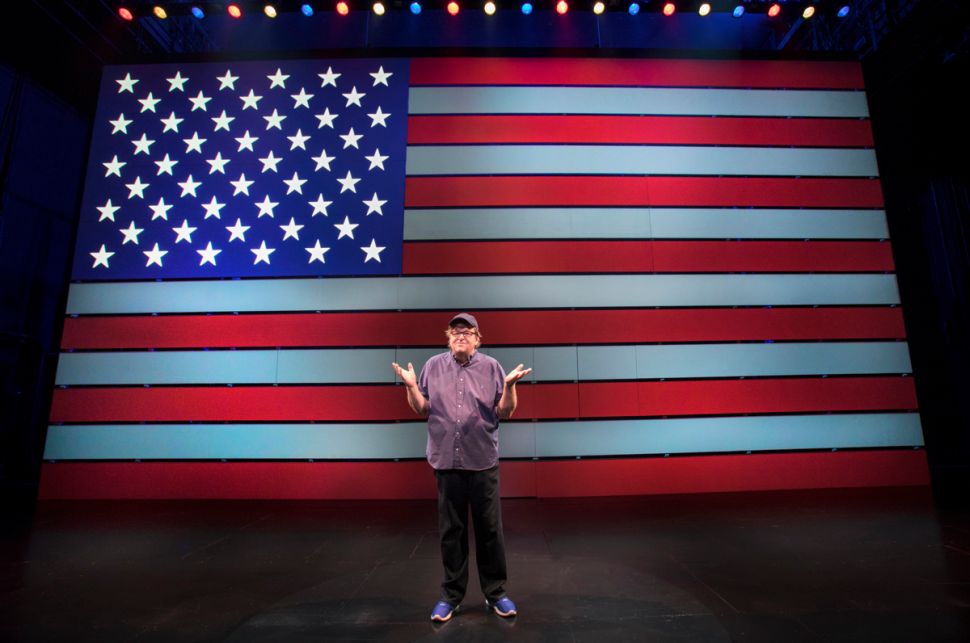