Riding herd over such an unruly crew of seasoned comics, young Urie led this Red Bull Theater revival of Nikolai Gogol’s 19th century take on shady, rustic Russian bureaucracy through a sold-out six-week run at The Duke on 42nd Street, and straight into an extra six-week inning at New World Stages (which ends Aug. 20).

He then plans to sleep for eight days before heading into rehearsals for his next lead role as Arnold Beckoff, the gay drag performer who longs for home and hearth, in a 35th anniversary production of Harvey Fierstein’s Torch Song Trilogy. Directed by Moises Kaufman and co-starring Mercedes Ruehl, it will begin previews Sept. 26 for an eight-week run at Second Stage’s Tony Kiser Theater, starting in late October.

And by the year’s end, Urie will be thoroughly immersed in the ultimate in title roles—one that Kline has taken on twice: Hamlet. Talk about a change of pace! That, he’ll do at Washington D.C.’s Shakespeare Theater Company, starting Jan. 16, for his old Juilliard teacher, Michael Kahn, the company’s artistic director of over three decades.

“I don’t know if I would have necessarily chosen to do these three parts back-to-back-to-back,” Urie admitted the other day when he dropped by Emmett O’Lunney’s to grab a bite between shows. “They’re so demanding—both physically and emotionally—but they are also just too good to pass up. I simply couldn’t say no.”

He would have preferred to time them better. “The Government Inspector obviously wasn’t supposed to run this long. I thought I had all summer to work on Torch Song, but to keep playing with a cast like this, in a role like this, was just too irresistible.”

Stardom is a shiny new penny for Urie. The only time he ever actually starred in a show before was when he comprised the entire cast and played all the parts. That was for Jonathan Tolins’ Buyer and Cellar, in which he was an out-of-work actor who ran an underground boutique mall in Barbra Streisand’s Malibu compound. Off-Broadway and on tour, Urie did that role 600 times. He originally signed up for just six weeks, but the popularity of the piece got out of hand and kept him busy almost four years.

That success marked a turn for him. He now has enough star heft to hang a show on, and directors have started to come to him with their projects. Red Bull’s artistic director, Jesse Berger, thought Urie’s wide-eyed amiability perfect for the out-of-work Russian clerk. The character is mistaken by the leaders of a town for a state official who has arrived to sniff out and stop the plentiful civic corruption going on. They ply him with local wine that has been fermented in a spittoon, sending him off on a hilarious, epic toot that spills over both levels of a two-tiered set. Sweet shades of Kevin Kline! “No, we haven’t had any accidents,” Urie said, anticipating the next question. “We were all very worried when we saw the set because we had obviously rehearsed it on one level with the set taped to the floor. In reality, it’s an eight-foot drop!”

Urie and Berger collaborated on the casting. “I just wanted everyone to be funny—and nice. Most actors are nice, but, because there are so many of us up there, I knew we had to be gracious and generous with each other, take turns,” Urie says. And in the riotous cast he ended up working with, he found a very supportive crew. “Jerry Zaks once said something I thought was brilliant when I worked with him. He said, ‘Every laugh exists between two people.’ If I get a laugh, it’s not just because of what I did. It’s also because these people around me setting up what I’m doing. I’ll do something, and it’s only funny because of what everyone else is doing. I knew this play was going to be filled with stuff like that.”

As for his Torch Song Trilogy director, Urie met director Kaufman through Jessica Chastain (his Juliet at Juilliard) when she was working on The Heiress on Broadway. The idea of reviving Torch Song Trilogy came up. “I gave it a read, and it felt fresh. So many of the things that Arnold is going through are what we were going through six years ago, before marriage equality.”

Playwright Fierstein had been toying with the idea of reviving his Torch Song Trilogy without the torch singer to separate the scenes. Even the title is now shortened—to just Torch Song. Kaufman arranged a play reading with Urie for Fierstein in a conference room.

“My audition for Torch Song was getting to read the whole play,” said Urie. “Usually, you do a couple of scenes, and you’ve got to nail them. If you do the whole play, then you’re going to nail some things and not nail others, but they see you going through the whole play. I’m so glad that’s how I got the job. They said, ‘That’s what we want, warts and all.’ I never saw Harvey do it, but I know his work from movies and other plays. I hear him in every line. I’ll never sound like him, but I know how he did it.”

Urie spent his 37th birthday last Tuesday “researching” the role that follows on from his Torch Song stint . His partner, actor Ryan Spahn, surprised him with tickets to Oscar Isaac’s Hamlet down at The Public. “I didn’t really plan to see Hamlet on my birthday because it’s four hours long and my night off—I would have probably wanted to see Spider-Man or something silly—but it was actually a great thing to do on my because it was a beautiful production, and Oscar is an old friend from Juilliard.

“I saw him after the show and told him I heard things I’d never heard before in his version. He said, ‘Everyone who plays Hamlet has a camera and zooms in on things as they see fit.’ That’s such a fascinating way to look at great roles and why, when you’re going to play Hamlet, it’s totally OK—and, in fact, imperative—you embrace other versions, other people’s Hamlets. I think most actors have a drive to play the role. It just is everything. It’s all the things you want to do as an actor. It’s all there.

“With that show, I feel if you’re going to play Hamlet, you cannot see it too many times. I’ve seen all the movies, and I was Horatio to Hamish Linklater’s Hamlet in a South Coast Rep production directed by Dan Sullivan. He was so good in the play. When he heard that I got the role, he texted me, ‘Is this Hamlet? This is Hamlet.’”

“I have worked on it many times and with another director over the course of a few years, but I’ve never been asked to do it. In Michael Kahn’s acting course at Juilliard, Jessica Chastain and I did the nunnery scene. The idea that now I get to do it with someone I trust as viscerally as Michael—I can’t image a better situation than that.”

Almost all of Urie’s work has been in theater, but he did make a memorable swipe at episodic sitcom, playing Marc St. James, willing flunky and whipping boy for fashion magazine executive Wilhemina Slater (Vanessa Williams) in the Ugly Betty TV series.

But within his narrow field of operation, he has amassed a mighty armada of stage trophies: Drama Desk awards for both Outstanding Ensemble (The Temperamentals) and Outstanding Solo (Buyer and Cellar); Lucille Lortel awards for both of those shows; a Los Angeles Drama Critics Circle Award, an Outer Critics Circle Award and a Clarence Derwent Award for Buyer and Cellar; an Obie for Homos, Or Everyone in America, and a Theater World Award for The Temperamentals. With the way things are starting to line up for him these days, it looks like he may need a longer shelf. 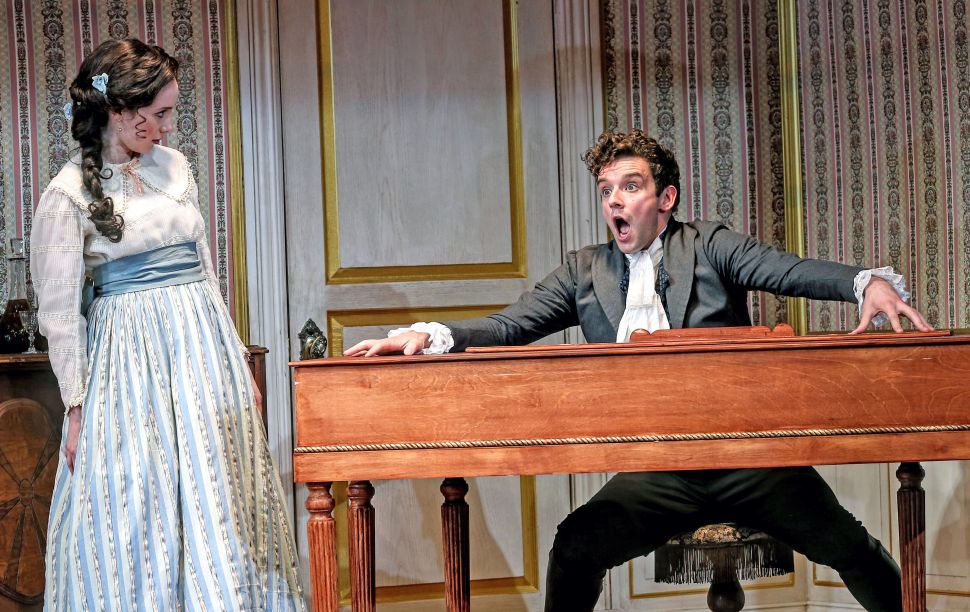