Millennials certainly have a bad reputation these days, whether they’re being accused of killing the Canadian tourism industry, the beer industry or sex. At this point, it’s a wonder any institution is still standing, what with the murderous rampage 20 and 30 somethings have been on (here are 70 other examples, including the McDonald’s McWrap, handshakes and the Toyota Scion—RIP). But philanthropic siblings Toby and Larry Milstein want to give back, all while reclaiming the millennial title that has been handed to their generation.

The scions of Cheryl and Philip Millstein, of the Forbes-ranked real estate family, are partnering with the Humans Right Campaign to throw The Millennial Pink Party, replete with plenty of the signature shade first made infamous on Tumblr.

The particular hue in question has been seen everywhere from downtown restaurants to Lauren Conrad’s clothing collection (although she prefers to call it blush), and its popularity seems endless.

But while some consider it a frivolous hue, the Milstein sibs want to reimagine it on behalf of the LGBTQ+ community. They’re partnering with HRC board member Justin Mikita, who’s married to Modern Family star Jesse Tyler Ferguson, to host the Hamptons event.

“Rather than pink symbolizing weakness or femininity, our generation has claimed this particular shade to be a color of empowerment and nonconformity,” Larry told the Observer.

“We created the Millennial Pink Party in this spirit to bring together fellow members of our generation that we admired, and to channel our collective passion towards supporting a cause that fights on behalf of all people, regardless of gender, sexual orientation, race or class,” he continued. The party “demonstrates that—far from the common misconception—millennials are a generation deeply concerned with the issues of our time.”

Mikita agreed. “While we’ve had many successes over the past couple of years, with marriage and the repeal of DADT, never before have we seen more energy and unity among all marginalized communities to make our demands for equality known. The current climate has activated a movement of resistance so powerful that we are only just starting to see what it is capable of,” he said of the partnership.

The #MillennialPinkParty is capped at 150 guests, leaving outliers thirsty for invitations. To secure a ticket, attendees must Venmo $100 to the party’s account, with all proceeds going towards HRC.

DJ Nicole Rosé will be spinning, alongside food from Seamore’s (the brainchild of chef Michael Chernow, the founder of fitness drink WellWell). There will be Bai drinks and pink coconuts from the dating app Bumble to pose with. Dessert is to be provided by the Insta-bait creators at Jars by Dani and the party favor totes will be stocked with beauty products, courtesy of Coveteur, all in the color.

“We were selective in reaching out to companies whose missions and values closely aligned with that of the Millennial Pink Party,” Toby explained, adding that they made sure to partner with brands run by close friends or fellow millennials.

And as for the guest list, Toby told us, “We were mindful in putting together a unique group of attendees that cut across industries and backgrounds, whether the arts, fashion, finance, tech and media. The goal was to bring together individuals who have demonstrated themselves as emerging leaders in their respective fields, and foster an environment of openness that facilitates genuine connection among invited guests. We are currently working off of a waitlist for interested attendees.” 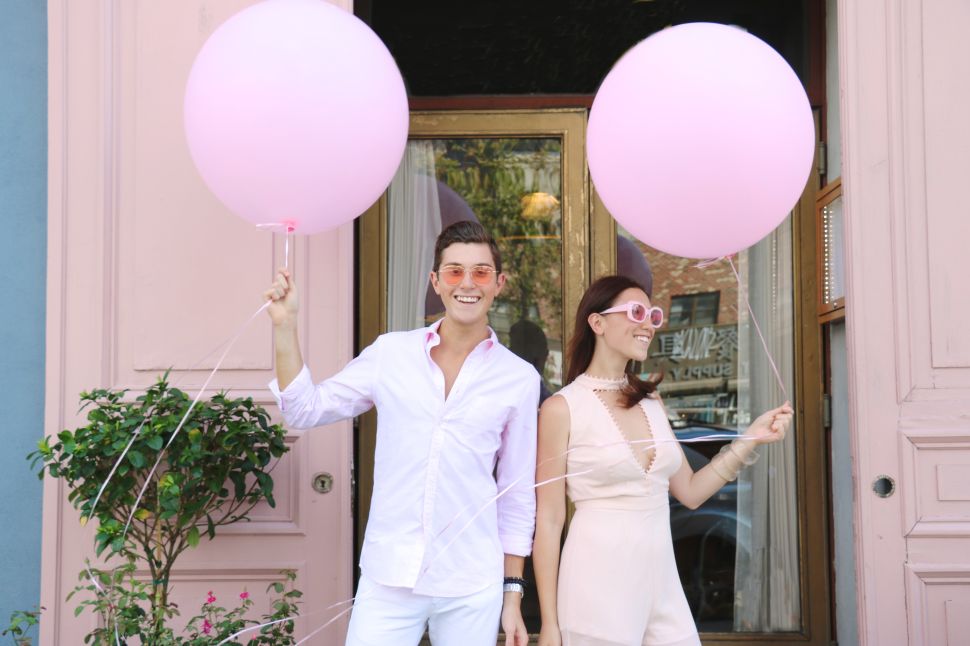