The preferred Challenge format for many die-hard fans is this: morning house drama, weekly challenge, nominations, elimination, hit da club, then late night drama. It’s a tried and true breakdown that gives us a little bit of everything that we want all in one episode. The problem with that rundown is that it is a formula. And no matter how successful the formula becomes, it inevitably begins to feel, well, formulaic. You may enjoy the ride but you know where the twists, turns, and drops are. Coca Cola is a classic but that doesn’t stop them from mixing up a new flavor every few years.

This week’s episode took place in the time period of last week’s challenge. It went through the nominations and ended at that same elimination. It’s about a half-week’s worth of gameplay, but because so much occurred it got its own full hour. Every season needs one or two episodes like this, just to keep things interesting—consider it the Cherry Coke Zero of the show.

There were a lot of heavy hitter players vulnerable for the Presidio after last week’s mismatched team challenge. It was an embarrassment of riches. Cory has been gunning for Johnny Bananas since the jump. He has a hit list. He’s already scratched Darrell off it week one. Now there’s Johnny, CT, and Derrick left. At the club, Cory and Johnny start jawing back-and-forth about whose game it is now. Johnny has won six times so it’s his game if it’s anyone’s game. I personally believe the Challenge belongs to the people. Cory does have the right strategy, though. If you keep taking shots at Johnny, he may get eliminated. If you take no shots at Johnny, he’ll make it to the end and probably win. While Johnny and Cory are arguing, an inebriated Nelson decides to come to Cory’s aid, stumbling into a table on the way and pushing away bouncers. Of course this gets him kicked out of the bar. Good club drama: check.

Back at the house—still that night, everyone still lit—Drunk Tony decides to make an appearance. Drunk Tony is an issue. He gets himself into bad situations that were originally entertaining many years ago until they started to go way too far and involve other houseguests. He usually ends up getting into a verbal or physical altercation with someone, and one or both are kicked off the show. Tony stopped drinking on the last Challenge he was on, showing that Sober Tony is a lot more amicable. The irony that Drunk Tony was cooking eggs when this fight started is not lost on me, as the last fight he got into with Camila on Rivals 3 involved him Hulk-smashing a carton of eggs while yelling at her. Tony told Cara Maria that she looked like his mom at 60. Then forgot he said it and when Cara referenced the words that had just come out of his mouth, Tony got mad that she was talking about his mom. It got heated but Johnny managed to talk him upstairs to bed. Late night drama: check.

The narrative of this episode centered on Kailah and Jenna being great friends. We see them doing handsprings and pattycake pushups. They mention that they’re each other’s only alliances about as many times as TJ says this season is “dirty.” So it’s absolutely no surprise that they end up against each other in the elimination. The winning team, led by Marie, wants to get rid of a better competitor. So their targets are Kailah or Camila. But everyone is terrified of the Camilanator so Kailah gets thrown in. I was surprised that they got so personal with it. The perfect justification to put Kailah in would be: you picked the teams so you deserve to go in and leave it at that. In the double cross round, Jemmeye pulled it and had to choose. Jenna saved Jemmeye in week one, instead of Toya, so the players were shocked Jemmeye said Jenna’s name. But the episode was already so set up that it was clear this was coming. Even though nobody said Camila’s name, she still vowed revenge on anyone who even thought it.

On the men’s side, Cara Maria really wanted to vote in Tony because of the previous night’s altercation. Plus, Tony has a history of not winning things. She went along with the house and put Ammo in because he is a rookie and didn’t compete in the team challenge. But she ethered Tony with a speech about his behavior. TJ heard Tony was drunk again and gave him the “Tony, what are you doing, don’t blow this speech” which is like your favorite teacher telling you they’re disappointed with you. TJ also asked Ammo who he wanted to face and he said “whoever drank the most last night” which was either Drunk Nelson or Drunk Tony. Cory also still voted for Bananas even though he had no numbers, which is petty, good television, and bad strategy, but those two are too far gone at this point to mend the tear.

Cory tried to convince Nelson to say Johnny if he got the double cross, which he did. But instead he picked Tony and claimed it was because Ammo asked him for that. Ammo, who is an amazing addition to the show, was like “ummm, I don’t think I did that.” Either Nelson took his “the drunkest person” answer seriously or just didn’t want to get on Johnny’s bad side. Either way, Ammo called him out on it. Ammo is all good feelings and try your best, and be who you are and shear bodysuits and thongs and good dangly earrings.

In the elimination, Kailah just barely beat Jenna. And Tony had Ammo for sure and then pulled the most Tony move, slipping down the wall they were climbing at the last second and losing. It was the closest I’ve ever seen two eliminations go on the same night. You kind-of just have to watch it—there aren’t proper metaphors to convey this fact. Kailah had strong words for everyone since they were clearly rooting for Jenna. Ammo had love for everyone because Ammo is a human Care Bear. Little does anyone know, that Jenna and Tony are not going home, they’re joining the Redemption House, where Darrell and Devin are plotting on the strongest way to re-enter the game. That’s coming next week and it’s going to be quite a thing to see. 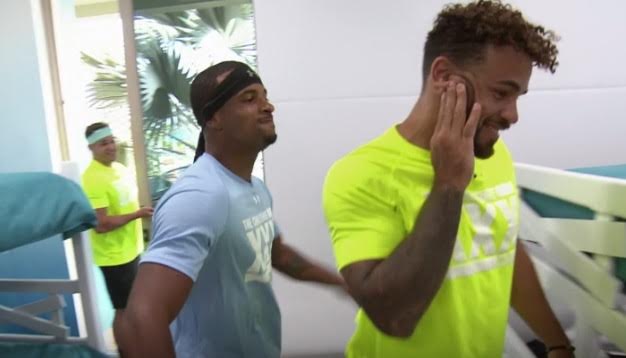