The Redemption House has been a welcome addition to the dirtiness of this season’s Challenge. Has your fave been taken out too early? Worry not—they still have a shot to make it back into the game. Big Brother and Survivor have used this tactic for years. It’s an easy blindside for the main group of competitors—they generally don’t know it’s coming. There’s always a solid revenge narrative created because if you’ve been eliminated, somebody (maybe even multiple people) helped send you packing. Plus it provides drama in a second location. See Shane and Simone’s disqualifying fight in episode two.

After last week’s elimination, Tony and Jenna were the two newest members of the Redemption House. When they showed up, it was either the middle of the night or everyone was passed out midday. Amanda was very excited to see Jenna, not because they like each other but because Jenna was the person to eliminate Amanda in the first episode. Amanda and Jenna also don’t get along ever since the Challenge:Invasion of the Champions when Amanda spread the rumor that Bruno had intimate relations with Jenna on an airplane. TJ shows up to the house and gets everyone to call out who they want revenge on from the active players. Then he announces that only one guy and one girl will make it back in the game. Everyone else is going home for good.

You can clearly tell that TJ is enjoying this conceit—he’s smiling more this season and really relishing dropping these bombshells on the players. TJ lines up all the players like it’s a regular competition week. There’s a platform hanging up high over the . He introduces the challenge but then gives a strong arm wave that would immediately get him a job as a floor model on The Prince is Right and tells everyone they’re not playing it, the eliminated players in the slowly puttering motorboat are competing. The boat looks like they just came back from helping Willard track down Colonel Kurtz. Certain people are thrilled about these possible developments: Johnny at getting Tony back, Kailah being reunited with her best friend, Jenna. Some are not happy, Cory seeing any of the people he eliminated returning, Jemmeye having Jenna back after last week’s blindside. It’s intense.

The challenge has two people start up on the platform (in the order they were eliminated from the show) and the first one to hit the loses. They have to wrestle or do whatever it takes to get the other person off. Darrell beats Devin. Tony takes out Derrick. And then then Tony pulls off the ultimate upset and gets Darrell to fall with him and hit the first. Tony is back in the house. For the women, Amanda beats Toya and Jenna beats Briana without falling into the . She does the same thing to Amanda, kicking her until she falls off the platform. Camila is very happy about this because her and Amanda hate one another, and she busts out her middle-finger dance. Somehow, Jenna is the only one who gets through the whole competition without ever getting a drop of on her. Tony reenters the house with a new purpose. Before Jenna can even put her bags down, Marie pulls her over to talk and let it be known that she wanted Jemmeye to put Camila in against Kailah, not Jenna. Jenna and Kailah still have big targets on their backs, which upsets Kailah because she doesn’t feel like she did anything to deserve everyone coming after her. She ends the episode crying to Cory about it. The Redemption House is over but the dirtiness of the game has just begun. 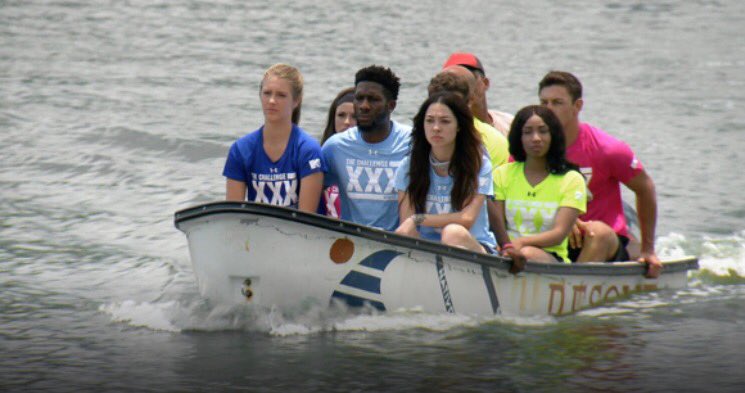