NEWARK — Democratic gubernatorial nominee Phil Murphy said that Gov. Chris Christie lacks “any credibility on the economy,” a response to Monday statements made by Christie that Murphy’s plan to boost taxes $1.3 billion will increase costs for New Jersey’s middle class.

“The economy has not grown and we have become, in addition to that, profoundly unfair,” said Murphy of Christie’s tenure in the State House. “I want to stand not the side of both growth and fairness. There is no reason you can’t do both.”

Murphy is facing Republican nominee Kim Guadagno, Christie’s lieutenant governor, in the November race. Guadagno’s plan is focused on tax reduction and hinges on a “circuit breaker” on property taxes that could credit families with up to $3,000 to defray their homeowner taxes. Murphy wants to impose a millionaire’s tax on wealthy residents, something his campaign estimates would inject $600 million into the New Jersey budget. On Monday, Christie said that increasing taxes on the wealthy would encourage them to flee the state.

“I am telling the people of New Jersey now, he is coming for your money,” Christie said of Murphy on Monday. “There are no longer enough wealthy people in this state to pay for everything he wants to pay for and so he is going to have to come for the middle class, and he will.”

On Tuesday, Murphy said: “People will come here and stay here whether they are individuals or companies if they feel like they are getting good value for money. Right now, under this administration, they are not. The premium to be here has gone up and up and up and the basket of stuff you get for being here whether you are a person or a company has been shrinking.”

Under Christie, the state has had 11 credit downgrades combined from Fitch Ratings, Moody’s Investors Service and S&P Global Ratings. Last year, New Jersey was the state in the country with the most home foreclosures.

Christie also blasted Murphy on Monday for hailing from Massachusetts. “Phil Murphy is a Massachusetts liberal, the worst kind,” the governor said.

But Murphy took those comments in stride, acknowledging that he made the choice as an adult to move to New Jersey with his wife and raise his four children in a state he “loves.” Murphy also says that he sees a lot of positive progress coming out of Massachusetts, something that he hopes can be replicated in New Jersey.

“Whatever they’re doing its working a lot better than what we are doing here under this administration,” Murphy said, citing Massachusetts’ rate of job growth since the recession.

Murphy and Christie both criticized President Trump’s comments last week about the violent clash between neo-Nazi protesters and counter-protesters in Charlottesville, Va.

On Monday, Christie said it was a “mistake” for Trump to say that there was blame on both sides and that the president should apologize. But Murphy said that an apology is not enough, given the president’s track record.

“I am glad the governor said that,” Murphy said. “Secondly, if you listen to Republican leadership — and it’s not just the governor, it is the speaker of the House, it is others — you get the impression that we should forgive this guy because he still has his training wheels on. Moral authority is a pass-fail test. … Either you’ve got it or you don’t and he proved that he doesn’t, sadly.”

Murphy’s comments came after a Newark event with the Rev. Al Sharpton focused on bringing science and technology into less-advantaged communities, something the Murphy says he envisions as part of a future “innovation economy” for New Jersey. 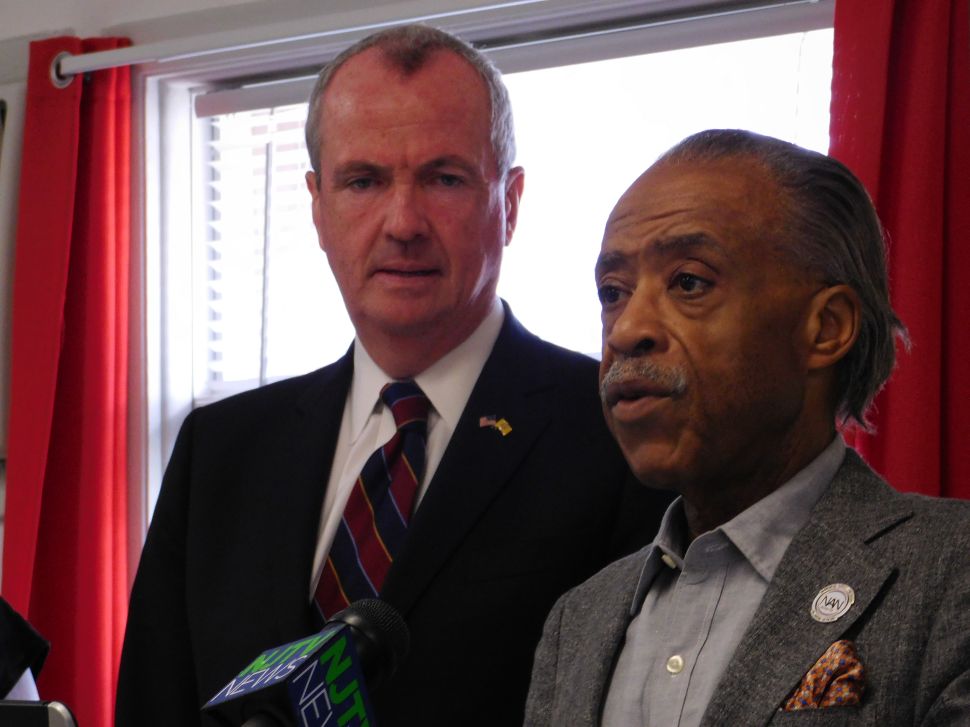