At the great naval Battle of Jutland in 1916 when two of his battle cruisers exploded under the guns of the German High Seas Fleet, their commander, Royal Navy Vice Admiral David Beatty, furiously muttered, “There seems to be something wrong with our bloody ships today.” Given the number of recent naval mishaps in the U.S. Seventh Fleet—especially those of the USS Fitzgerald and later USS John S. McCain, in which 10 sailors were killed—the same comment can be leveled against the U.S. Navy. The question is what went wrong?

The most immediate answers are clear. Down to about 280 ships from over 300 a decade before, the Navy has not reduced its operational requirements accordingly. This means ships, especially in the Pacific, are spending more time at sea. Because of the idiocy of the funding process, Congress has not passed a defense budget in years and the services must rely on continuing resolutions for funding that are in essence cuts and sequestration, which forces arbitrary and mandatory reductions. As a result, maintenance and training have suffered.

While each is true, those are not the only answers. And these broader answers reflect a far larger vulnerability that the Pentagon and the nation at large face. The fundamental causes of these naval mishaps are institutional, imposed by the Navy for what were thought to be sound reasons at the time. Unfortunately, those judgments proved hollow.

First, neither the Naval Academy nor OCS produces naval officers qualified to fill seagoing billets without further training. The Surface Officer Warfare School that conducted this preparation was eliminated and ensigns were sent to sea in large numbers. Commanding officers and distance learning means were put in place to conduct this training. That did not work.

Technology is also a culprit. The bridge of a modern warship is loaded with super technology. Radars and sonars have been augmented with infrared sensors and night vision devices. Computers navigate by GPS (global positioning system) and alert watch standers of potential dangers of collision or when in restricted waters. Seaman’s eye and good seamanship have been partially replaced by technology. As a result, traditional mariners’ skills have atrophied.

Each of the services faces potential similar problems mandated by judgments at the time that made sense given the pressures and demands. These institutional decisions have vulnerabilities of their own. For example, American military forces are entirely dependent today on the network and GPS that provide the life’s blood of C3I (command, control and intelligence) to logistics and from firing precision ordinance against the enemy to supplying cheeseburgers and smart phones to forward operation bases.

Similarly, society at large is dependent on the Internet, cell phones and electronic everything from depositing money in banks to paying bills and having intimate conversations with friends. Cyber attacks and hacking are the most well known disrupters that exploit these vulnerabilities.

The Pentagon is well aware of many of these vulnerabilities. Naval officers are oiling ancient sextants to navigate by the sun and stars.  Soldiers and marines are reading maps instead of iPads. And “distributed operations” that assume the “net” no longer works are being practiced.

Given that the other services may face issues similar to the Navy’s, the Pentagon would be well advised to conduct a major review of these potential vulnerabilities created by institutional choices. Two topics are less visible although possibly more important. The first has to do with preparing flag and general officer for higher command and geopolitical and strategic issues. The second has to do with civilian control of the military.

Because of the demands of 16 years of war, most officers have been preoccupied with tactical operations in Iraq, Afghanistan and against terror. Here the experience has been substantial. However, war colleges and assignments that are better preparation for high command have held lesser priority for operational reasons. This particularly applies to flag officers. Although short courses for newly selected one and three star officers are in place, four stars have virtually no time for preparation for next assignments in large part because of Congressional limits on numbers of general officers. All this must change if officers are to be ready for future demands.

Second, in confronting these naval mishaps, Chief of Naval Operations Admiral John Richardson and Vice Chief Admiral Bill Moran have acted quickly first in replacing the Seventh Fleet Commander and then directing a major investigation headed by a four star admiral. But the law unequivocally states that responsibility for “training, equipping and manning the services” rests with the service secretaries and not their uniformed subordinates. While the National Defense Authorization Act of 2017 places more authority with service chiefs, perhaps the roles and responsibilities of service secretaries should be examined to determine whether or not each has too few or too many authorities and if the nation wishes to maintain civilian control of its military at the service level. 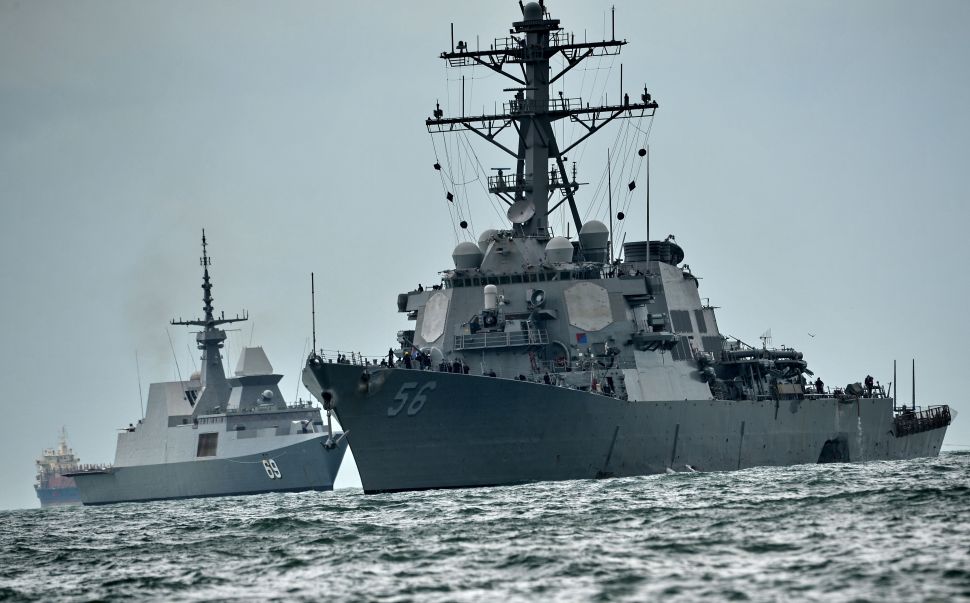