Richard Gerstl (1883-1908), a prodigy from a rich Austrian family, took his own life at the age of 25 more than a century ago. Prolific for his young age, he often painted landscapes and the people around him. But most of all, he painted himself.

There are 10 self-portraits in Gerstl’s first exhibition in the United States, which runs at the Neue Galerie through September 25. The gaunt face on the catalog’s cover, Self Portrait, Laughing, painted when Gerstl was 23, shows him with his mouth agape, as a light that seems to come from a fire illuminates from below. His hair is cropped short, like a convict’s. The light brown flecks on the abstract background could be the scratched wall of a prison cell. It’s an eerie, haunting image. Something’s not right.

And something wasn’t right. Gerstl killed himself just after he turned 25, stabbing himself after he had placed a rope around his neck—a shocking image, even by Gerstl’s standards. Van Gogh, a mighty self-portraitist, would die at 37, Seurat at 36, Schiele at 28.

During his brief lifetime, Gerstl never exhibited a painting and never sold one. His pictures were more somber and penetrating than those of the decorously successful Gustav Klimt. By the time of Gerstl’s death in 1908, Egon Schiele, at 18, was a promising talent, but not yet an enfant terrible.

No one knew what happened to Gerstl’s work after his suicide, until one of his brothers took all the pictures he left behind to a dealer in Vienna in 1931.  Austria and other European countries would become aware of Gerstl’s rare talent before World War II. In this country, the process has taken longer. We know of some 90 works by Gerstl. The Neue Galerie is showing more than 50. This exhibition is the rare chance to see some remarkable work.

Today’s audience can’t help but think of Gerstl’s relentless self-portraiture as a precursor of the selfie syndrome. For Gerstl, it was and it wasn’t. The young man had the facility and the urgency to depict himself again and again, working in and out of styles that reflected what was out there in the art world, and what emerged from his mysterious self. But it was Vienna, and he didn’t send them around to all his friends.

And this wasn’t automatic Instagram self-documentation. As you look at Gerstl’s pictures of himself, sometimes composed in pointillist dots that seem borrowed from Georges Seurat, sometimes in unruly crossed lines that prefigure the work of Alberto Giacometti, you feel Gerstl’s process of self-exploration unfolding. Assimilating and overtaking the revolutionary styles of his time was achievable for Gerstl. Less achievable, since his way of depicting himself was constantly in flux, was containing himself in a single likeness. Expressed in the clichés of art criticism—the form was easy for this young talent, and content was the hard part. The mix of drama and mystery keep us looking today

And there’s more to Gerstl’s back story.  At 23 he was hired by the composer Arnold Schönberg to teachSchönberg and his wife, Mathilde, how to paint. Schönberg, who struggled to find an audience for his atonal music, thought that painting would be a way for to make a living. It wouldn’t be. Gerstl and Mathilde, who was six years older, began an affair.

The Gerstl-Schönberg encounters led to portraits of Arnold and Mathilde, and to Schönberg family portraits, and to thick applications of paint on the canvas that blur faces as they compose them, making you think of what Abstract Expressionist masters like Willem de Kooning would do decades later.

In Seated Female Nude, a portrait of Mathilde that Gerstl painted in 1906—a year before Pablo Picasso completed Les Demoiselles d’Avignon—the faint, nearly indiscernible features of Mathilde’s face have a deadpan expression, and the outline of her body suggest an emptiness inside. Some say the painting is unfinished, and that Gerstl was waiting for it to dry before adding new layers of paint. We don’t know, but Gerstl’s vision of his lover here reminds you of figures by the American artist David Park from the 1950s. If Gerstl’s self-portraits astound you with their defining elements, this picture strikes you with its chilling emptiness.

The show leaves you with another haunting figure, a self-portrait of Gerstl standing nude (with a full head of hair) that is likely the last work he painted before his suicide. In the full-frontal pose, probably painted in front of a mirror in his brother’s bedroom, Gerstl is defying the father who would order it removed. Could it also be a signal to Schönberg, whose wife had returned to her husband by then? The defiant Gerstl would die with those secrets eight weeks later.

Yet there’s something else, a portrait of Gerstl by another artist, the American William Clarke Rice, which shows the young painter in 1907 against a standard brown background. Gerstl’s hair is short, as inSelf-Portrait Laughing, but he’s groomed, and he’s wearing a suit and bow-tie, like an aspiring accountant. The portrait is correct, yet the exhibition shows you the richness and darkness that it conceals. 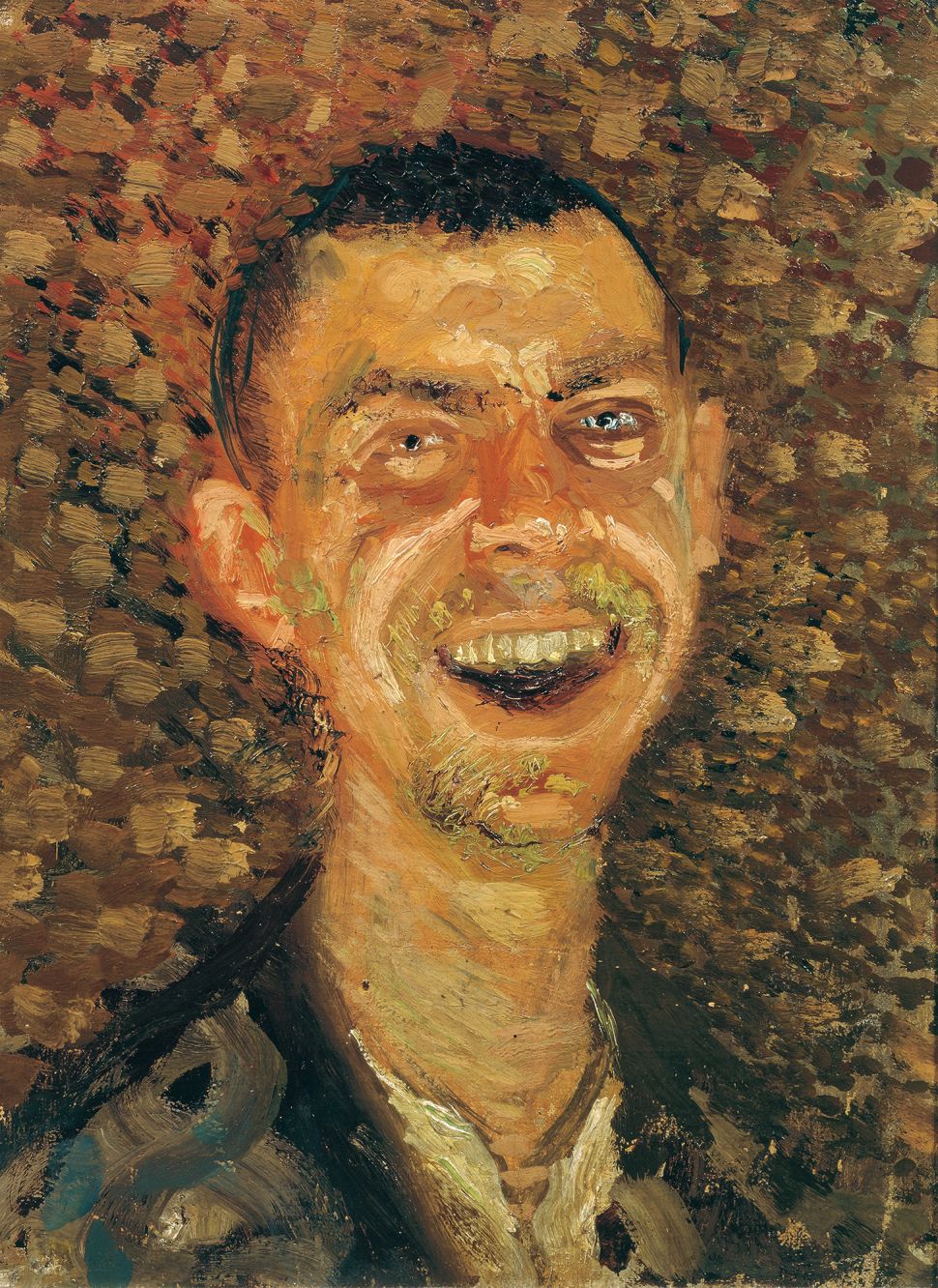