Advocates for people of color and immigrants protesting police brutality showed up to the NYPD’s annual “National Night Out Against Crime” to outline their “vision of safety” for their communities, which they said should center on community investments rather than a heavy police presence.

“Night Out For Safety and Liberation,” established by the Ella Baker Center for Human Rights, an Oakland, Calif.-based organization that advocates for racial and economic justice for low-income individuals and people of color, is an annual event that occurs on the first Tuesday of August.

The New York Worker Center Federation, a multiracial movement of workers and immigrants organizing across sectors and issues, has been running the New York City event for three years. This year, the event took place in Brook Park in the South Bronx.

While the NYPD’s “National Night Out Against Crime” unites local precincts and residents every Aug. 1, the activists believe safety comes from having basic needs met, including quality schools, clean and affordable housing.

Basma Eid, lead trainer for Enlace — part of Workers Center Federation — said they are shifting the conversation about “what safety is, what safety looks like.”

“It’s always imposed on us and the police, they talk about building partnerships with the community but at the same time, they are the ones who are policing us, that are putting our communities behind bars, that are enforcing a racialized criminal justice system,” Eid said following the event. “And so for us, we want them to understand that we don’t want more cops in our neighborhoods.”

She called for “better investments” in education, housing and healthcare — which she said were lacking in the South Bronx and other neighborhoods.

After icebreakers in the park, they marched to the “National Night Out” event hosted by the 40th precinct on Brook Avenue between East 137th and East 138th streets.

They yelled, “Black lives! Matter!,” “Whose streets? Our streets!,” “Our city! Our fight!,” “Escucha, escucha! Estamos en la lucha!” (“Listen, listen! We are in the struggle!) and “El pueblo, unido, jamás será vencido!” (“A united people and community shall never be defeated!”).

When they arrived, police officers blocked them from entering until their boss informed them they had to let them in. As they marched and chanted, attendees looked on with curiosity. The music was turned up to drown out the marchers, but they still charged ahead even as their chants became inaudible.

After they crashed the NYPD event, they marched back to the park.

One of the marchers yelled, “Who killed Eric Garner?,” “Who killed Ramarley Graham?” and “Who killed Sandra Bland?” — referring to the deaths of black individuals at the hands of the police on Staten Island, in the Bronx and in Waller County, Texas, respectively. Each time, the marchers responded, “The police!” and “The NYPD!”

Albert Saint Jean, a New York City organizer for the Black Alliance for Just Immigration — who is from Haiti and resides in Brooklyn — blasted the controversial “broken windows” policing method that targets smaller crimes to stave off larger ones. And he lamented gentrification “creeping into our neighborhoods,” with white people “free to do as they please.”

“We ourselves always have to question our own humanity and our own rights to be places,” Saint Jean said. “It’s to the point where they harass us so much that we even feel like we did something wrong. We walk around already feeling guilty having done nothing.” 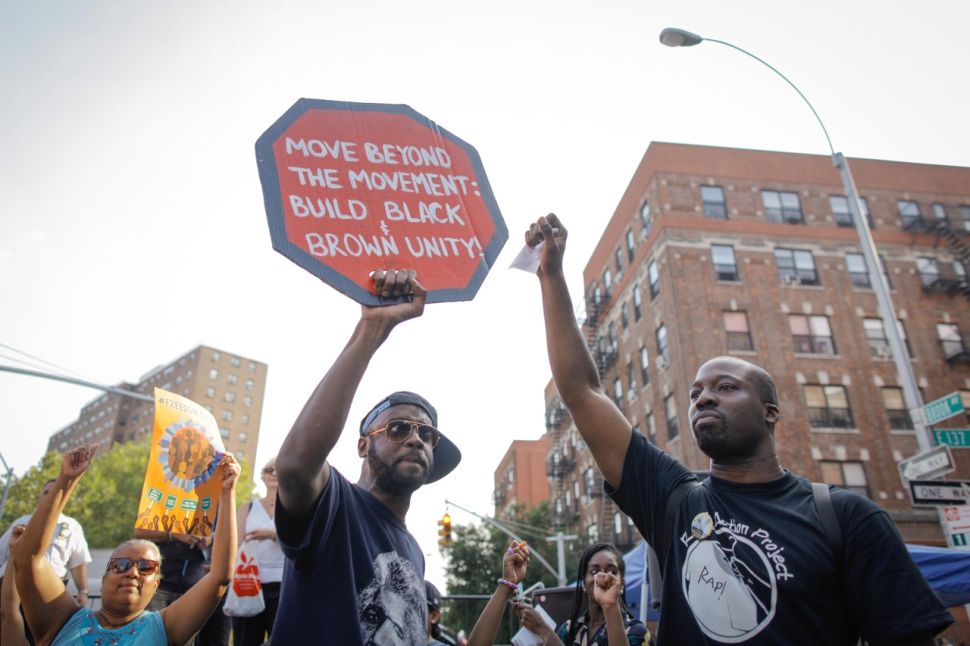