Lipstick, whether it’s in fire engine red or barely-there beige, has always been more than just a pretty type of face paint. Take, for example, the Lipstick Effect. This economic theory states that during economic crises, consumers are more likely to buy lower priced luxury goods (one tube of maquillage) rather than high ticket ones (a leather handbag). This theory is being put into practice right now in the U.K., with Brexit looming large over citizens. According to the John Lewis department store, lipstick sales have risen 31 percent from April to June 2017 versus the same period last year. A similar uptick in cosmetics sales was seen in the months following 9/11.

So it makes sense that Olivier Rousteing is positioning his first range of Balmain lipsticks, made in collaboration with L’Oréal Paris, as more than just a delightful item to add to your makeup collection.

“I create a world that is expensive because with Balmain it’s luxury, but if you think of my ideas and ideologies it’s more than a price on the clothes. The lipsticks are about bringing that universe to people, it’s important,” he told Vogue UK, citing an affordable way to buy into his Kardashian-splashed ethos. While a Balmain dress might fetch $4,565 on Net-A-Porter, one of these lavish lipstick tubes will go for just $14 a pop, when they hit stores in the beginning of September. But pulling one of these 12 designer-approved shades out of your purse and applying it in the bathroom mirror at your office, your local lunch spot, airport bathroom or even a friends home speaks volumes. It says “I know about fashion” and “I like luxury, at any price point.”

Finances aside, the collaborative range dips a toe into yet another hot topic: diversity. According to a press release, these Color Riche formulas were “designed for every complexion.” To prove this point, Rousteing tapped 12 girls of different backgrounds and skin tones to model the hues, which range from ocean blue and royal purple to spiced orange and ruby red. There’s Cindy Bruna, a French model with an Italian father and a Congolese mother, Soo Joo Park, who hails from South Korea, Grace Bol from South Sudan, Neelam Gill, whose Instagram description reads “British Indian Model,” and Dominican stunner, Yasunny Brito.

In the campaign, the 12 models, all clad in a clash of Balmain clothing, strut on a rooftop. The ad’s font reads: “United, We Are Invincible.” In the weeks following the Charlottesville attack and a president that failed to denounce racism, it’s a rather fitting statement to make. And it goes to prove that both Balmain and L’Oréal are aware that they’re selling more than just lipstick here.

Although Rousteing is well-known as fashion’s selfie king—a title he’s proudly carried for years—he’s also aware that fashion needs to delve far beyond the typical notion of beauty. He’s been a longtime champion of diversity, first as a black child adopted by white parents at the age of one and then as the first black designer to helm a major luxury fashion house.

“Sometimes the fashion crowd think[s] they’re really modern and avant-garde, but I think the system can also be quite old fashioned,” he wrote as a guest editor for CNN. “I’m proud today to speak about a world where you walk down the street and see so much diversity, different people, different colors, different races. It’s what I want to try to express in my catwalk, in my casting.”

Now, if only the leader of our country would embrace the same notion. 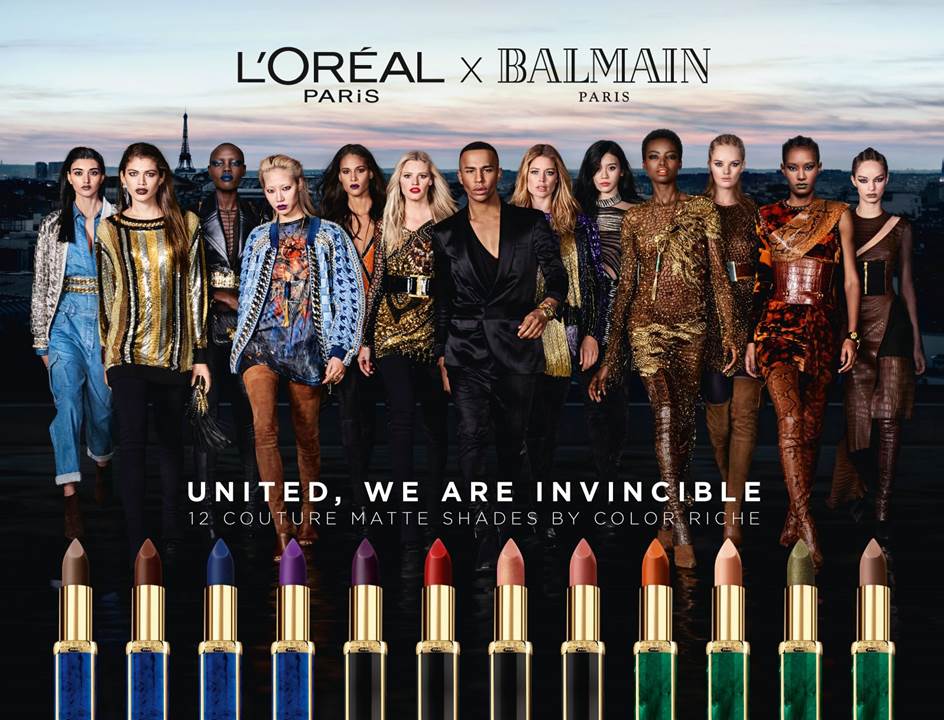