BBC America’s Orphan Black, which just wrapped up at the end of five seasons, centers around the story of a vast number of clones spread out across the globe. But back in the first season we started with just one protagonist, and if you were to tell me that Sarah Manning wore a little black romper, hoodie and leather jacket before she could even talk or walk, I would believe you. Of the many clones that the talented Tatiana Maslany embodies over the course of this show, no one sticks to her style guns more than Sarah. Her nearly all-black signature look is a constant throughout its seasons, as are all the very different sartorial leanings of each character, which often help to differentiate the clones so there’s no mistaking one for another (unless, of course, they are purposely acting in a misleading manner.)

But the costuming choices help emphasize another important thread that runs through Orphan Black: that environment has as much of an impact on preferences and predilections as one’s genetic makeup, and that identical twins raised in different surroundings will all turn out vastly different. The nearest Sarah had to a style twin is not her actual twin; instead her foster brother Felix is someone with whom she could easily share a closet. Both have a penchant for edgy clothing choices and yet, in the finale, Sarah is stuck in a sartorial rut even after the big bad had been vanquished. There’s no one left to fight and Sarah still wears her leather-like armor.

The season finale of Orphan Black took care of the villains in the first fifteen minutes and focused mostly on the after effects of living through this saga. What really matters in this story is not the sprawling conspiracy behind creating the clones, but the women—and their allies—who are so much more than just a science experiment.

When we first meet Sarah in the pilot, she’s returning home for the first time in a year to get her daughter back. In season five, she now has her daughter, but she still doesn’t possess the ability to stand still. What the finale does is focus on Sarah’s state of mind without the anchor of her foster mother Mrs. S., the woman who has always challenged her and who ultimately sacrificed herself for the clone saving cause.

Black and white play such a strong part in the costume palette of the show, with Sarah on one end and twin Helena on the other. This was established in the first season by costume designer Laurie Drew, and continued over the next four years with Debra Hanson at the helm. But the black/white binary isn’t just an easy way of indicating good versus evil. Both Sarah and Helena had to do some bad things in order to survive.

As the only twins created by the British cloning operation known in the show as LEDA, it makes sense that these two characters are presented as opposites, but with complementary attributes. Helena’s wild, chemically bleached hair immediately sets her apart from her twin, and for all of Sarah’s black leather and skinny jeans, Helena’s hand-me-down outfits have repeatedly included white clothing. An infamous example is the long-sleeve wedding dress she was forced to wear by the Prolethean religious extremists at the start of the second season. It didn’t stay white for too long and ended up drenched in blood.

These twins had a tumultuous start to their relationship and a violent confrontation in the season one finale lead Sarah to believe she had killed Helena. Their reunion the following season is fraught for a number of reasons, not least of all because Sarah has already been tied up by another enemy. Completely at the mercy of the blood-soaked bride, instead of harming her, Helena leans in for an embrace that creates a yin and yang-like image as they slot together—white, black, and blood forming a striking image.

Helena often wears bright clothes over the run of the show—the result of a hand-me-down wardrobe courtesy of characters Felix and Alison. It isn’t until Helena has been stripped down to just a hospital gown in the penultimate episode of the series that the dark versus light costume visual reemerges and reunites Sarah with Helena at a pivotal moment.

This time Sarah is in charge, helping her sister give birth to twins in the most awful of circumstances; in a dirty basement while they are being hunted. In fact, everyone in the first part of the finale is wearing black and white; Virginia is clad in a bloody lab coat, Westmoreland wears his traditional vest, shirt and tie and Art is in a flak jacket and white tee. There’s simplicity to the costume design here, and after the bad guys have been dispatched it is left to Art and Sarah to deliver Helena’s twins. Once again they fit together like two perfect halves, echoing the scene from season two.

Orphan Black is a Winter show—the skies are gray and characters wear a lot of coats. This is one of the reasons why the sun-drenched second half of the finale stands out, there is suddenly so much color, and only Sarah sticks to her monochrome palette. Even Helena’s babies have been given bold, temporary color-coded names and they’re wearing the socks to match.

The baby shower is something Helena dreamed of while she was in captivity at the start of season three. The real thing is even better, despite Sarah’s gloominess. Outside, Felix meets with the only core clone who is not invited; Rachel has flitted between white and black expensive clothes to match her lofty corporate job. Notably, she is the only clone who has maintained a strong self-awareness throughout the show. This was often seen as an advantage, but now, as she tells Felix, she is lacking in an identity because she is in hiding and can’t use her name. For all her superiority in knowing her origin, she is now alone and without her fortune.

During the party scene, there are numerous patterns and prints on display. Cosima is in florals, Scott put a bird on it and Felix has embraced a botanical theme. There’s also a fair amount of purple and orange in honor of the new arrivals. But Sarah’s not going to start dressing another way just because the Dyad drama is over. She stays inside at the party, only venturing outside when night falls and she can be alone. But solitude is not an option; out in the garden these women come together to fight for each other once again. But this time it’s against inner-demons and fear of failure. Sarah finally realizes that she isn’t the massive mess she thought she was. Or at least she isn’t alone in feeling afraid of failing. She needs to lean on her sestras and not push them away.

A final sequence shows each of the four clones out in the world. Sarah is heading out to Shite Beach wearing a sky blue tank and denim shorts looking content with Felix—also in a colorful coral tank—and Kira. This isn’t to say Sarah has ditched the hoodie and leather jacket entirely, but she is embracing the summer and perhaps the idea of settling down. She can finally stop running. 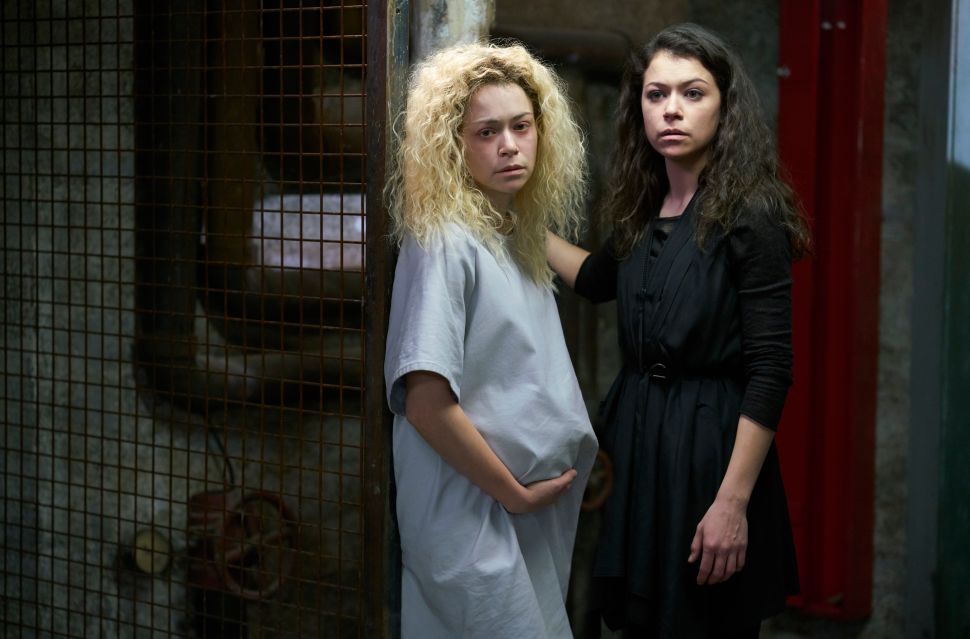