Since this is likely the last opportunity we will have to do so, let’s pause once more to appreciate the breathtaking virtuosity of Tatiana Maslany’s performance on this show. She’s always remarkable, but it’s never more obvious than when one of the clones she plays masquerades as one of the others, a feat she accomplishes yet again in this penultimate episode.

This time around it’s Sarah, in a blond wig and eyepatch, pretending to be Rachel. A lesser actress would likely have split the difference between their two personas, settling on an accent halfway between Rachel’s posh purr and Sarah’s cockney snarl. Maslany doesn’t do anything like that. She’s constantly in character as Sarah, changing from second to second with the smallest of shifts as she tries to embody Rachel, over-emphasizing the haughtiness of the accent on one word and then overcorrecting back to her own accent on the next.

It’s not even the best or most interesting of these clone-playing-a-clone scenes, and yet it’s still a mini tour de force. To Sarah’s mind, Rachel is peremptory, shameless, and obsessed with power. And so she opens with, “You’re sitting in my chair.” It’s excellent writing, but Maslany elevates it, letting Rachel’s eyes momentarily flash with the fear that this might be going too far, then replacing it with a defiant self-protectiveness she feels is more appropriate to Rachel.

This tug of war continues for a thrilling couple of minutes, until she finally overplays her hand and her ruse is seen through. Every moment of it is a master class in acting and ample proof that Maslany’s performance here is so much more than a gimmick—and please give her all the Emmys forever, thank you!

Sarah is pretending to be Rachel in an attempt to find Helena, who was kidnapped last episode by the swiftly imploding Neolution. They want to steal her unborn twins and use their unique genome to create a fountain of youth.

In keeping with the “farewell tour” pattern set up for this season, in which each clone gets her own in-depth episode, this one is primarily focused on Helena, telling us her backstory in a series of flashbacks she has while evil Dr. Coady sedates her and prepares to deliver her children.

It’s great to learn how Helena became the terrifying wing-nut we’ve come to know and love, from her torture by nuns for being a gluttonous and inquisitive child, to her adoption and indoctrination by Tomas and the Proletheans. We get to see how Tomas took an abused child and reshaped her into this murder-angel, and how that twisted up an already damaged psyche. And we learn how she came by her love of 1960s bubblegum pop. (This season has been full of amazing musical cues, but none has been quite so endearing as Helena clumsily singing over the Troggs’ “With a Girl Like You” as the credits roll, a callback to her hilariously exasperating Sarah with a rendition of “Sugar Sugar” in season 2.)

But a lot about these flashbacks is completely mystifying, starting with the inexplicable fact that they did not cast Cynthia Galant, who plays Charlotte, as the young Helena. It’s been firmly established that all of the clones looked like her as children. Galant played young Rachel in flashbacks two weeks ago. And last week the show went out of its way to have Kira and Charlotte meet so that Kira could point out that Charlotte looked like her mom must have when she was her age. Maybe they figured they needed an actress who was fluent in Ukranian? But the casting remains completely mystifying, and it took me right out of these scenes.

Also odd: These earliest flashbacks tell us that Helena’s signature look, the wild mane of blonde hair and red-rimmed eyes, was the result of a punishment doled out by a nun she accidentally spied masturbating. The nun forced her head in a bucket and poured a chemical over it, presumably some kind of bleach. But it’s hard to imagine that this damage was permanent. Hair grows out; irritated eyes heal. It appears that somehow Helena adopted the symbols of her oppression as part of her personal style, bleaching her own hair and wearing red eyeshadow. It’s strange to just leave this implied, though, when we get an explicit scene of much more extreme self-harm when she starts carving wings into her back with a razor.

Meanwhile, Sarah and her family are mourning the untimely demise of Mrs. S.  After a touching service (someone beautifully sings “The Parting Glass,” Felix reads a letter Mrs. S cribbed from Henry Scott Holland’s “Death Is Nothing at All,” Kira sobs and places a single rose on the grave), the reception back at the house is interrupted by the entrance of the mute Sister Irina. She’s got Helena’s memoir, which tells them what they need to know. Time to spring into action and save their sister.

Not-P.T. Westmoreland is busy trying not to die while tying up loose ends, shooting himself up with uppers and demanding that Coady induce labor right away so he can drink the babies’ cord blood and live forever or something ghoulish like that. He also orders her to murder her last surviving son, Mark, and sends Frontenac to go kill the remaining Neolution board members.

Luckily, Art and Felix find him just as he’s about to kill Hashim al-Khatib. Unluckily, Art shoots Frontenac instead, killing their only lead as to where Helena is. Khatib doesn’t know where Not-Westmoreland is, but suggests that what he really wants is Rachel. And that’s where the idea to use Sarah-playing-Rachel comes in. Khatib calls Neolution and tells them he’ll trade Rachel for his life, while Art puts a tracker on Detective Engers’ car.

They track Sarah-as-Rachel to the new Neo base, which is right back at the Dyad Institute, in an abandoned wing. Since Scott basically lived there for years and Hell Wizard is a security expert, the two of them manage to scam their way in and let Art inside.

Helena wakes up and manages to get her hands on a pair of surgical scissors. But they are useless on her restraints, and finally she settles on suicide instead. Neolution can never be allowed to warp and abuse her twins as she was warped and abused; she’d rather kill herself and them with her. So she turns the scissors and jams them deep into her own wrist. It’s devastating, but it also feels right: This is exactly what Helena would do in this situation.

At this very moment, though, Not-Westmoreland is unmasking Sarah, who goes after him with a knife. Coady bursts in to cry out, don’t kill her, we need her blood or Helena and the babies will die. So Sarah goes to transfuse her blood into Helena, who wakes up just before Coady is going to do an emergency C-section. While they wait for labor to take its course instead, Art enters the building and an alarm goes off. Detective Engers goes to check it out, giving Helena a chance to go all rage-murder demon on Coady. She does not hold back, smashing her head repeatedly into the surgical tray until she dies. And then Helena and Rachel escape their restraints and start to head out—just as Helena’s breaks.

Overall, an episode that did everything that it had to do to set us up for the final episode of the series: mourn Siobhan, give us a deep focus on Helena and stage her daring escape, but it felt rather perfunctory and weak. There was just too much deus ex machine involved. Sarah should have been killed, and was only saved because Helena needed blood. Helena never would have been able to kill Coady if Art hadn’t set off the alarm at that moment. Sure, their plan was born of desperation rather than careful planning, but it still feels cheap when multiple coincidences are all that save our protagonists from certain death.

But now the twins are on their way to being born, and it seems they’ll be the focus of the last episode of the series, looking back on what’s come before, and ushering them into a bright and super-mutant-healing-powered future. 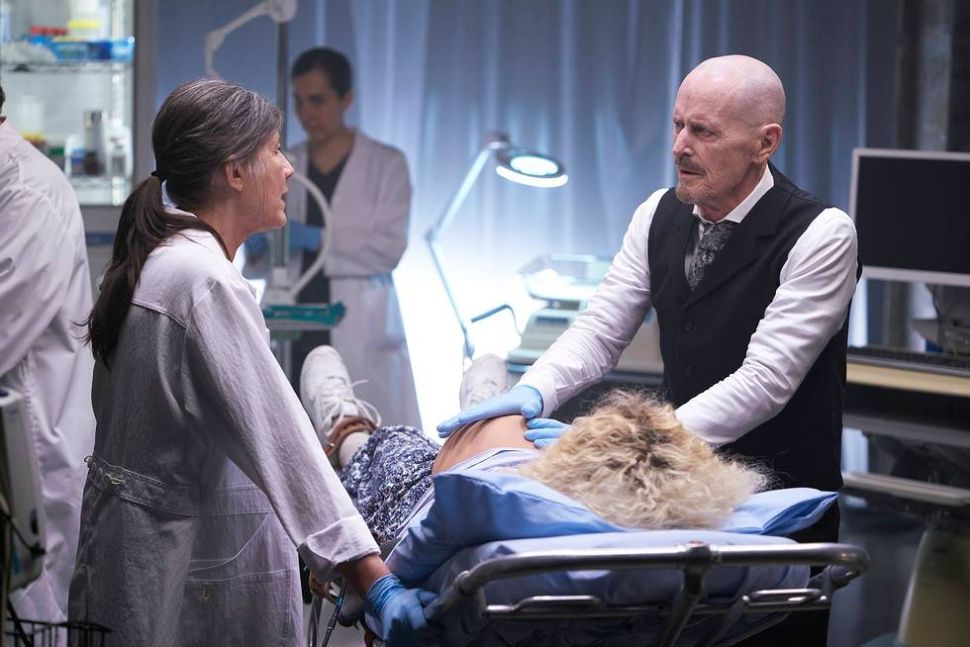