Near Mint, is our weekly comics column where media guru Johnnie Martin discusses all the KAPOW! that’s fit to print. This week: What’s behind the steady increase in strange unions between different worlds?

Wonder Woman meets the Tasmanian Devil?  Zorro fighting alongside Django? If you’ve frequented comic shops over the last several years, you’ve probably noticed an uptick in bizarre comics crossovers. Crossovers have always existed in comics—the 1990s is famous for the DC vs. Marvel event that no-one thought possible. But while DC and Marvel are different, that book makes some sense. Two universes of superheroes go together on paper more seamlessly than say, a group of homicidal maniacs and a 1960s zoological rock band; That happened last year, in the form of a  Suicide Squad/Banana Splits one shot. Largely, these crossovers are the endpoint of a less diversified corporate entertainment landscape where big business has bought out or merged with lesser ventures. As smaller fish like Marvel and DC have gotten gobbled up by whoppers like Disney and Warner Bros., the flagship characters associated with those companies have gotten the chance to mingle.

The culprit behind the majority of these wacko unions has been DC Comics. This past June DC launched six one-shots where heroes from the Justice League Universe fraternized with Looney Tunes. Included: the Batman/Elmer Fudd Special, aptly titled Pway For Me.  In Pway For Me the Merrie Melodies cast is reimagined as denizens of the Gotham city underworld: Fudd is a lispy hitman with orders to assassinate Bugs, rendered by artist Lee Weeks as a sad, buck toothed, carrot chewing human. It’s Batman’s job to stop Fudd, and violence ensues. What is oddly satisfying in the best of these books is the way that things are often played very straight faced. While Martian Manhunter meeting Marvin the Martian seems like an obvious union, writer Steve Orlando has Manhunter’s joy at discovering a fellow martian  believably crushed by realizations that Marvin’s destructive tendencies make him a very different alien. DC Looney Tunes crossovers were made possible when Warner Bros. merged with Time Inc. in 1989. Any Gen-Xer who grew up with a VHS copy of Tim Burton’s 1989 Batman remembers Bugs Bunny appearing in front of the tower at the start of the tape. Looney Tunes and DC heroes have actually united before, including in a 2000 Superman & Bugs Bunny four parter.

The Hanna Barbera pantheon also found themselves intersecting with the DC heroes this past year, in a series intended to promote DC’s new Hanna Barbera Beyond line of books. Green Lantern met Space Ghost, and the Flintstone’s town of Bedrock received a visit from time traveling super hero Booster Gold. Even some of the sans DC solo Hanna Barbera comics feel like crossovers. Like the 1990s John Goodman vehicle, the Flintstones solo comic is a treatise on the darkness of 1950’s corporate culture—it feels a lot like an episode of Madmen. A  DC backup story featuring queer fan favorite Snagglepuss recasts the snazzy pink cat as Tennessee Williams, being interrogated for his plays in a period piece hearkening back to the red scare of McCarthyism. DC accessed Hanna Barbera IP when Turner Broadcasting, the owner of the Hanna Barbera licenses, was purchased by Time Warner in 1996.

But why the uptick in weird crossovers now, over twenty years after DC acquired the rights to Looney Tunes and Hanna Barbera? The skeleton key to unlocking this mystery may be the success of crossovers in video games, as well as the related comic Sonic & Megaman: Worlds Collide. Made possible by Archie Comic’s 2011 acquisition of Capcom properties and a longstanding deal with SEGA, This 2013 crossover stars two video game icons past their prime. A speedster hedgehog and a cannon armed astro boy would not seem to match well together but shockingly, the team up ran for twelve issues, and according to writer Ian Flynn, sales were “huge.” World’s Collide was followed by another 12 part storyline,  Worlds Unite, in 2015. Worlds Unite was a full Sega Vs. Capcom moment, with appearances from characters as disparate as Street Fighter’s Ryu and the flying jester from Sega Saturn’s NiGHTS Into Dreams. From the Nintendo brawler, Super Smash Bros. to the Disney/Final Fantasy mashup Kingdom Hearts,  staggeringly successful weird crossovers are even more common in video games where mechanics can dictate the narrative. Capcom themselves have crossed over with multiple “Vs.” titles, including Marvel Vs. Capcom, Capcom Vs. SNK, and Capcom Vs. Tatsunoko. So using video game characters from a crossover heavy company in a crossover comic might have made things feel smoother than they would have using other intellectual property.

Archie Comics is also leading the charge with perhaps the strangest crossover of all; 2015’s Archie Vs. Predator. In Archie Vs. Predator, the Riverdale gang takes a trip to Colombia where Betty attracts the attention of a teenage predator alien, who follows them back to suburbia for four issues of murder and mayhem. Written by Alex de Campi, this is a real horror comic drawn in the traditional Archie style but with an even creepier edge. Archie comics has proven time and again that it isn’t too precious with its flagship universe. Everyone from Sarah Palin to Hikaru Sulu has popped up in the pages. Archie even teamed up with Marvel’s The Punisher for a single issue in 1994.

Which leads to the question, where is Marvel in all of this zany corporate hijinx? Although known for doing celebrity crossovers (The Avengers once went on Letterman, Spider-Man has met Barack Obama) the house of ideas has stayed mostly out of the weird crossover game in recent years. This is particularly irksome considering Disney’s acquisition of Marvel in 2006. You’d think we’d have the Punisher meeting Bambi by now. But while the Disneyland Tower of Terror is now themed to Guardians of the Galaxy, thus far the closest we’ve come to a comic book alliance is a collection of Marvel limited series based on Disneyland attractions. I don’t know about you, but  I wasn’t exactly dying for four issue arcs inspired by the Enchanted Tiki Room or Big Thunder Mountain Railroad.  Maybe it has something to do with Marvel being considered the more realistic of the big two comics publishers? Another infuriating cross-over was IDW’s  X-Files: Conspiracy, which saw the Teenage Mutant Ninja Turtles, the Crow, the Ghostbusters, and a gaggle of Transformers appearing in the X-Files universe. X-Files: Conspiracy takes as its premise that a disease from the future will destroy the human race unless several urban legends are investigated (the cure involves ninja turtle blood etc.) Sounds great right?  The problem is that most of the work is left to X-Files hacker crew the Lone Gunmen, and you never get to see panels where Fox Mulder talks to Raphael or Leonardo. So frustrating.

Honorable mentions include some DC Comics joint ventures with Boom! Studios, including between Green Lantern and Planet of the Apes, where ape protagonist Cornelius get’s a green power ring. One from the vault is the 1998 novel Planet X, which unites the X-Men with the Next Generation Star Trek cast. Wolverine and Worf share a mutual love of combat, and Picard and Storm share a mutual love for each other. The novel also comments on Picard and Xavier’s similar appearance, shortly before Patrick Stewart was cast in the Professor X role. This was made possible thanks to a deal that licensed Paramount properties to Marvel—a deal which lasted only two years, allegedly thanks to corporate in-fighting.

Writing about all these different universes is starting to make my head spin. Although I’d like to think these crossovers can happen because corporations set aside their differences to tell great stories, they’re always the result of companies buying each other out, paying up, and utilizing fading properties. 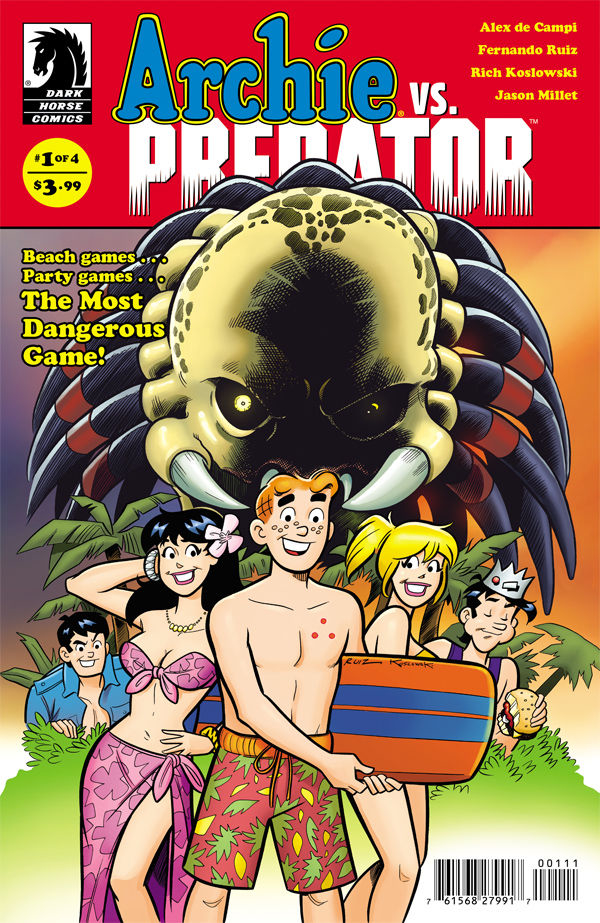