Russia’s Foreign Ministry made it clear that Russia would go the whole nine yards to inflict maximum damage to Poland’s reputation over the country’s recent “decommunization” law, which aims to dismantle Soviet monuments.

According to estimates from the Institute of the National Remembrance of Poland, about 230 out of 469 Soviet monuments in the country are going to be demolished within 12 months.

Polish Parliament passed the law this year, on June 22, which is Russia’s National Day of Remembrance and Sorrow. It was on this date in 1941 that Hitler sent his army into Soviet territory. As a result, the day is considered to be the most solemn and tragic in Russia’s history. Russia reasonably interpreted the date of the law’s passing as a purposely intended insult.

On July 17, Polish President Andrzej Duda signed the “decommunization” law. It will take effect in October.

In an interview to the Russian Kommersant newspaper, Polish Foreign Minister Witold Waszczykowski said, “If these monuments [to the Soviet soldiers] are in the cemetery, they are under protection [by Polish and international law]. If not, why should we appreciate them? The Soviet Union contributed to the outbreak of the World War II by signing the Molotov-Ribbentrop Pact and by attacking us in September 1939 from the east.”

Deputy to Russian Parliament from the Communist Party Nikolai Kharitonov proposed to break off diplomatic relations with Poland and to recall the Russian ambassador. He said, “We need to drive away the Polish ambassador and shut off all the trade with Poland.”

“I will support any sanctions that are offered,” said Vladimir Dzhabarov, first deputy chairman of the Committee for Foreign Affairs of the Upper Chamber of the Parliament.

In 2016, Poland’s share in Russia’s international trade was about 3.2 percent, amounting to approximately $9.1 billion. Poland is Russia’s 11th most important trade partner.

All Polish politicians who took part in drafting and passing the law will be banned from Russia.

Russia’s Ministry of Defense immediately reacted by releasing newly declassified documents from the liberation of Poland from the Nazis by the Soviet Army in 1944.

The Upper Chamber of the Russian Parliament called on Russian President Vladimir Putin to react on the new Polish law. So far, Putin has been silent, but there is no doubt he will have a reaction. In 2009, standing beside Polish Prime Minister Donald Tusk, Putin unceremoniously shrugged off Tusk’s efforts to blame the USSR for causing World War 11. Putin said, “Only for the liberation of the town of Gdansk, more than 53,000 soldiers and officers of the Red Army gave their lives.”

It was not an accident that Putin chose Gdansk—formerly the German city Danzig—as an example of a site liberated from the Nazis.

Putin continued, “There are more than 600,000 of my countrymen buried in Polish ground that helped to achieve victory over Nazism.”

Konstantin Kosachiov, the head of the Committee for Foreign Affairs of the Upper Chamber of Russian Parliament, supports “mirror actions” against the Poles. For example, he said Russia could stop taking care of Polish memorials in Russia as soon as the Polish law takes effect.

One such memorial is the Katyn Memorial, which is not far from the city of Smolensk, a sacred place for Poland. In 1940, Stalin’s NKVD executed around 22,000 Polish officers, priests and intellectuals. Four and a half thousand thousand Polish prisoners were shot in the forest alone.

During World War II, when the Nazi army advanced deep into Russia, the Nazis found the mass graves of the Polish victims. They used the gruesome discovery for their anti-Soviet propaganda machine.

Adding further tragedy to the site, on April 10, 2010, the plane of Polish President Lech Kaczynski, who flew to Katyn to commemorate the 70th anniversary of the massacre, crashed near the Katyn forest, killing the 96 people onboard—88 passengers and eight crew members.

Kosachiov’s suggestion that the site of these misfortunes could be added to the general list of Polish memorial places indicates Russia will take little care in distinguishing between Polish memorials.

In fact, Russia’s answer for the coming law on the demolition of the monuments to the Soviet soldiers in Poland had been prepared well in advance.

In April, Warsaw made known to Moscow its displeasure with the proposal of a new addition to the Katyn Memorial Complex.

Newly erected information stands, in front of the Katyn Museum Complex, dedicated to the “tragic episodes of the Soviet-Polish war of 1919-21,” became the harbingers of the coming international confrontation.

During this inglorious war, which was started by the Bolsheviks to spread communism to Poland, Soviet Russia was devastatingly defeated by the Polish army. Thousands of Red Army POWs were held in Polish concentration camps in inhumane conditions with no food, clothes or shelter. Tuchola concentration camp at the time was called a death camp. Twenty-two-thousand Red Army soldiers starved to death there.

“The Ministry of Foreign Affairs took with great concern and disappointment the placement by the Russian side of the massifs in the territory of the Polish military cemetery in the Katyn, containing false information about the Bolshevik prisoners in 1919-1921 who died in captivity in Poland,” the Polish Foreign Ministry said.

The Polish Foreign Ministry claimed that the displayed information “exceeded the factual data several times” and “the cause of deaths of the majority of the prisoners was due to the conditions in the camps,” which were the result of the “dramatic economic situation” in Poland and “effected both the Soviet soldiers and Polish citizens.”

Mikhail Miagkov, head of the Russian Military Historical Society, said the “new and improved” museum complex devoted to the Russo-Polish relations in the 20th century will be open in December 2017. “After all,” he added, “there are discussions with regards to our Red Army men, whom the Polish authorities put in concentration camps [during the war of 1919-21]. Speaking of Katyn, we must remember that not only the Polish troops, but also Soviet citizens are buried there.”

Russian Minister for Culture Vladimir Medinsky described his perspective for the new addition to the Katyn Memorial: “There will be discussions about Poland as part of the Russian Empire, about the revolutionary movement in Poland, the Soviet-Polish war, the tragedy of tens of thousands of the Red Army soldiers who were captured in Poland and tragically killed [in Polish concentration camps], about the relationship between Poland and Soviet Russia until the outbreak of World War II.”

Polish Prime Minister Jaroslaw Gowin said, “This is an obvious provocation, an attempt to equate the situation of military conflict between the two states with the situation of genocide, the brutal massacre of thousands of Polish officers.”

Medinsky said visitors of the complex would learn about the causes and consequences of these events and be provided with different points of view on what happened there.

This is the ultimate insult and why Poles are calling for revenge.

First, some in Russia deny their country’s responsibilities for the Katyn massacre. They blame it on Hitler and insist the documents were falsified under Gorbachev rule to please anti-Stalinist forces both in Russia and abroad. During the war, Stalin accused Nazis of perpetrating the execution of the Poles at Katyn and sending a special commission led by Nikolai Burdenko to cover-up the crime. Then, some Russians insist that the Polish officers shot at Katyn by the NKVD received their rightful punishment for taking part in the subjugation of Byelorussians and Ukrainians after parts of the former Russian empire went to Poland after World War I. Others believe the Katyn massacre was Stalin’s revenge for the thousands of deaths of the Red Army POWs in Polish concentration camps

Rzeczpospolita reported, “Russian journalists have suggested that if Poland renounces its communist past [i.e. dismantles the monuments to Soviet soldiers], it must also abandon the western borders Stalin gave [to the country].”

Russia made it known that Moscow would not stop digging deep into Europe’s Pandora’s box. Russian television programs openly talk about the ungrateful Poles that, as a result of the war, received German territories, such as Pomerania, Silesia, East Prussia, cities of Danzig and Stattin, for which 600,000 Soviet soldiers paid with their lives.

All of these will be reflected in the new exhibits at the Katyn Memorial.

The Polish Institute of National Remembrance considers these acts by Russia attempts to minimize the massacre of Poles at Katyn.

Russia, on her part, made it clear that the Polish “decommunization law” will be met with Russian “devictimization” acts with regards to Poland.

Medinsky, Russia’s minister for culture, allocated 10 million rubles ($170,000) for the new expositions at the Katyn Memorial this year. 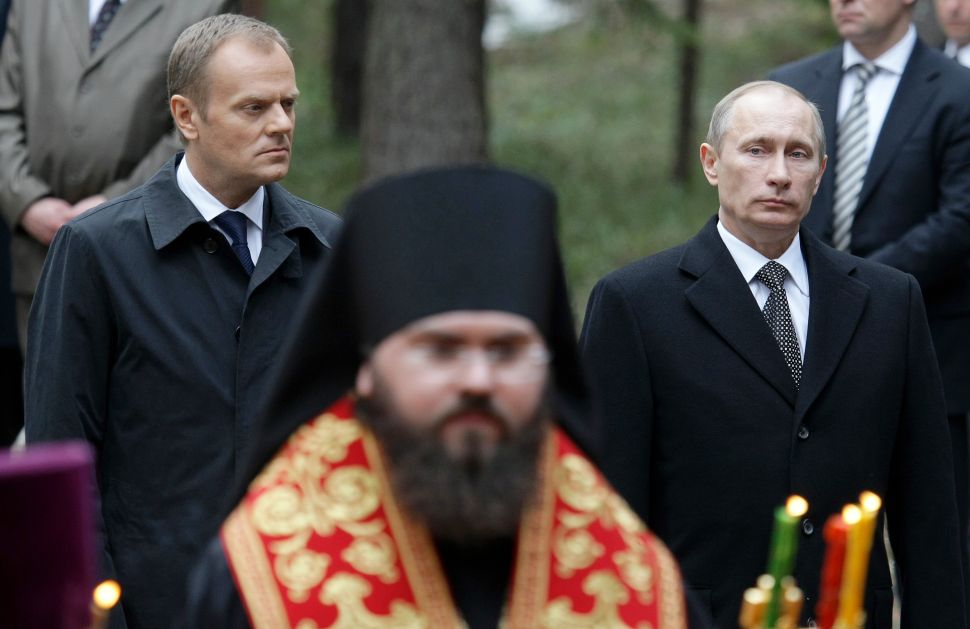