Despite having a slim edge in the 63-seat body, with 32 Democrats and 31 Republicans, one conservative Democrat, Brooklyn state Sen. Simcha Felder, caucuses with the Republicans, and the eight-member Independent Democratic Conference has been in a power-sharing agreement with the GOP leadership for nearly five years. But in an effort to resist President Trump at the state level, Democrats are pushing to assume control of the chamber and elevate Stewart-Cousins, the Democratic caucus leader, to the top job.

State Sen. Brian Benjamin, who organized the rally, reminded the crowd that Democrats technically have a majority in the Senate.

“We try to respect the rules and the way I understood the rules, madame leader, was is you have 32 Democrats and 31 Republicans, the 32 Democrats should be in charge,” Benjamin said. “And so we all are here today to say we stand with State Senator Andrea Stewart-Cousins and her leadership and she will become the first black female Senate Majority Leader. Period. End of story. End of story. We don’t need all the complications, it’s very simple.”

He also noted that Gov. Andrew Cuomo’s counsel, Alphonso David, was in attendance and that the governor has said he supports Stewart-Cousins’ leadership bid.

Cuomo and Stewart-Cousins have had a “fractious relationship” in the past, according to a recent report last week in The New York Times, and the Democratic governor has found success working with Republicans in control of the Senate over the years.

The rally comes in the wake of violence stemming from a white nationalist rally in Charlottesville, Va., over the weekend and after hedge fund manager Daniel Loeb, chairman of the Success Academy charter school board and a prominent financial backer for Cuomo and Republicans, said that Stewart-Cousins has done “more damage to people of color than anyone who has ever donned a hood.” (Loeb later apologized.) The rally was planned before Loeb’s comments and the Charlottesville violence.

“He [Benjamin] said it was because it was time that he was able to do what he came to do,” Stewart-Cousins said. “We all come into public service for a reason — and it should be public service.”

The Senate Democratic leader said that when she first moved to Westchester, she never imagined she would adapt because she grew up in the city. But she said that she eventually grew and evolved and that Westchester “embraced me.”

Clarke lamented the fact that party politics had prevented a black woman from ascending to the top Senate post.

“It is clear and has been clear to me, to my colleagues, to many New Yorkers across this state that a travesty has been allowed to fester and that is the denial — the denial of leadership that comes in the form of a woman, that comes in the body of a black woman, eminently qualified, selected by her peers to lead the majority in the state Senate of New York,” Clarke said.

Dukes issued a “clarion call to everyone who goes under the banner of the Democratic Party.”

“I’m gonna send a message today to the Democratic Party,” she said. “I join with Rev. Sharpton, they better come back to the base. There will never be a party again. African-Americans and Hispanics and Latinos and people of color has been the bandwidth of the Democratic Party.”

During a strategy session last month with Democratic state senators, Cuomo told the elected officials that Bronx Senator Jeffrey Klein, the IDC leader — understood the suburbs better than they did, the Times reported.

In response, Stewart-Cousins reportedly said Cuomo saw her “black skin” and that she is a woman “but you don’t realize I am a suburban legislator.” She also noted that she actually represents the suburbs whereas Klein does not. Both Cuomo and Stewart-Cousins dismissed that there were any tensions, and said it was a good meeting.

In response to the article, Loeb took to Facebook to say Klein has supported “economic mobility and opportunity for poor knack kids” — apparently misspelling the word “black” — and arguing that Stewart-Cousins pays “fealty to powerful union thugs and bosses” and has done “more damage to people of color tha anyone who has ever donned a hood.” He later apologized and deleted the comment.

Cuomo and Klein have blasted the comments and said they are not connected to them.

Former Assemblyman and New York County Leader Keith Wright said that they passed a resolution in support of Stewart-Cousins about three months ago. He said that they supported her when she wanted to run in 2006, noting that “some people thought she was crazy.”

Espaillat, who supported the bid of State Sen. Marisol Alcantara, an IDC member, to fill the state legislative seat he left for Congress, praised Stewart-Cousins.

“You have never heard her name being associated with a problematic situation, with something that could embarrass us all,” Espaillat said. “She has been a straightforward leader that has led us with distinction and so in the post-Trump era, there’s no wiggle room. We all, as Democrats, must come together.” 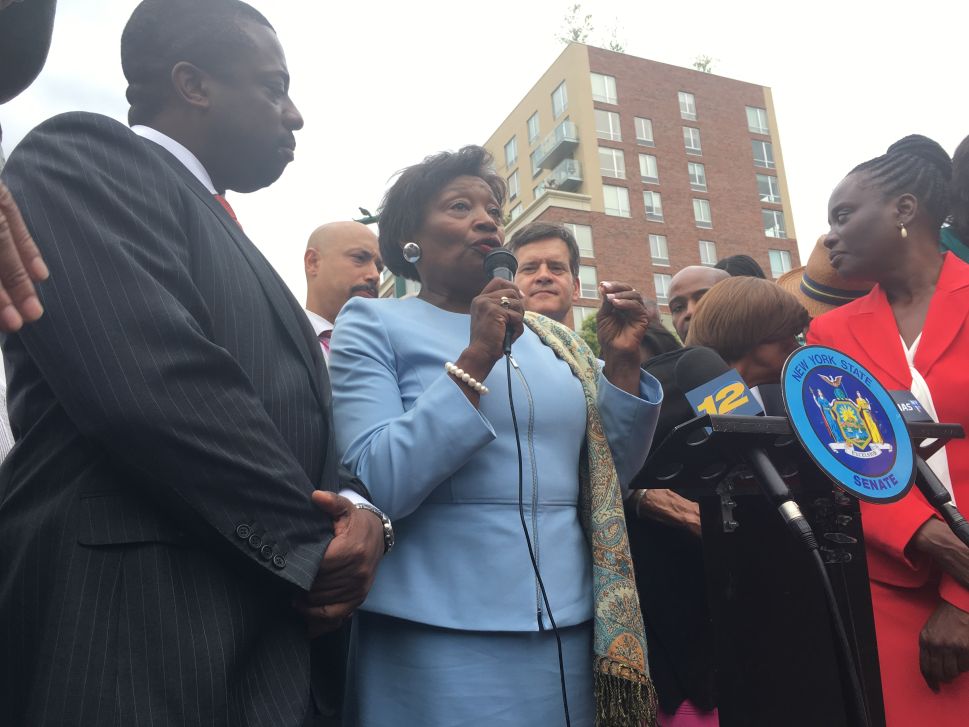