This weekend, in Monterey, California, nearly 1,000 people will take part in one of the year’s biggest car auctions held by RM Sotheby’s. And 2017 is a special year, indeed. The centerpiece of this year’s festivities is the 1956 Aston Martin DBR1, chassis no. 1, a historic racing car that is being called “the most important Aston Martin ever produced” by sale organizers, and is expected to fetch upward of $20 million.

“The DBRI absolutely epitomizes the pinnacle of racing achievement for Aston Martin,” says Stephen Archer, historian with Aston Martin, in a short film on the car and its history for Sotheby’s. “The perfection of design, by a small highly talented team, there’s nothing you can look at in the DBRI and say ‘maybe they could have done that a bit differently.’ No, it’s actually perfect, everywhere on that car.”

What makes the DBRI so unique, according to the house, is its light and fast 3-liter engine and tube spaceframe chassis. This racing car is the first of only five built between 1956 and 1958, and went on to win at the world’s most prestigious car race, 24 Hours of Le Mans, with drivers Stirling Moss and Jack Fairman in 1959. Once owned by Aston Martin Owner’s Club president John Dawnay, the car’s provenance, illustrious racing history and revolutionary design make it among the most desirable automobiles for seasoned collectors.

“[DBRI] is the epitome of the type of car we’d source for Monterey,” says Sotheby’s chief marketing officer Ian Kelleher. “It is one of—if not the most—significant Aston Martin in existence, and the cornerstone of this car’s post-war racing career with a revolutionary design.”

This is the first time the DBRI has been offered at auction, and sale organizers believe it may have the potential to break the record for the most expensive British car ever sold. The car is “on par with one of the more valuable Ferraris cars in this range,” according to Kelleher, and comes complete with a second engine which would allow the buyer to race it competitively.

The Pebble Beach Concours d’Elegance motoring week is the biggest high-end car event held each year in North America, according to Kelleher, and RM Sotheby’s August 18-19 Monterey sale is its flagship auction. Cars in the sale typically “represent the high end of spectrum,” he says, with the average lot value in excess of $1 million. 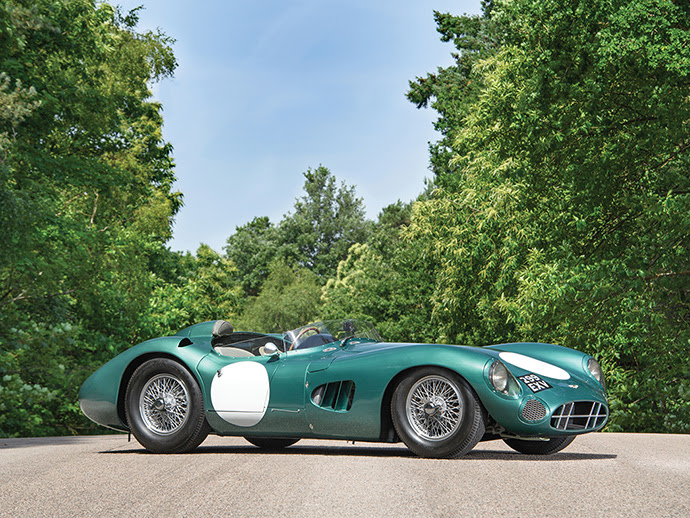