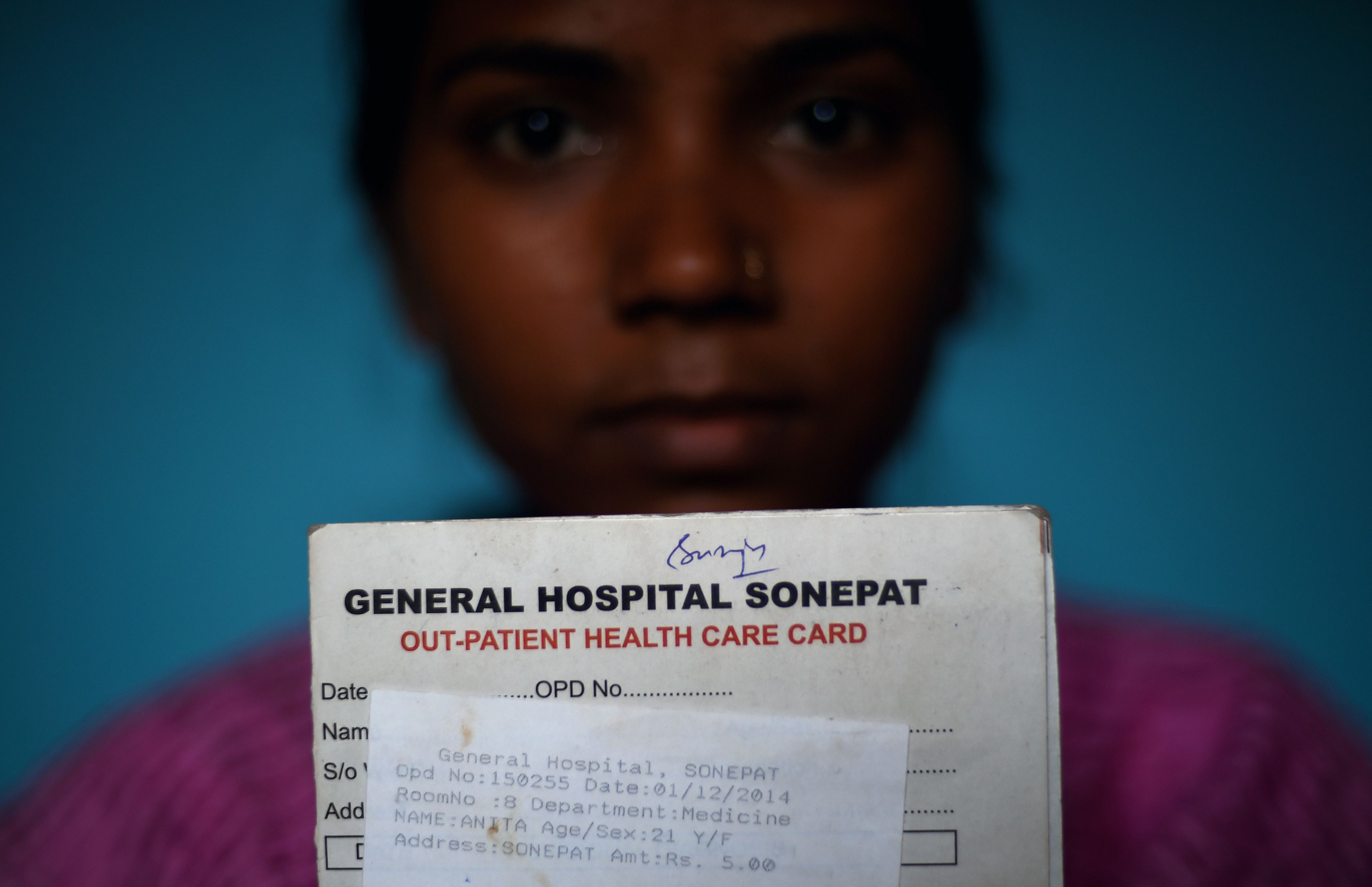 Indian tuberculosis (TB) patient Anita, 23, holds a medical card from a government hospital as she sits at her home in Sonipat. MONEY SHARMA/AFP/Getty Images

A study published recently in The Lancet has drawn the world’s attention to the specter of particularly dangerous types of tuberculosis, called multidrug-resistant and extensively drug-resistant, in four countries. The study estimated that the percentage of multidrug-resistant TB among all cases in India, which already has the highest burden of the disease of any country, is set to increase to more than 12 percent in India by 2040.

Also, TB that is extensively drug-resistant is likely to increase in India to almost 9 percent.

India had more cases of TB than any other country in 2015, with more than two million new cases recorded during the year. India also accounted for more than a quarter of the world’s TB cases and deaths that year.

As a pediatrician who has treated hundreds of TB patients in India, I can personally speak to the devastating toll among children and families. I have seen dozens of Indian children die or become permanently handicapped from TB.

In today’s globalized world, TB has the potential to spread across the globe quite easily. One merely has to study the recent case of an Indian with drug-resistant TB who traveled to the U.S. to understand how this matter is of relevance to the entire world.

Roadblocks that could prove disastrous

Drug-resistant TB has been the focus of attention for Indian health care providers and authorities in recent years and has also received widespread media coverage. There are ongoing efforts to ensure good prescribing practices and compliance to prevent development of drug resistance.

While development of effective disease treatment strategies is essential, there seems to be a lack of focus as far as very obvious and basic preventive measures are concerned. There are a few aspects that need immediate attention of the government if India is to win its war on TB. Infectious diseases can be tamed only by development and proper implementation of preventive strategies.

The developed world isolates people who are suspected of having TB until they are proven to be not contagious. India does not have a quarantine policy, even for those who have the drug-resistant form and are highly contagious. Treating physicians recognize the importance of quarantine but are not able to recommend isolation due to the lack of a directive in the national TB policy.

Isolation of patients until they are no longer contagious raises philosophical and ethical issues. A governmental directive and concerted efforts to isolate a large number of patients will no doubt be met with resistance by advocacy groups, and for good reason.

However, allowing contagious TB patients to move around in the community or travel freely will ensure that India will probably never put an end to TB. A reasonable compromise would be to provide enough facilities so that isolated patients’ rights are minimally infringed upon. At the least, a public conversation regarding this matter needs to start.

N-95 masks, sometimes called respirators, are more effective at preventing TB than the ordinary surgical masks or no masks at all. Specialized training is required to use the masks correctly. They are disposable, cannot be reused and are more expensive than the surgical masks.

However, the cost is likely minuscule if one looks at the loss of productivity of those with TB as well as the financial burden of their treatment. The Indian government has mandated TB hospitals to use these masks. However, this directive is often not followed, possibly due to lack of funds, callous attitudes or even corruption.

There can be no compromise as far as the diligent use of N-95 masks is concerned. Health care workers who take care of patients with TB themselves often fall prey to the disease and become transmitters. During my three years treating children with TB in an Indian hospital, three of my colleagues acquired the disease, including one that spread to the brain and another one with the resistant form.

Anyone who is infected with TB but does not have the disease is classified as having latent TB. Typically, latent TB is characterized by a positive reaction to a tuberculin skin test called Mantoux, or a positive blood test known as Interferon Gamma Release Assay.

The person with latent TB is not contagious, has a normal chest X-ray and no clinical manifestations. At least one in three Indians has latent TB.

In most of the developed world, latent TB is an indication to start treatment. This treatment is shorter than the one for the disease and is found to be effective at decreasing the possibility of progression from infection to disease. In India, like the rest of the developing world, treatment is usually not offered for latent TB.

The World Health Organization for the first time released guidelines in 2014 for treatment of latent TB including in the developing world. However, they are not definitive. In any case, India probably cannot blindly follow WHO guidelines, since local conditions have to be taken into account. India cannot use protocols followed by the developed world, either, because of the high number of those infected and drug resistance patterns.

Indian health care authorities need to formulate definitive protocols for treatment of latent TB that are based on local data. The first targets for treatment would likely be those who are at high risk for conversion of infection to TB disease, including young children who are exposed to contagious TB patients, health care workers, those living with HIV, homeless persons, prisoners and drug users.

Proper implementation of these protocols will be key, including ensuring patient compliance and easy access to medications. The Indian Council Of Medical Research recently announced a clinical trial for treatment of latent TB. However, many such trials need to be carried out and in a timely manner.

India can put an end to its TB ordeal. But sustained intervention and substantial allocation of funds by the government are needed. The Indian government needs to release definitive guidelines for treatment of latent TB and for quarantine. Additionally, it needs to ensure better implementation of guidelines including for the use of N-95 masks. Otherwise, India’s TB nightmare may end up as the elephant in the room that its burgeoning population problem has become due to the failure of the family planning initiatives. And in today’s globalized world, this will be bad news for the entire planet.

The author would like to thank Siddharth Varadarajan, the founding editor of TheWire.in, for helpful tips.

Jay Desai is a Assistant Professor at the University of Southern California. This article was originally published on The Conversation. Read the original article. 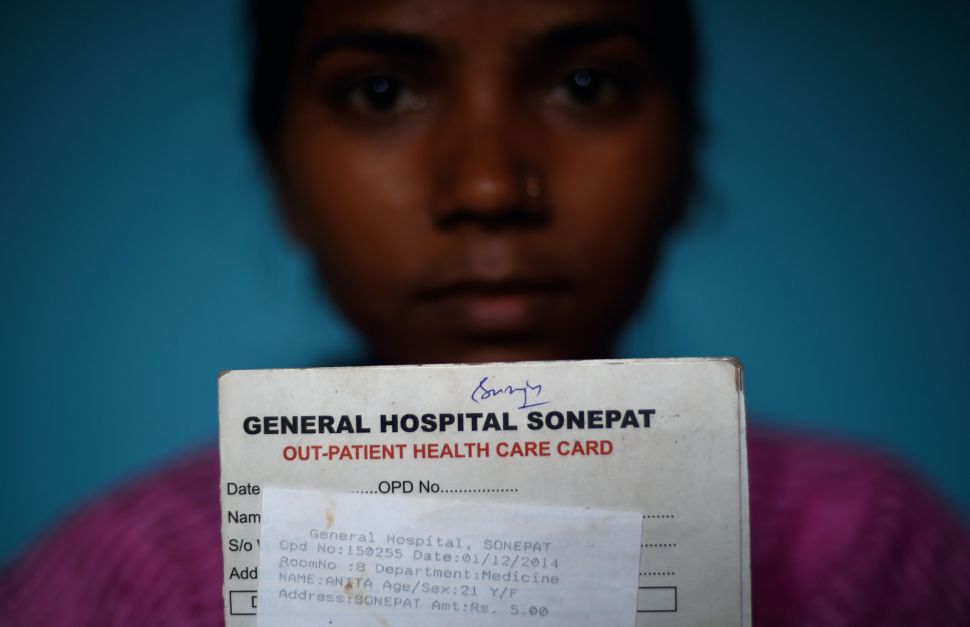