Millennials have neglected The Catcher in the Rye for seventeen years, and it’s time for a rebellion in the form of new interest and readership.

Fans of The Catcher in the Rye have cause to celebrate: Rebel in the Rye debuts this fall—a biographical drama exploring events that influenced Salinger before he wrote the iconic novel. What makes the film exciting is that it’s all about The Catcher in the Rye—a book that has seen better days in terms of readership and cultural presence. The film, starring Nicholas Hoult as Holden Caulfield, has received early attention online. The buzz depicts high school English teachers as ecstatic.

But the greatest significance of Rebel in the Rye might be that it has broken a long near-silence regarding the novel—in terms of positive comment, that is.

Millennials famously dislike “Catcher.” They are the first generation to dislike Holden since the book’s publication. They find him “weird,” whiny” and “immature.” (“Get a Life, Holden Caulfield,” The New York Times, 2009.)

In the 2016 Times Article “Why There’s no ‘Millennial’ Novel,” Millennial author Tony Tulathutte answers the question this way: “The ‘voice of a generation’ novel never existed to begin with. For starters, why did we ever pretend novels by straight white guys about straight white guys spoke for entire generations?”

Tulathutte dismisses several books on the grounds of racial elitism, including The Sun Also Rises, This Side of Paradise, Fear and Loathing in Las Vegas, and The Catcher in the Rye.

As a college instructor I have heard such logic countless times. A lot of Millennials challenge the legitimacy of the Western tradition, and therefore relieve themselves of the need to read anything at all, outside of their classes. Their ability to dismiss many thousands of books and art objects is one of the methods by which they remain innocent of art, literature, and history. And it’s no use to tell them Gabrielle Garcia Marques, James Baldwin, Louise Erdrich, Jorge Luis Borges—and many other great non-white authors—were steeped in this tradition by their own choice and passion. The Millennial will look at you as if you were insane.

All exceptions granted! Of course, some Millennials I have met think independently and read by their own lights. These bright ones seem to dislike the relentless, unstudied judgments of their generation. Many are fans of Holden Caulfield, who likewise felt alienated by his moment.

Holden is the best sort of rebel, to my mind—a quiet individualist. Though angst-ridden and critical of the culture, he’s intelligent, good-natured, and kind. He seeks out kindreds who see the world according to a singular vision, despite the influences of parents and teachers forever driving home the accepted program.

In his speech class, the students are taught to shout “Digression!” whenever a boy, in front of class, strays from the expected pattern.

“But there was this one boy, Richard Kinsella,” he tells Mr. Antolini, whose apartment he goes to when he’s run down and needs help. “He didn’t stick to the point too much…They kept yelling ‘Digression’ at him the whole time he was making it, and this teacher, Mr. Vinson, gave him an F on it because he hadn’t told what kind of animals and vegetables and stuff grew on the farm and all. What he did was, Richard Kinsella, he’d start telling you all about that stuff—then all of a sudden he’d start telling you about this letter his mother got from his uncle, and how his uncle got polio and all…It didn’t have much to do with the farm—I admit it—but it was nice.”

Holden burns to hear anything but the same cookie-cutter ideas that young people hear at school and elsewhere. He enjoys finding unusual people—and children of all kinds. He loves his creative little sister, Phoebe, and a girl who asks him for help with her skate key, and a little boy who chooses to walk in the gutter instead of on the sidewalk where his family walks.

What keeps his ample expression of fondness from the sentimental is the many remarks he makes elsewhere that are edgy and sometimes dark.

“People are always ruining things for you.”

“Grand. There’s a word I really hate. It’s a phony. I could puke every time I hear it.”

“Who wants flowers when you’re dead? Nobody.”

Here we see Holden’s whininess—or “negativity”—so unpleasant to Millennials. It must have also shocked conservative young people of the 1950s, who were allowed to speak negatively only about communism and lazy people and so on. Similarly, Millennials can get angry about race and gender issues and the like, but a “weird” person speaking as an individual about what bothers him—that’s off limits.

In fact, Holden’s criticism earns all the more trust because it’s deeply personal. Though he’s a child of a corporate lawyer, he never speaks in unison with his class. He has every privilege—and insists on wearing ties and fitting in—but risks his position by his behaviors, and certainly wants to avoid spending his life going up and down in elevators to some fancy job. Nor does he seize upon the ready truisms of a subculture. He’s no beatnik or bohemian, though he’s met with those and has neglected to emulate them. He articulates his own ideas, unafraid to stand alone—an exemplar to millions throughout the world.

The rebellion of young people is essential to an open society that allows individual speech and difference. I predict the children of Millennials, even if they are few, will rebel like few other generations have. They will love The Catcher in the Rye.

For now we look forward to Rebel in the Rye hitting the theaters, and hope more “Catcher” interest is forthcoming—more turning of those pages for the first time, more like-minded souls waking up in a sleepy cultural moment, and seeking in themselves what they believe, instead of doing as told. 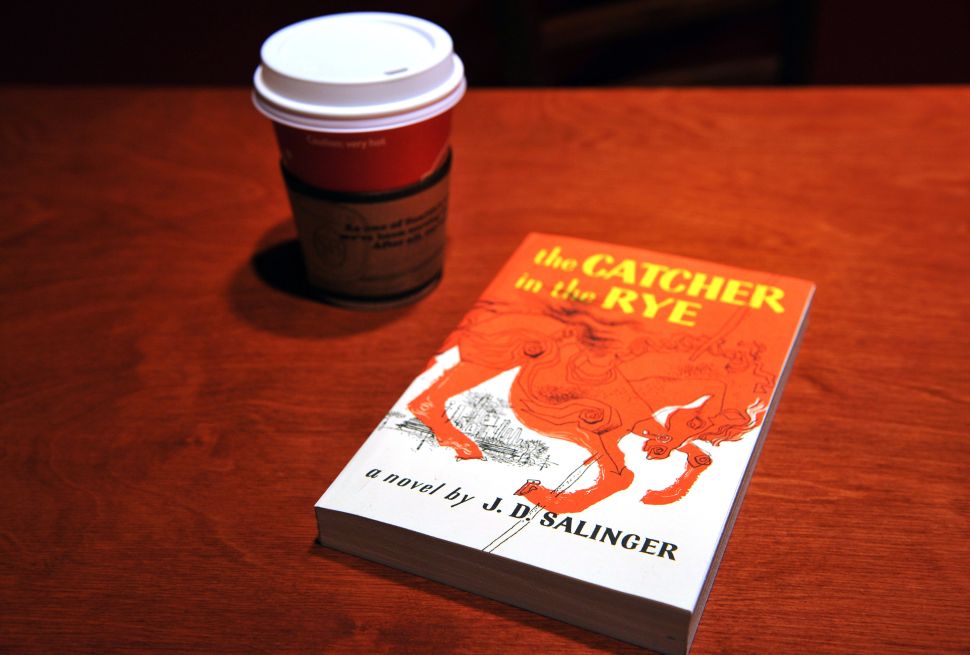