Governments have long waged a war on cash in an attempt to curb terrorism and tax evasion. Their focus has typically been on eliminating large denominations, like Europe’s €500 bill or India’s 1,000 rupee note.

Two U.S. lawmakers have a much smaller target in mind: the lowly penny, perhaps most commonly found in jars and underneath couch cushions but rarely used to actually pay for things.

Their complaint is that the cost to mint billions of these one-cent coins every year is costing taxpayers a small fortune.

The penny, the first currency of any type authorized by the U.S. government, was initially struck in 1787, though it didn’t become legal tender until 1856. Since then, more than 300 billion one-cent coins with 11 different designs have been minted.

Abraham Lincoln became the first U.S. president to adorn a coin when he was put on the penny in 1909 on the 100th anniversary of his birth (he wasn’t added to the US$5 until 1914). The Lincoln penny was also the first to include the inscription, “In God We Trust.”

Arizona Rep. Jim Hayes first tried to get rid of the penny in 1989, under the Price Rounding Act, and many others have urged its elimination since, leading the TV series “The West Wing” even to mock the debate in one of its episodes.

Former President Barack Obama lent his voice to the cause in a 2013 interview, in which he called the penny a metaphor for the government’s difficulty in getting rid of wasteful services.

The latest salvo came in March, when Senators John McCain and Mike Enzi introduced legislation to eliminate the minting of pennies. The bill also proposes switching the paper one-dollar bill to a coin and changing the composition of the nickel in order to bring down its cost. They said it would lead to an estimated $16 billion in savings.

The penny wouldn’t be the first form of currency the U.S. has eliminated. We got rid of the half-cent in 1857.

Why eliminate the penny

One of the most compelling reasons cited for getting rid of the penny is the fact that it’s become unprofitable due to inflation and the rising cost of metals. The U.S. Mint has been losing money on every penny it’s produced since 2006.

Last year, it cost the mint 1.5 cents to produce a penny, creating what in the coin world is known as negative seigniorage. That amounted to a loss of almost $46 million on the production of more than nine billion pennies.

The primary reason is the soaring cost of metals. The price of zinc, which currently composes 97.5 percent of a penny, has tripled over the past 15 years. Copper, which makes up the other 2.5 percent (and once was the sole ingredient), has risen almost fourfold.

The penny isn’t the only coin that’s underwater. The nickel, comprising three-quarters copper and one-quarter nickel, currently costs 6.3 cents to make – which is practically a steal compared with the 11 cents it cost in 2011.

Parts of the U.S. government have already stopped using pennies. The Army and Air Force, for example, have banned pennies since 1980 in all overseas military exchanges, where soldiers and their families can shop, because they were too heavy to transport.

Some countries have already banned one-cent and other low-value coins entirely. On a fairly recent trip to Canada, I bought a bottle of wine with cash and expected to get a few pennies back in change. Instead, the retailer simply rounded the price of my purchase up to the nearest nickel – pocketing the difference, which became the norm after Canada eliminated its penny in February 2013.

Australia got rid of its penny in 1992 and is expected to axe its nickel soon.

Penny opponents have other reasons besides cost. Some are concerned about the environmental damage caused by mining minerals for coins that are so little used.

Others, like physicist Jeff Gore, head of the advocacy group Citizens to Retire the Penny, are simply annoyed that we carry around pocketfuls of low-value coins, calling it “a big, horrible waste of time.”

Walgreen’s and the National Association of Convenience Stores tried to quantify that lost time in 2006, when it estimated that handling pennies adds 2 to 2.5 seconds to every cash transaction. If every U.S. adult made just one transaction a day, that adds up to more than 60 million in hours spent fiddling with change.

For the love of pennies

While killing off the penny may seem like a slam-dunk case, the reason we haven’t is pretty straightfoward: People love their Lincolns, as President Obama alluded to in a 2013 interview.

When polled about their feelings in 2014, the majority of U.S. individuals oppose the elimination of either the penny or the nickel. In fact, more than two-thirds said if they saw a penny on the ground, they’d stop to pick it up (which the New Yorker estimated in 2006 would take 6.15 seconds and pay less than the federal minimum wage).

Beyond sentimentality, however, there are a number of practical reasons to keep these coins. Retailers in countries that have banned the penny, as has Canada, are required to round cash purchases up or down to the nearest five cents. This means if a purchase is $1.01 or $1.02, then the merchant charges you only $1. If the price is $1.03 or $1.04, then the merchant charges $1.05.

This rounding algorithm is perfectly fair if prices are spread out evenly across the board. However, merchants usually set the price. This means that merchants who strategically set prices could make one or two extra pennies on every cash transaction.

Chipotle Mexican Grill tried this rounding method at some of its locations in 2012 to speed up lines. It faced customer backlash at the register when people were given less change than they expected.

Economists call this strategic price-setting a “rounding tax.” Penn State’s Raymond Lombra estimated that eliminating the penny and rounding purchases could cost U.S. consumers at least $600 million a year. Moreover, since the poor and disadvantaged use cash more than the rich, the rounding tax would fall disproportionately on them.

Others contend that sales tax and other variables lead to an even distribution of final digits that couldn’t be easily manipulated by a retailer. And some businesses, such as a drugstore chain in Israel, avoided the problem altogether by voluntarily always rounding down rather than up after the country killed off its lowest-value coin.

So where does that leave our dear, beloved penny?

I believe opponents’ primary argument, that we’re losing money on them, is unconvincing since the government squanders taxpayer dollars on many of its activities, such as the U.S. Post Office (which lost $5.6 billion in 2016) and countless billion-dollar pork barrel projects.

In addition, banning pennies is poor public policy because so many U.S. individuals adore the coins.

Rather than passing an unpopular ban, a smarter way to gradually reduce the use of low-value coins is to persuade a few major retail chains that do a lot of business in cash to round down purchases to the nearest five cents, like the Israeli drug store did.

Why would they do this? If the above estimate that handling pennies adds several seconds to every transaction is correct, then by rounding down, companies would increase the number of customers each cashier can handle and also make patrons happier. The increased productivity might even be enough to pay for the lost revenue.

Inducing people to transition away from pennies with small monetary bribes will be a far more successful strategy than forcing people to give up coins they like. 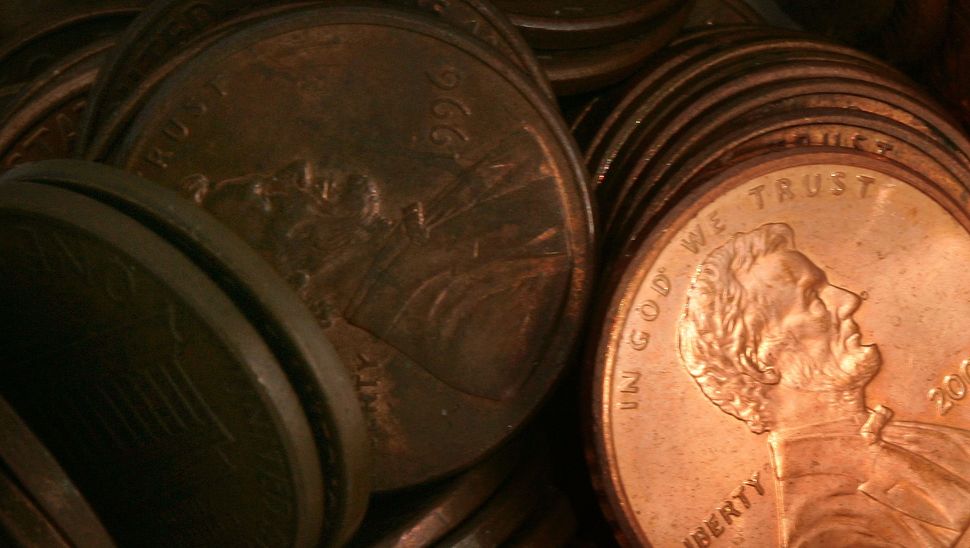