The US Open officially began on Monday night, and both dedicated tennis fans and casual spectators of the championships are flocking to Arthur Ashe Stadium.

Seats to watch the action are a coveted commodity, but being in one of the luxe suites is even better. The always lavish Emirates Suite is one of the most desired spots at the tennis tournament, and they’ve upgraded it even further this year.

It's Arthur Ashe Kid's Day at the #USOpen today! Our Cabin Crew are putting some smiles on the kid's faces 😄 Who's your favorite mascot? Check out our Instagram story from #AAKD! #EmiratesAce

“The inspiration behind the hospitality suite design is connections, bringing to life the connection between Emirates, the US Open and fans worldwide,” Emirates told the Observer.

This year, Emirates launched the #EmiratesAce social media campaign, which is for tennis fans to nominate their own “ace.” Per Emirates, an “ace” can be anyone, such as a guide or mentor, and the campaign includes potential prizes like tickets to Dubai or additional spots at the US Open Finals.

The roof might be closed, but the stars are still shining bright. Send a ❤️️ if you love Arthur Ashe Stadium! #USOpen #atp #tennis #grandslam #instatennis #instasports #grandslam #arthurashe #stadium

The Observer spent opening night of the US Open in the Emirates Suite, where guests flitted inside the suite and stepped outside to sit and soak up the prime view of the matches.

The suite is designed to look and feel like one of the Emirates’ famously luxurious plane cabins, complete with uniformed flight attendants from the airline greeting those entering the suite. This extends to the food and drink aspect of the suite, which is also the only suite to have a private sushi chef at the entire tennis tournament.

Emirates has a longstanding partnership with Moët & Hennessy—lasting over 25-years—and those who fly aboard Emirates experience the perks of this firsthand with the fine vintage champagne selection. Emirates Suite guests also got to enjoy those perks, and there was even a special champagne tasting, which took place in between cheering on favorites like Venus Williams, Rafael Nadal (#vamosrafa), Roger Federer and Maria Sharapova.

And those looking for a celeb sighting don’t need to go any further than Emirates—Lin-Manuel Miranda and Christopher Jackson watched Maria Sharapova defeat Simona Halep on Monday night, from the comfort of the suite. 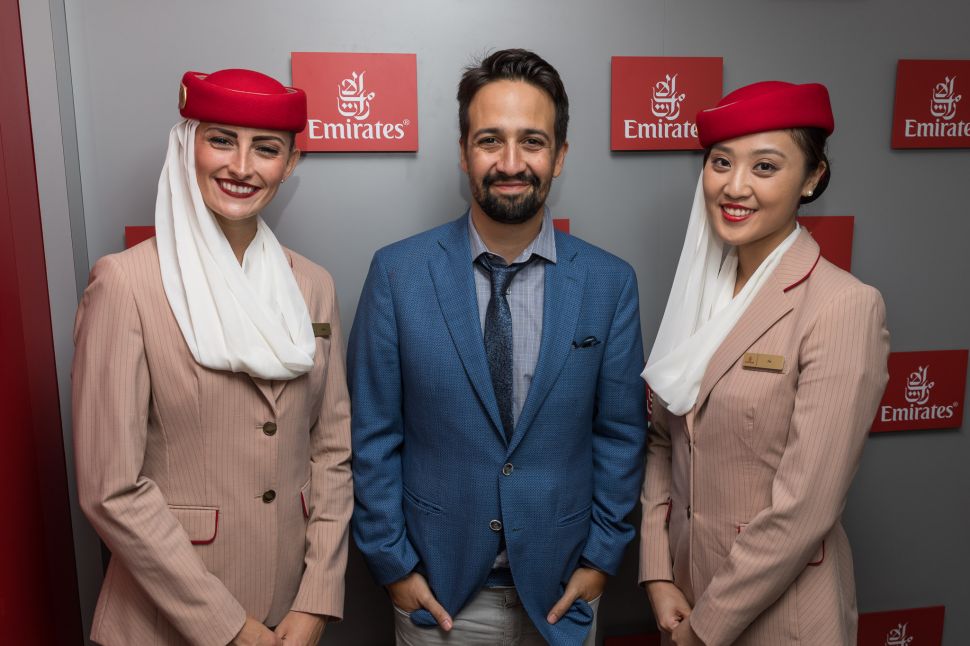