We used to put statues up, and we still can.

In the past weeks, communities have quickly removed Confederate statues as counter-protesters topple others. Word has spread through social media how to destroy them, should one be so inclined. This has reached farther than just the Southern states, with communities all over evaluating their monuments. As Ryan Holiday asked in a recent article, what should replace these monuments? It only takes a quick glance on Twitter to see many valid suggestions for Americans to memorialize who are more worthy than those we take down.

I say the answer is up to us. We can choose to fill the now empty spaces with historical figures that better reflect what we value.

One such figure is Wendell Phillips, a noted abolitionist and equal rights activist. Phillips was witness to an attempted lynching in 1835 as The Boston Female Anti-Slavery Society arranged for a speaker, even as pro-slavery groups posted hundreds of flyers offering $100 to the first person to assault him. The speaker cancelled his talk at the last moment and the society had to find a replacement. A lynch mob chased that person from the hall and placed a noose around his neck. Several people intervened but the events were witnessed by Wendell Phillips, greatly impacting his life and leading him into the abolitionist movement.

Okay, now that we’ve identified a potential candidate to be memorialized, what happens next? First you must sculpt an original work, likely from clay. This sculpture is then prepared to have a mold made, with a careful eye on the finer details and attention paid to its surface. Next the mold is painted onto the surface in layers, taking an entire day to dry for each layer. The mold is now removed and a wax is poured to create a replica of the original. The wax model undergoes a process to check for flaws which need to be repaired before being used to create a second mold from ceramic. The wax model and ceramic mold are heated up, melting the wax which flows out. Now the liquid bronze can be poured, allowed to cool and be removed from the mold. The bronze is inspected and any flaws are repaired. Before the sculpture can be installed it must undergo a process that oxidizes the surface called patination which ages and beautifies the surface. Finally, it is sealed against the elements.

This sounds like an arduous process and prohibitive for an individual to fulfill. And that’s partly why committees and groups are often formed to raise the money and complete the process. It can cost tens of thousands of dollars and take many months, or even years. The team behind the Robocop statue to be installed in Detroit has documented their challenges since the project was crowdfunded six years ago.  But surely, in the age we live in, there must be an easier way for you to have an impact or to honor someone you think history has overlooked.

Good news: there is. Over the past decade, 3D printing technology democratized the ability to manufacture and make things. Loaded with a 3D model of a historical figure, a 3D printer melts plastic filament, laying down material in layers which build up into that figure. If you can imagine a robot drawing with a hot glue gun, you’ve got the idea. These machines can build anything from prototype parts to statues to buildings and beyond.

When I introduce digital manufacturing to a group, I’ll ask the audience to raise their hands if they have a 3D scanner. Few, if any, hands go up. But the truth is almost everyone carries one. I point out that anyone with a camera phone is carrying a high resolution 3D scanner. With the majority of Americans owning a smartphone, they can digitize a physical object and make and distribute copies as they please. These digital copies can be manufactured using 3D printers, laser-cutters and more. By taking action through 3D printing and scanning, citizens can use public resources such as museums, libraries and schools, to download and print a bust and place it for public appreciation.

There are creative examples of this technology being used for public consumption. A “meshbomb” is a type of street art where an object is digitized, replicated with a 3D printer and made to share it’s space with it’s new copy. This technique, pioneered by Jason Ferguson, is used to draw attention to both the replica and the original. Could this be used as a type of graffiti to draw attention to the placement of a Confederate statue, to hasten its removal? “We need not wait to see what others do.”

If you want to fill these empty spaces here is what you can do:

That’s it. We can put up statues while the rest of the country takes them down. We can do something to memorialize the history we’d like to see get more attention—and we can do it all more easily than we ever have before.

Joe Carr is a lifelong digital craftsman and advisor to entrepreneurs. Joe helped start one of the first 3D printer retail shops in the world. He lives in Lansing, MI. 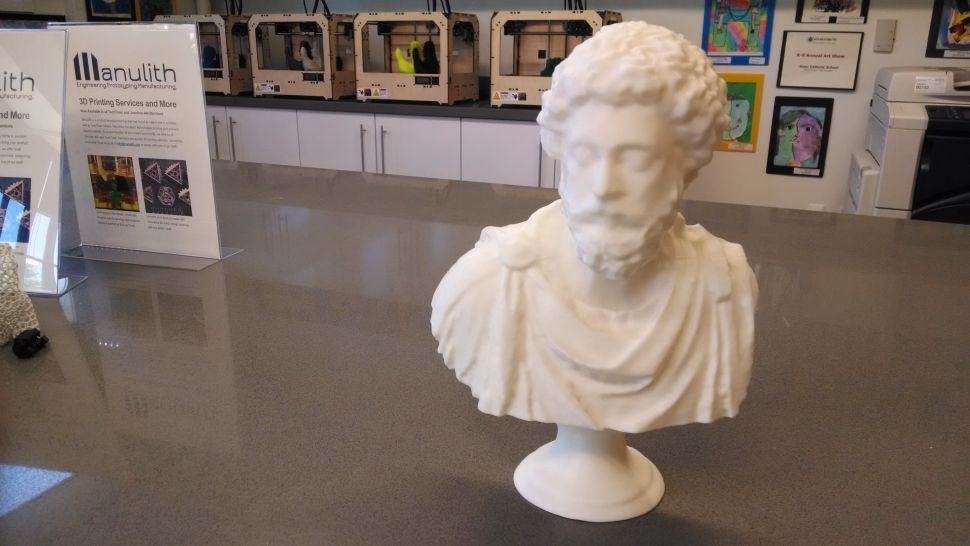