I drove a Bentley around for five days. It was beautiful. It was insane. It was a convertible. The car lay sleek and elegant, muted gray with a bright-red “St. James” runner that went from the front bumper around to the tail. If this had been an actress, it would have been Grace Kelly, or at least Emily Blunt playing Grace Kelly in a movie. It belonged in an immaculate private garage. Instead, it sat in my obscure middle-class Texas suburban driveway, covered in oak pollen.

The Bentley made its way down decidedly average streets for about a week. People stopped to take pictures. Trucks made way. Phones came out to photograph me at stoplights. Then when the light turned green, I peeled away smoothly, gone like a vision, a rich ghost. When you drive around a Lexus, people think, “that dude could be a dentist.” A BMW indicates that you’re probably a personal-injury lawyer, while a Scion XD means that you’re borrowing Lisa’s car. But Bentleys are the realm of lords. Or at least rappers.

The Bentley in question was the Continental V8 Convertible Black Edition In Extreme Silver, the flagship car of the Volkswagen Group’s most premium label. For our purposes, let’s just call it the Bentley, as in “dude is that a Bentley in your driveway?” Everything Bentley produces is hand-stitched by jolly artisans at the factory in Crewe, England. The “main hide” of my Bentley was “Beluga.” But that doesn’t mean it’s stitched from whale skin—the car isn’t that expensive—it just means that the Nappa leather is black. Then again, the red accent stitching was also Beluga, so I am lost on the distinction. Regardless, it was gorgeous, every touchable surface covered in soft, pliable leather, like the high-end snooker rooms of old.

Other outstanding features include amazing Mulliner LED approach headlamps, 21’ directional sports alloy wheels, ventilated front seats that massage you on the way to the merger meeting, and, of course, a four-liter V8 twin turbo engine, developed jointly with Audi, that yields a ridiculous 500-horsepower. Bentley throws a heavily modified, but still recognizable, version of this car into its racing series. This is no mere comfort machine. It costs $277,185, more than the median price of an American home. With that tag, it had better be a driving masterpiece. And it is.

One of the few benefits of living in Texas are the high speed limits on mostly-unused toll roads. I took the Bentley out to state highway 130, which allows you to drive 85 from Waco to San Antonio, a distance of approximately 150 miles. In the Bentley, I polished that off in an hour and a half, with few distractions and with the top down. What did I do to deserve this?

All Bentleys are nice, but this particular Bentley was a museum piece. Since I live in Austin, I went out to our big dumb beautiful racetrack, where Bentley’s team was limping around in the Pirelli World Challenge. A Bentley executive looked at my car and said “Oh, you got that one.” When I asked him what that meant, he said, “our dealers were fighting over it at Pebble Beach.” This was less a car to be driven and more a car to be collected. When you go to car museums and you see the masterpieces on the revolving platforms, they look like the car I was driving. This particular Bentley was eventually headed for cold storage, to be driven down the lawn while fans gasp at a combustion engine retrospective show in the 2080s.

Ironically enough, this car, given recent announcements from Bentley, already is a museum piece. Two criticisms: The Bentley I had, while fast and massively luxurious, felt front-heavy while in motion, as though the engine were trying to pile-drive the road. Second, it was so fuel-wasteful that the spec sheet comes with a $2,600 “gas guzzler” charge. You never want to see that.

A few weeks ago, Bentley announced plans for its 2019 Continental GT, the flagship of the flagship of the flagship. This will look like a bullet fired from a Bond pistol, but will also contain a V12 engine that gets more than 600 horsepower, and that engine will be moved back off the front wheels to make room for air-intake system that rivals that in Bentley’s racing cars. There goes the heavy drive, replaced by light, massive speed.

That doesn’t take care of the “gas guzzler” problem, of course, but Bentley has announced that an electric lineup is on the way, possibly as soon as 2020. So the car I was driving was already out of date. But the people I was passing on highway 130 didn’t know that. They moved over into the right-hand lane, to make room for their balding lord. 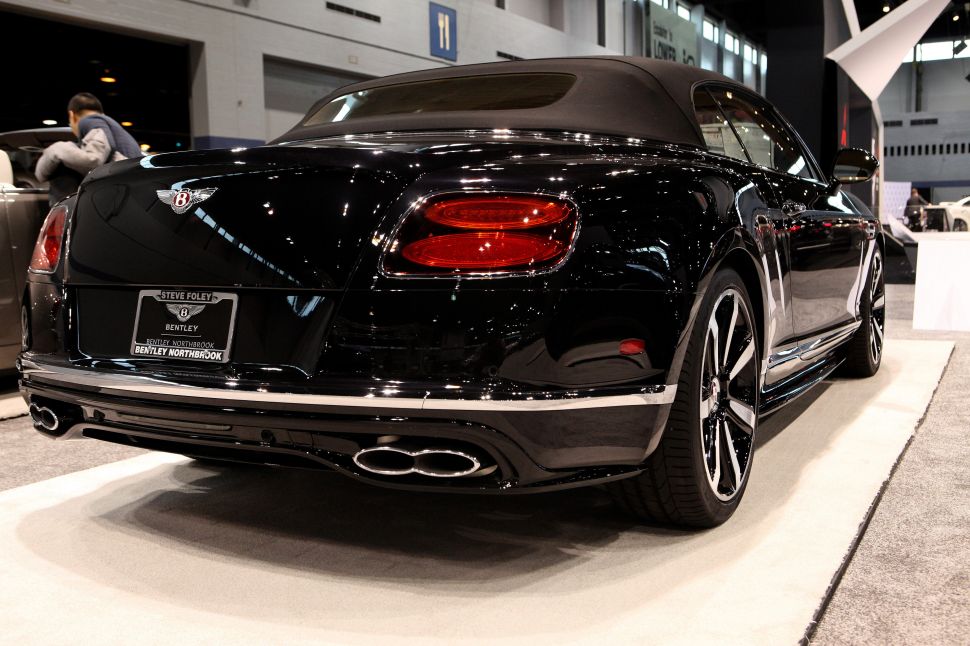