I was putting gas in the Mercedes G550 late on a Monday night after finishing third in a freeroll poker tournament (The G-Wagen was always thirsty, like a big metal baby) when a young couple came up to me. The woman was obviously indulging her partner, who appeared almost in tears. “This car…it’s so beautiful,” he said. “Can I touch it?”

Mercedes originally developed the G-Wagen as the perfect tank-like vehicle for climbing Saharan sand dunes. But these days it’s more of a conveyance for a Trader Joe’s and Talbot’s run. This particular one wasn’t the usual anonymous Real Housewives black. The color is described as “Paprika Metallic.” It was a stunning orange-red, announcing wealth, taste, and boldness. A friend described it as “a beautiful jewel box.”

“Hell, you can sit in it,” I said to the guy. The inside, with “porcelain” Nappa leather ventilated seats, was as cozy and roomy as the waiting room at a high-end talent agency. He couldn’t bear the idea of sitting in a car so amazing, so instead he ran his hand over the hood, petting it warily like it was some sort of precious mastiff. I popped the trunk to reveal a 4.0-liter biturbo V8. He nearly passed out, beholding the inner workings of world’s most luxurious and high-performing Euro-truck.

Normally, when I get a truck this good, with tread-heavy 19-inch wheels, an A20 adjustable suspension, a four-wheel electronic traction system, and three independent differential locks, I take it out to the offroad park up in Marble Falls, about 50 miles north of me. This G-Wagen could have hacked a level-three rock crawl, no problem. However, it also cost $136,375. They delivered it to me gleaming. I didn’t really feel like scratching up the metallic paprika.

But it also has many on-road uses. The G-Wagen stands 76.9 inches tall at its highest and contains a massive 79.5 cubic feet of interior storage capacity. It is massive and blocky. My wife had to hang an art show in another town. We loaded 25 paintings into the car, and there were room for at least 25 more. We had to pack in pillows and blankets to keep the art from sliding around. Of course, this isn’t a car an artist, or ten artists could afford. But let’s take the rich person’s equivalent of 25 paintings, be it ski equipment, lacrosse equipment, or dozens of weapons for warlords. They will fit magically into this ultra-large container.

And it drives tremendously well. The G550 gets 416 HP and 450 lb-ft of torque on a car that has a curb weight of more than 5700 pounds. It ripped down the highway and accelerated off ramps like a car half its size. There were no potholes or puddles that it couldn’t annihilate; this car is literally fine-tuned to be able to rumble down the side of a mountain. The suburbs present no challenge.

And while it’s certainly not a nimble car, The G550 is definitely not as hard-to-maneuver as a high-end pickup. It doesn’t suffer from the lugubriousness of the average luxury SUV that makes up its main competition in the marketplace. While it may only seat five comfortably, it’s also not an enormous, impossible-to-park Infiniti bus.

As with all Mercedes products these days, the G550 comes with excellent safety systems, including brake assist, blind spot assist, and a Distronic software package that foretells the day when it will be able to drive itself to the art show. Also, while I’ll admit I don’t know exactly what “Bi-Xenon Headlamps” are, they made it glow in the night like a big orange firefly.

On the negative side, and this seems to be the negative side for most high-end cars, the G550 is about as fuel efficient as an old tractor. It gets 13 MPG combined, which is shameful. The annual fuel cost is estimated at $3250, and you would spend $9250 more on fuel over five years than in an average car. You can touch it, you can pack your art into it, and you can admire it from afar. This would also be a perfect car in which to flee from a natural disaster. It can handle any weather condition. But you’d better be sure your tank and wallet are full. This precious jewel box needs a lot of attention. 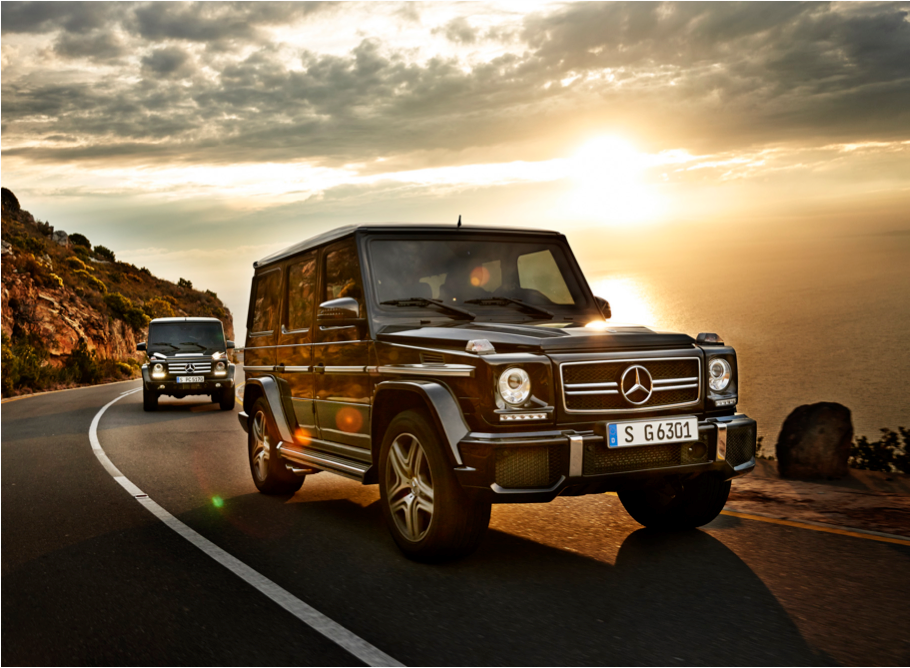