Small teams of journalists found some shocking behavior inside the ad-selling brains at Google and Facebook over the last couple days. Imagine how much more effectively these companies could be held accountable if hordes of people were brainstorming similar searches to check like the handful these reporters were able to do.

That’s the kind of activism the convicted activist journalist Barrett Brown wants to organize online, as the Daily Dot reported in August. Last night, he spoke to supporters of what he calls the Pursuance Project over YouTube, answering questions about his open source software project.

“Eventually what we want is super organisms. We want activist super organisms,” Brown told his listeners. He said an organism is a body that can move resources around to protect itself when something threatens its well-being or survival. “That’s essentially what a government is. This is different though. This is a shadow government,” Brown said.

Before we get into that, though, it’s worth saying a bit more about the Facebook and Google reports.

Yesterday, ProPublica broke a story that Facebook allowed ads to be bought against interests such as “jew haters.” Like Facebook’s dev team the morning after Snapchat launches a new feature, Buzzfeed reporters went on Google to see if it could find anything horrible to buy ads against. Guess what? They did.

… Type “Why do Jews ruin everything,” and Google will suggest you run ads next to searches including “the evil jew” and “jewish control of banks.”

Any awful phrase a user can think of is probably targetable on these platforms, because they cull the phrases from their users. It’s not like there’s some Google staffer brainstorming hateful search phrases that awful people might like to buy ads against. Some piece of software is watching the stream of searches and keeping track of phrases that pop up repeatedly.

That’s both how Google autocompletes your searches for you and it’s how it spots phrases to suggest to advertisers.

Now imagine teams of fervid volunteers brainstorming together to check every possible hate phrase on both sites?

It would drive Mountain View and Menlo Park insane.

Brown envisions his Pursuance Project as a task management scheme for groups of online activists. So using the example above, participants could log in whenever they want and start brainstorming new phrases to check. The system would already have a record of phrases that had already been checked, so no one would need to check the same phrase over.

“The point is to rekindle the adventurism,” Brown said last night. “It’s a means of being able to pay back what we’ve received.”

The project is accepting applications for its first cohort of online activists. It mainly wants to take on the police state and surveillance now. A big part of Pursuance’s work looks like it will continue the kind of thing Brown liked before he went to prison: digging through piles of pilfered or uncovered data and looking for stories of power that has been abused.

Steve Phillips, the project’s tech lead, said “Pursuance will be the only project in the world that’s task management and open source and provides end-to-end encryption.”

From there, explaining Pursuance gets kind of complicated. In short, it is structured so that people have to earn their way deeper into a particular project by building trust and proving their commitment.

This approach is likely to rub a lot of people on the left the wrong way. Speaking from experience, liberals tend to organize under big tents, where everyone has a voice and no one is turned away. It’s a nice concept, but it leads to lots of drama.

Also speaking from experience, activists don’t really like fighting the other side of any issue. What they really like to do is fight their allies who are “wrong” about one thing or another. Anyone who doubts it should just look at leftie political Twitter these days.

Even now, Team Bernie and Team Hillary continue to re-litigate the 2016 election, attacking each other for pursuing the wrong strategy. This is a waste of time for both sides. Active activists make up a tiny portion of the population. Each side would go further if they just ignored each other and focused on winning the mushy, ambivalent, apathetic middle to their side. That work gets somewhere eventually.

In the end, it doesn’t matter how complicated Pursuance is inside, so long as it’s easy to use. If Pursuance makes it simple for a new activist to have a rewarding experience of doing something and feeling like they nudged the ball forward, that will be enough.

Google is very complicated inside, but it’s very simple to use from the outside. If Pursuance can achieve something similar, its complex structure should be okay. And if the complexity undermines infighting between true believers, then that’s even better.

Anyone who’s ever organized a rally (and this reporter once organized a lot of rallies) knows that let-everyone-in-and-let-them-talk-at-once doesn’t work. What we’ve never known is what to do about it.

If Brown thinks he’s got a solution, we’ll withhold judgement and let him and his posse try.

Sound interesting? Then Brown has a closing message:

Think about what your role is going to be in the 21st century. Think about whether or not you have some duty and some ability to turn this back, to turn back what’s happening.

What we have didn’t just fall here. It was fought for. 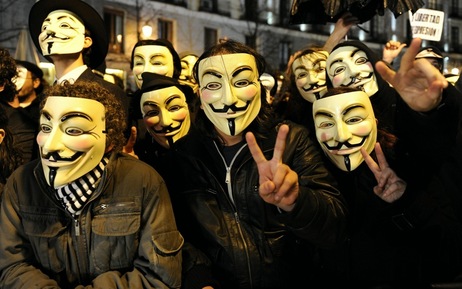