The city is investigating an incident in which an 18-year-old student fatally stabbed a 15-year-old boy and put a 16-year-old boy in critical condition at a high school in the Bronx late Wednesday morning.

At about 10:45 a.m., two males were stabbed in a fifth floor classroom inside Urban Assembly School for Wildlife Conservation in the West Farms section of the Bronx, according to NYPD Chief of Detectives Robert Boyce.

A 15-year-old boy was stabbed once in the chest and died at 11:25 am at Saint Barnabas Hospital and a 16-year-old boy — also stabbed in the chest — is at the same hospital and is in critical but stable condition, Boyce said. An 18-year-old student was immediately taken into custody, and a switchblade with a three-inch blade and a four-inch handle was recovered at the scene.

Mayor Bill de Blasio said that “all of our hearts are very right now,” noting that all parents worry about the safety of their children every morning.

He said that a full investigation is underway. The mayor noted that the city will look at the history of the school but that preliminary information indicates that it is a school that “thank god had been very safe.”

De Blasio added that the fatal stabbing marks the first time a high school student was killed in a classroom in many years or even decades, which he said makes the tragedy “all the more troubling.” He vowed to use “every measure to make sure that every child is safe.”

“My message to all my fellow parents is that you should know how intensely the NYPD works every day, including of course everyone at School Safety, and everyone at the Department of Education to protect our children and all of us are feeling this tragedy very personally because we know it is our mission to protect every child,” he said.

And he reiterated that they will be conducting random screenings on Thursday, among other steps.

“There will be immediately random screening done with metal detectors starting tomorrow and additional personnel will be brought in from School Safety tomorrow as well,” he said.

NYPD Chief Joanne Jaffe, who heads the Police Department’s School Safety Division, said that Urban Assembly — which she counts as one school because it is both a junior high school and a high school — and PS 67 share the building.

Jaffe said that it was determined that Urban Assembly did not need metal detectors, noting that roughly 75 to 78 schools in the city have “some type of scanning.” But she said that they are looking into whether the school should get metal detectors in the future.

Boyce said that the 18-year-old student “has made statements to us explaining what happened.” He said that the information that the Police Department currently has is preliminary, saying that facts are “still emerging in this case.”

“We believe that this argument, this thing has been going on for maybe two weeks into the school year and it escalated today after some back and forth within the classroom,” he said. “This was at third period, started about 10:15 so about half an hour into the class this fight erupted. That’s what we know now.” 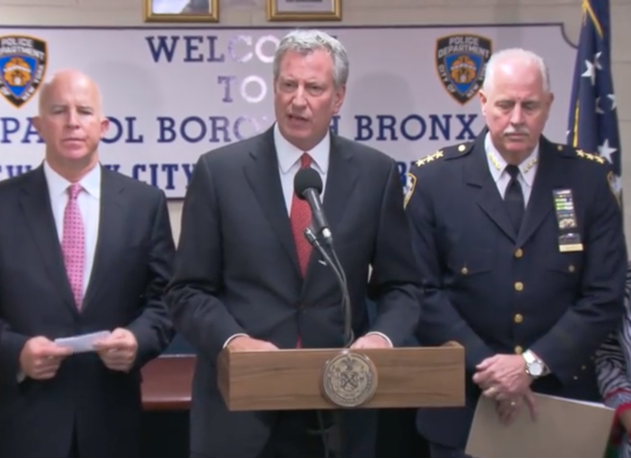