U.S. Reps. Adriano Espaillat (D-NY), Luis Gutiérrez (D-IL) and Raul Grijalva (D-AZ), along with City Council Speaker Melissa Mark-Viverito, were arrested in front of Trump Tower for a civil disobedience action that urged passage of the DREAM Act, which benefits undocumented youth brought to the U.S. in early childhood.

Last week, Schumer and Pelosi said they hoped to clinch a deal with Trump “as soon as possible” and reiterated that both sides agreed during a dinner at the White House that a border wall would not be part of the deal. Gov. Andrew Cuomo recently urged Democrats to “exercise extreme caution” in working out the terms of the agreement, warning that Trump could put forward a “cyber wall.”

“We’re here, this is a great roundtable discussion with business leaders, academic leaders and some of our congressional members from Illinois, from Arizona, from Brooklyn, and we’re here to talk about the DREAMers, and how we can coalesce around an agenda, a strategy,” Espaillat told reporters following  the “Moment of Truth: Where America Stands on Immigration” forum, where he announced they would be participating in a civil disobedience action.

Gutiérrez also told reporters that they were planning to partake in the civil disobedience action “to show a way forward.”

The way to protect undocumented immigrants, he said, is “by the millions of documented citizens in this country raising their voices for them.” He also said that he and other Democrats have been fighting for comprehensive immigration reform but noted that people can’t say they want that and not protect the DACA recipients.

The lawmakers and advocates subsequently marched to Trump Tower, Trump’s headquarters on Fifth Avenue, and sat in the middle of the street with their arms linked together. Police officers repeatedly told them that they would be arrested for disorderly conduct if they did not leave the street, but they remained seated and chanted repeatedly.

The City Council recently passed legislation expanding the role of the Mayor’s Office of Immigrant Affairs to increase protections for the city’s immigrants. The Council had been working on the bill for a long time, but the passage coincided with the ending of DACA. 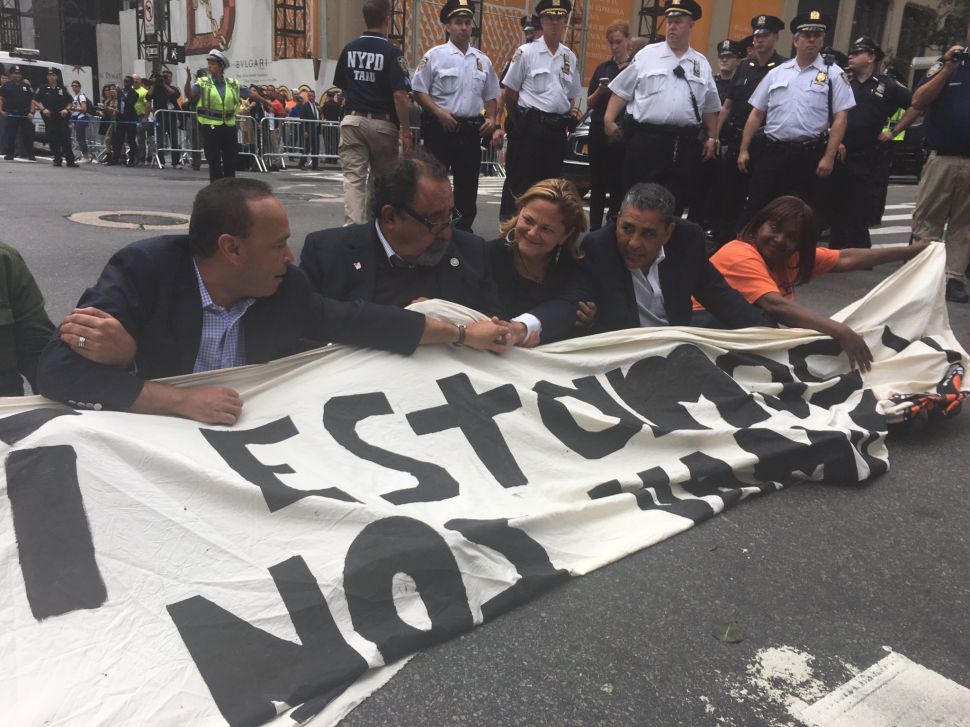