If you watched Sean Hannity and Rush Limbaugh shoot the bull for about 20 minutes Thursday night on Fox News Channel, you learned nothing about:

Instead of discussing such news on this “news” channel, these two right-wing propaganda kings cherry-picked only a couple of topics that might have been met with Trump’s approval. Limbaugh complained at length about how Republicans, who control Congress, are squandering their chance to dominate the national direction for decades.

And Limbaugh—a dedicated fan of the National Football League—said he’d play golf from now on each Sunday because he’s disgusted by the black athletes who protest police brutality by dropping to a respectful knee during the national anthem before the beginning of their games.

He also attacked the Republican failures to destroy the health care system or to ram through tax cuts to comfort the comfortable and afflict the afflicted.

“This is an embarrassment,” Limbaugh said. “A once-in-a-lifetime opportunity is being squandered… It’s an absolute crime what has happened here.”

Rather than blame the amateur president for his lack of policy details, his belligerent attitude toward even his allies, and his slippery grasp of legislative process, the celebrity broadcaster and admitted drug abuser—in a fanciful twirl of logic—blamed entrenched Republicans who fear what Trump success might mean.

“They can’t afford for him to succeed with his agenda,” Limbaugh said.

“The lid’s blown, the gig is over, the joke is revealed if an outsider with no prior political experience can come in and fix messes,” Limbaugh said. “How does that make them look? They can’t allow that to happen.”

Limbaugh appeared on the fourth day of the first week of Hannity’s new time slot—9 p.m. instead of 10 p.m. He now goes head-to-head against the liberal Rachel Maddow on progressive MSNBC. Her program, The Rachel Maddow Show, has surpassed all Fox shows in ratings recently as Fox has reeled from sex scandals, schedule shuffles and the departure of several stars.

One of them, Bill O’Reilly, was a Hannity guest this week, as was Steve Bannon, the ultra-right wing propagandist who recently left the White House to resume control of the extremist web site Breitbart News. Paul Ryan was Hannity’s featured guest on Wednesday, and Limbaugh’s recorded interview will conclude Friday night.

Trump last Friday started the football controversy at a Strange rally by telling a hooting Alabama mob that black players demonstrating peacefully were sons of bitches who should be fired.

Trump and his fluffers like Hannity say starting this dispute is a brilliant stroke by Trump because Trump comes out in favor of the flag, the anthem and soldiers while athletes or media who dare to oppose Trump must be against all those patriotic things.

Indeed, this ploy is brilliant if you don’t mind insulting black people with a lie and disrupting a major entertainment industry by pouring salt into one of America’s most painful wounds and gleefully rubbing it in. Hannity and Limbaugh do this for a living, and Trump has learned from them.

Limbaugh, who bragged about his lack of a college education Thursday, said he knows more about the NFL issue than the black players who have attended college and spoken up.

“I don’t even think they understand,” Limbaugh said, explaining that they are being manipulated by “The Left.” It’s all about being a manly man like Limbaugh, Hannity and Trump.

“They don’t like displays of patriotism, strength, rugged individualism,” Limbaugh continued. “And that’s why the players are being used here. They think it’s about police brutality.”

Both Limbaugh and Hannity agreed that such silly concerns over fatal police shootings of unarmed black men is exaggerated because black people kill other black people anyway so what’s the big deal?

LIMBAUGH: “More blacks are killed in Chicago by other blacks.”

HANNITY: “Nobody talks about it.”

Trump Fumbles Most Dangerous Plot Yet: A Cultural War He Can’t Win 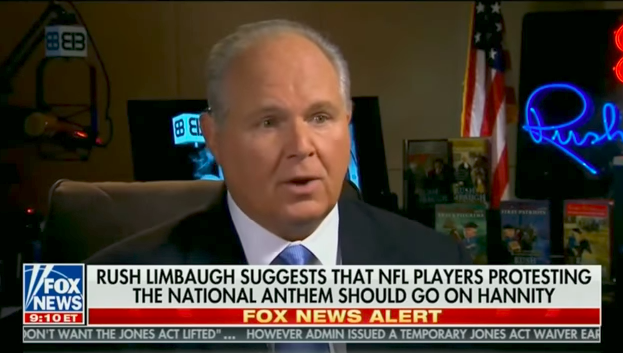