Near Mint, is our weekly comics column where we discuss all the KAPOW! that’s fit to print. This week: Harley Quinn hammers her way past 25 years at DC Comics.

It’s been 25 years since the clown princess of crime’s debut, and she remains a problematic fave for large swathes of comics fandom. Originally conceived by Paul Dini and Bruce Timm as a one-off henchwoman for the Joker in Batman: The Animated Series, her appearance so entertained the show’s creators that they brought her back for many episodes to come. Inspired by a court jester in a medieval dream sequence on Days of Our Lives, Harley Quinn is a former psychologist seduced into a life of crime by her beloved Mister J. To say the relationship is destructive is putting it mildly. “I never knew that you and I were finished… until that bottle hit my head,” Harley once crooned in the Batman episode Harlequinade, masterfully voiced by Arleen Sorkin. Is there value in Harley’s old punchline, a cautionary tale of a villainous loon in love with a psychopathic abuser? Or do those stories just normalize a brutal male-dominated culture? Harley shined brightest on Batman in narratives about breaking away from her beloved puddin’. Batman episode Harley and Ivy began a longstanding relationship between Harley and Poison Ivy that continues to the present, and the episode remains a standout entry in the profoundly venerated series.

At 25 Harley Quinn is relatively young when compared to some of the other mainstays of the DC pantheon, but she’s become one of the most famous figures in comics fandom, with her comics often outselling Wonder Woman and even Superman. Harley is such a popular choice for a cosplay that her image appears in the Western Cosplay section on Wikipedia. During my recent trip to Long Beach comic-con, it seemed pretty likely that Harley was the most common character on the convention floor. Even an ASMR relaxation video featuring an actress whispering sweet nothings in Harley garb has garnered over 1 million views.

And while the character started out a ride or die doormat, in the most current comic continuity she’s walked away from the Joker, perhaps permanently. Like another popular cosplay choice, Deadpool, Harley’s everything all in one: Funny, scary, clumsy, sexy, evil, good—the list continues as she oscillates between ditzy gun moll and cunning intellectual therapist. A kiss between Harley and Ivy in the pages of DC Bombshells took Harl’s longstanding relationship with the voluptuous eco-terrorist past mere Thelma and Louise style subtext. Harley’s personality is multiple choice, she can be (and love) almost anybody, and that makes it easy for fans to see themselves in her.

In honor of the occasion, this year’s usual Batman Day will be replaced by a Harley Quinn takeover next Saturday the 23rd, with a bevy of comics tie-ins and cosplay contests with more than 5,000 retailers and libraries participating, according to a statement on DC’s website. Check here for local events. Also,  DC released a Harley Quinn 25th Anniversary Special comic last Wednesday with contributions from a dozen creators writing a series of vignettes. Plus size books capitalizing on insignificant anniversaries are a dime a dozen but these stories kicked around in my head days after I read them.

The issue starts out with a trip to Vegas penciled by Amanda Conner in collaboration with her hubby, Jimmy Palmiotti. The pair has been behind much of Harley’s successful solo comics over the last several years, and Conner’s campy bounce now feels as synonymous with Harley Quinn as Bruce Timm’s deco noir style. The story ends with Harley taking down some human traffickers, making sure we know that, while still a bit nuts, she’s mostly on the side of the angels these days.

The second sketch, written by Harley co-creator Paul Dini, concerns her relationship with Mister J more directly. It’s Harley’s birthday and the Joker, in the midst of planning a yacht club robbery, can’t be bothered. Dini doesn’t try to make the Joker sympathetic, rather pivoting last minute with a strangely touching reveal. Harley covered a lot of ground on Batman: The Animated Series, but this was the first time I felt deep empathy for her situation.

The third story in the book had the slickest visuals, with glamorous pencils from David La Fuente that paired perfectly with a soft, fresh palette from colorist John Rauch. It’s a wacky short where Harley has to team up with Ivy and Swamp Thing to figure out how to stop a hurricane from hitting Gotham. While the meteorology tale is light and breezy, it’s timing couldn’t be more prescient.

The fourth and final bit, by offbeat writer Chip Zdarsky and artist Joe Quinones, draws a parallel between Robin and Harley that will make even Batman’s most die-hard fans look at him a little differently. Zdarsky finishes things up by letting us know that even though she’s with the Joker, this clown still has a lot of heart. A great ending to a compelling read centering one of DC’s youngest stars. 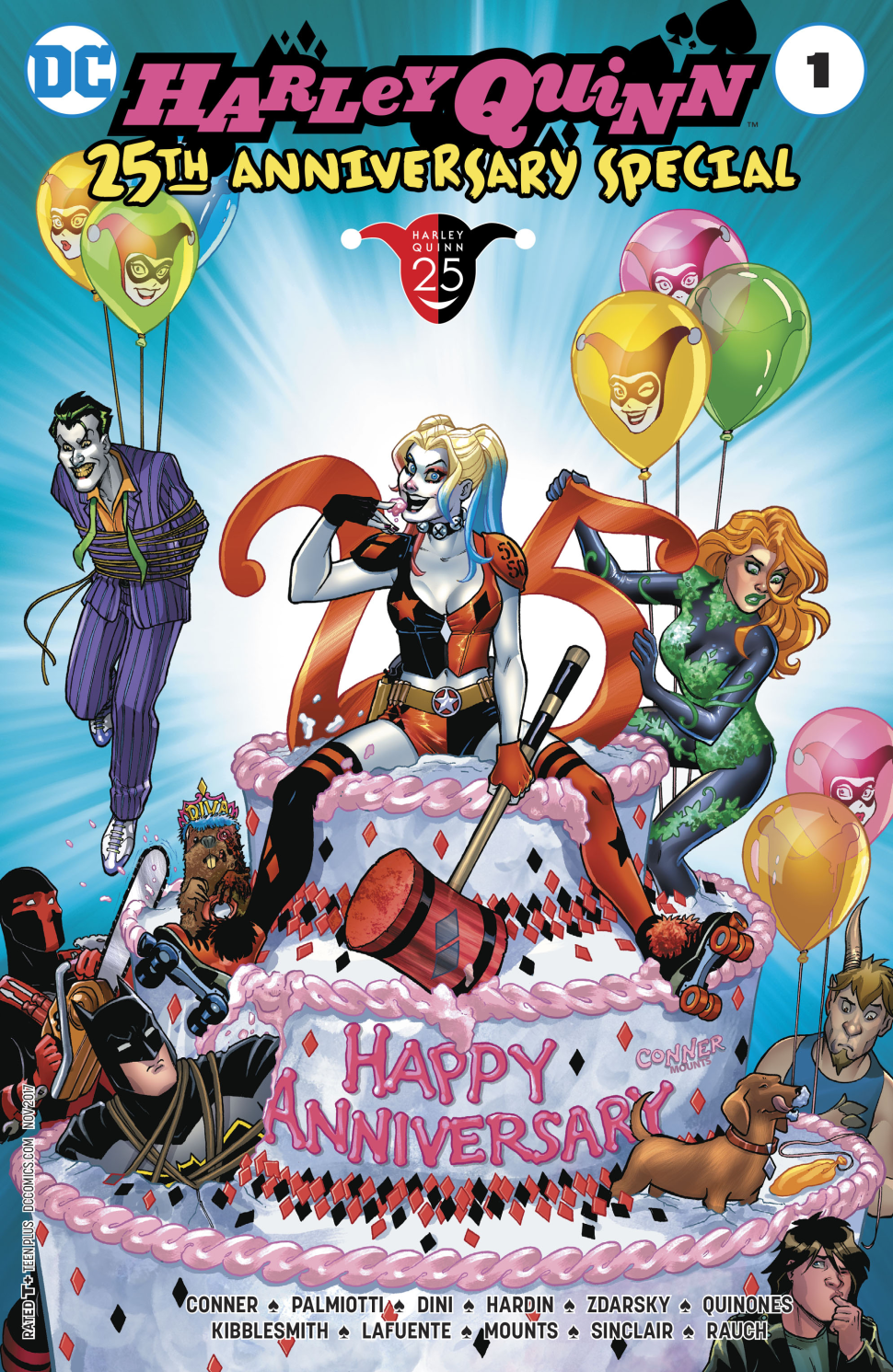