SpaceX founder Elon Musk is well-known for his crazy schemes, but his latest idea takes the cake.

In a speech today at the International Astronautical Congress in Australia, Musk proposed using SpaceX’s rocket systems for long distance travel on Earth. He claimed that the company’s latest “interplanetary transport system,” code named BFR or “Big Fucking Rocket,” could make international trips within 30 minutes and go anywhere on Earth in under an hour.

Musk used a dramatically scored video to illustrate the process. A group of people board a ship in New York, which brings them to a launchpad in the middle of the Hudson River. The passengers then board a rocket bound for Shanghai, over 7,000 miles away. The BFR swoops into the sky at 7:00 AM.

The vessel then rockets through Earth’s atmosphere, traversing the planet at a maximum speed of 16,777 miles per hour (Concorde jets have a maximum speed of only 1,354 miles an hour). It lands in Shanghai at 7:39 AM, alighting on a floating launchpad similar to the one SpaceX uses for its Falcon 9 rockets (which BFR would replace).

Other possible trips outlined in the video include New York to Paris (30 minutes) and London to New York (29 minutes). These journeys would cost about the same as an economy airline ticket and carry 80 to 200 people each.

But that’s not all: Musk also unveiled a plan to use the BFR for travel to Mars. He predicted that the system could also be used to launch satellites, send cargo to the International Space Station (ISS) and set up a base on the moon.

“It’s 2017, we should have a lunar base by now,” Musk said. “What the hell has been going on? That’s the…dream of Apollo that I think people are really looking for.”

The costs of these missions would be fairly low since the entire vessel is reusable.

If Musk succeeded, the BFR (which would weigh 20 to 50 tons) would be the largest vehicle by far to ever land on the Red Planet. NASA’s Mars Science Laboratory only weighed about 2,000 pounds.

There are still a lot of questions to answer about BFR before Earth or Mars journeys can begin, however. SpaceX still hasn’t flown a single human being into space, so it’s not clear what the customer experience would be like—the human body undergoes extreme stresses during interstellar travel. There’s also no information about how this new form of transportation would be regulated.

Musk has the “aspirational” goal of sending humans to the ISS by 2019, a BFR cargo ship (with no passengers) to Mars by 2022 and a human mission to the Red Planet by 2024.

Leave it to the man who’s running SpaceX, Tesla, SolarCity, the Hyperloop and The Boring Company at the same time to put everyone else’s aspirations to shame. 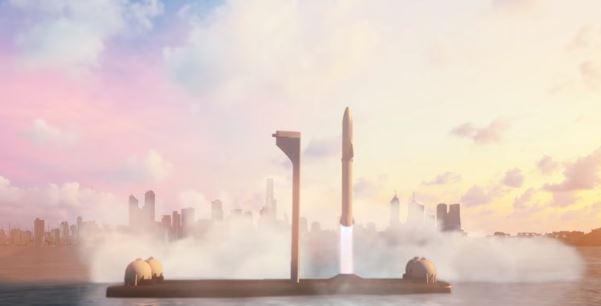